Lake County, Illinois was created on March 1, 1839 by an Act of the Illinois Legislature.

In June 1839, surveyors appointed by the state selected Libertyville as the location for the new county seat. The site they chose for a permanent courthouse was at the northeast corner of today's Milwaukee Avenue and Route 176. This site was never used for a courthouse.

The first meeting of the County Commissioners' Court was held at the Burlington schoolhouse on August 18, 1839. Without funds to build a permanent courthouse, the commissioners temporarily held court at the schoolhouse. By December of that year, the circuit court was being held in a "room provided and furnished by Dr. Jesse Foster... for $9."

In January 1840, Burleigh Hunt of Little Fort (Waukegan) made a proposal to provide a court room, two jury rooms, and furnishings. The commissioners agreed, and Hunt constructed a frame building on the west side of Milwaukee Avenue between Church and Division Streets. Hunt milled the timbers at his mill in Little Fort and transported the materials by horsedrawn wagon to Libertyville.

The commissioners leased this building from Hunt. On March 30, 1840, Hunt sold the building to Henry Steele of Libertyville for $500, who in turn rented it for use by the county. 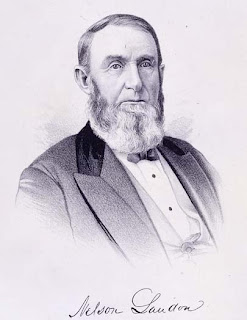 Even as early as 1839, there were rumblings to move the county seat to Little Fort. "The Little Fort Party" boosters made certain that a number of their supporters were elected to the Commissioners Court, including the very influential, Nelson Landon (1807-1884).

This group, no doubt, delayed any plans for a permanent courthouse in Libertyville. They worked to gather signatures on a petition for a special election to determine the location of the county seat between Libertyville and Little Fort. 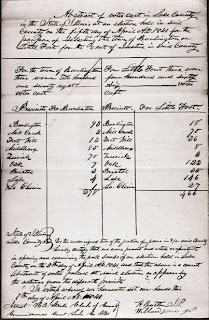 The main intent of the Little Fort Party was to make Little Fort a place of considerable trade. However, the economic boom was not instantaneous with the county seat's move. It took several years for the courthouse building to be completed, and for investors to arrive and build the piers that became the true economic engine for the town. 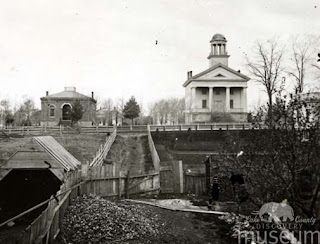 The first, permanent county courthouse was completed in 1844, by Benjamin P. Cahoon of Racine, Wisconsin. The building was Doric in style with its classical, columned architecture, and cost $4,000. The photograph above shows the recorder's office at left and first county courthouse at right on County Street, Waukegan, circa 1870. 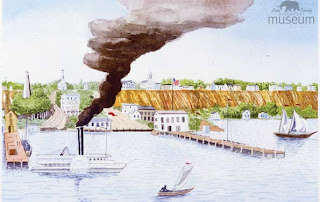 This painting depicts Little Fort around 1845, showing the courthouse inland from the bluff and a burgeoning community. By Tom Smith, LCDM Collection. 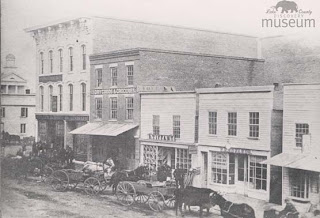 The view above is from about 1870 and shows the corner of Genesee and Washington Streets looking west with the courthouse at far left. By 1849, the town had grown so much that it wanted to do away with the "little" and changed its name to Waukegan, supposedly an Algonquin word for trading place.

In 1875, roofers repairing the metal-plated tower on the courthouse sparked a fire that destroyed the building. However, no county records were lost since they were archived at the recorder's office next door.

(above) Stereoview of the county commissioners sitting on the steps of the first courthouse after the building was destroyed by fire, 1875. LCDM 94.14.49

In next week's blog, the county's other courthouse buildings will be discussed.

Newer Post Older Post Home
Subscribe to: Post Comments (Atom)
Use of material on this blog must be properly credited and may not be published without written consent. Contact Diana Dretske ddretske@lcfpd.org Thank you!
This blog's subscription service has changed from Feedburner to follow.it. Current and future subscribers to the Lake County History Blog will receive new post notices from follow.it. New subscribers, please submit your email above.

Winner of Certificate of Excellence from the Illinois State Historical Society, The Bonds of War by Diana Dretske reveals the common soldier from the cataclysm that is the American Civil War. A photo in the Dunn Museum's collections inspired the author to uncover the remarkable story of five immigrants to Lake County, Illinois, who enlisted in the 96th Illinois. Available at SIUPress.com and the museum's gift shop.