Celebrated Waukegan-born author, Ray Bradbury, has passed away. Among Bradbury's most well-known novels are "Fahrenheit 451," "The Martian Chronicles," and "Something Wicked This Way Comes."

The Bradbury family's roots in Waukegan go back to 1847, when Ray Bradbury's great grandfather, Samuel I. Bradbury, came to Waukegan (then known as Little Fort). 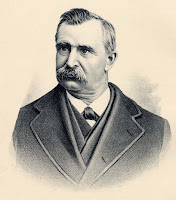 Samuel was a journalist and newspaper man, working on several publications, including the Lake County Democrat, and Lake County Patriot, which he established. After Samuel's death, his son, Samuel H. took over the newspaper. So, writing and a general curiosity about life was in Ray Bradbury's blood when he was born in August 1920. 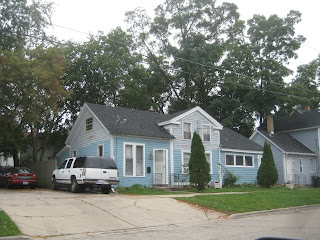 Bradbury family home on St. James Street where Ray Bradbury was born and grew up. Photo by Dan Kelly.

In 1934, after his father Leonard lost his job with the Waukegan Bureau of Power and Light, the family packed their belongings and drove cross-country to Los Angeles. The wonderful boyhood memories always stayed with Ray.

In 1957, Bradbury wrote "Dandelion Wine," turning those memories into the hyper-real story of his boyhood in Waukegan. In the book, Waukegan is called Green Town and the hero is 12-year old Douglas Spaulding, (a combination of his and his father's middle names. Ray's great grandmother was Mary Spaulding).

In "Dandelion Wine" Bradbury described the ravines of Waukegan/Green Town as "a pit of jungle blackness" where "all things without names lived in the huddled tree shadow." Anyone growing up in Waukegan and experiencing the ravines as a child can relate to Bradbury's sentiment. 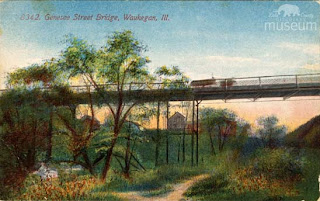 One of the ravines in Waukegan where Ray Bradbury trekked as a boy. Circa 1910 postcard.

Bradbury once recalled that in 1925, he and his brother went to see Lon Chaney in the movie, "Phantom of the Opera." It was evening when they left the theater and they decided to walk home through one of the ravines. He regretted it immediately, since the movie had been scary and the ravines were spooky after dark. Not to mention, his brother ran ahead and hid behind bushes and jumped out at him.

Bradbury was often drawn back to Waukegan, visiting every few years, and renewing a connection he had forged as a boy. 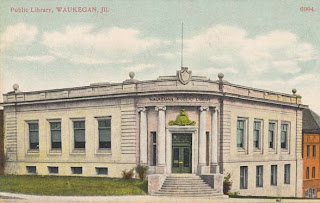 He was happy to participate in events, including lending his support to rejuvenate the Carnegie Library building, "where I lived from 1928 to 1934... in the children's room." 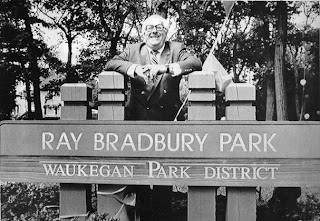 Bradbury at the dedication of Ray Bradbury Park in Waukegan, 1990.

In 1990, Waukegan honored him by dedicating Ray Bradbury Park (located south of Powell Park on Madison Street), and unveiling a bronze bust monument of him.

As Ray Bradbury once said, "A life's work should be based on love." He lived up to those words in his affection for his hometown of Waukegan, where he will be missed, but not forgotten.