In honor of National Police Week, this post is in memory of Officer William Petersen (1893-1922) of Winthrop Harbor, Illinois.
On , William Petersen, a farmer and the only law enforcement officer for , was killed while on patrol.
As he stood in Art Christensen’s auto repair garage along , he observed a speeding vehicle.

During Prohibition (1920-1933) bootleggers traveled through Lake County, Illinois along Sheridan Road from Wisconsin to Chicago. In addition to the vehicle going over the speed limit, Officer Petersen may have suspected the occupants of the "blue touring car" of being whisky runners.

Petersen pursued the vehicle on his motorcycle (which he owned personally), chasing the car for five miles through Winthrop Harbor and the City of Zion. Just south of Zion near Sheridan and Yorkhouse Roads, local farmers: George Pavlik, Lyle Fast and Melvin Jordan heard the sound of approaching vehicles and watched the chase.

As he drew close to the vehicle, Petersen yelled for the driver to stop. Just then a man wearing a Derby hat leaned out the back window with a shotgun and fired twice. Petersen was shot in the stomach, his motorcycle swerved into a ditch and he was hurled into a field.

The "murder car" drove away, and the onlookers ran to assist Petersen, and to telephone authorities in Waukegan.

Waukegan police said the register on Petersen's motorcycle showed that it had reached a speed of 72 mph in the chase.
Deputy Sheriff Wilson of Kenosha and his wife were driving to Waukegan when they happened on the scene. Petersen was placed in Wilson's car and driven to Victory Memorial Hospital in Waukegan (now Vista East) where physicians said he was dead before being placed in the deputy's car.

Headlines in the Waukegan Daily Gazette, January 14, 1922. Newspapers.com
George Pavlik went with police to to review mug shots while authorities in Lake and launched a massive manhunt.

On January 17, Petersen’s funeral was held in  at the Danish Lutheran Church where he and his parents attended services. It was the largest funeral the city had ever seen. Law enforcement officers from around the region attended, as well as friends, family, and World War I veterans with whom Petersen had served. He was only 28 years old.

On February 4, it was announced that three "foreigners" were arrested for Petersen's murder at Koller's Tavern at 1920 Allport Street, Chicago. The accused were John Bartole (driver of the car), Michael Radich and Ignatz Potz. Previously, three other men were arrested and released.

The shooter, Ignatz Potz, a woodworker by trade and native of Hungary, was a member of a gang with plans to rob a bank in . In a Chicago Tribune article, Potz claimed he was drunk on "moonshine" when the incident occurred, and that when someone in the car said they were being followed by a policeman: "I turned around and shot him. That's all I know. I was dazed for three days after that."
Potz was detained in the jail. Friends of Petersen from Benton and Newport Townships made plans for a lynching party to take justice into their own hands by going to the jail and forcibly removing Potz and killing him. When Sheriff Elmer J. Green got word of the men’s plans, he talked them out of it.


Potz was tried, found guilty and sentenced to death. The gallows were brought to from for the hanging, which was to be held on June 16, 1922. Invitations “to witness the execution” were sent out by the Sheriff’s department.
As preparations were underway for the hanging, Governor Len Small, commuted the guilty man’s sentence to life imprisonment. The governor initially stated that "important alleged circumstances not hitherto brought out had come to his attention."

During this time, Governor Small had his own troubles. He had been indicted for embezzling $600,000 from the state. On June 24, 1922, Small was acquitted of all charges, and later, eight jurors got state jobs.

In 1928, Governor Small pardoned Potz, who was released. Potz left Illinois for Los Angeles, California where in the 1930s he was working as an iron worker. Later, in 1928, Governor Small was indicted for having sold an estimated 500 pardons. He never went to jail, but was voted out of office. 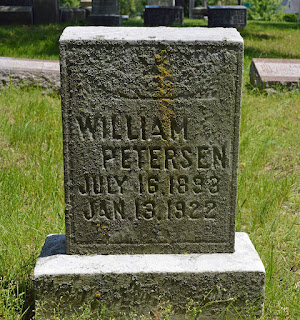 To celebrate the 30th anniversary of National Postcard Week (in the U.S.), I wanted to feature the incredible work of real-photo postcard publisher, the C.R. Childs Company of Chicago (1906 - ca. 1950).

In this region, one of the best known photographic postcard producers was the C.R. Childs Company. Charles R. Childs (1875 – 1960) was born in Elmwood, Illinois and worked for the Joliet Daily News before moving to Chicago to start his own commercial photography business about 1900.

By 1906, Childs was specializing in real-photo postcard views of Chicago's neighborhoods and suburbs, including Lake County, Illinois. He was on trend, recognizing the collecting phenomenon of postcards. His postcards were an instant hit with his ability to capture the essence of the subject being photographed.

The Lake County Discovery Museum has over 600 Childs' postcards and photo proofs of Lake County. The Chain O' Lakes region was a particular favorite of the Childs Company, probably because of the area's natural beauty, but also because it made good business sense to create postcards for the tourist trade.

Childs had a knack for capturing a moment in time such as the train arriving in Antioch or a farm thrashing scene in Lake Zurich. He was one of a few postcard photographers to become nationally known.

It is estimated that Childs, along with the photographers he employed, produced 40,000 to 60,000 different photo postcard views of the Midwest.

Today, Childs' postcards are highly collectible, and also give valuable insight to historians who consider his views documentation of life in the early 1900s.

In addition to the Lake County Discovery Museum, repositories with large C.R. Childs postcard collections include the Chicago History Museum and the Indiana Historical Society.

This week, Landmarks Illinois announced that it has placed the Mineola Hotel of Fox Lake on its annual 10 Most Endangered Historic Places list.

“This dramatically-sited building is intimately tied to the history of the Chain O’ Lakes region,” said Bonnie McDonald, President of Landmarks Illinois. “We hope that someone will come forward and bring it back to its former glory so that it may contribute to economic development efforts in Fox Lake.”

Making it onto the 10 Most Endangered Places list is quite the coup in the long struggle to get the Mineola, built in 1884, restored and protected. Though this does not guarantee its preservation, having the recognition and backing of Landmarks Illinois greatly increases the odds.

Since the inception of Landmarks Illinois’ Ten Most list in 1995, more than a third of the listed properties have been saved, less than a quarter have been demolished, and the rest are in varying stages between being continually threatened and rehabilitation.

For more on the history of the Mineola, check out my previous post.

The Landmarks Illinois website has more details on the history of the preservation efforts to save the Mineola, and information on who to contact to get involved.

Congratulations to the hardworking, enthusiastic folks of Save the Mineola!

Labels: Fox Lake, Landmarks Illinois, Mineola Hotel, Save the Mineola
Newer Posts Older Posts Home
Subscribe to: Posts (Atom)
Use of material on this blog must be properly credited and may not be published without written consent. Contact Diana Dretske ddretske@lcfpd.org Thank you!
Current and future subscribers to the Lake County History Blog will receive new post notices from follow.it. New subscribers, please submit your email above.