Dark Souvenirs of the Civil War 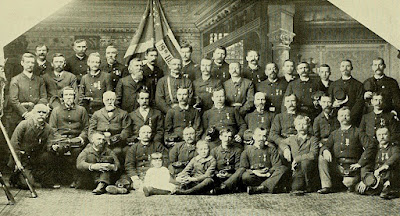 Members of the 19th Illinois Regiment, from The Nineteenth Illinois: a Memoir of a Regiment of Volunteer Infantry Famous in the Civil War, James Henry, 1912. At least eight Lake County men enlisted in this regiment.

A charged object or "dark souvenir" is an object collected to share as a witness to historic events such as a natural disaster or military battle. The term “charged object” is used by museums to denote artifacts “charged” or permeated with the energy of an event. These Victorian terms may sound odd to the modern ear, but still represent the sentiment of how people collected and preserved what affected them. 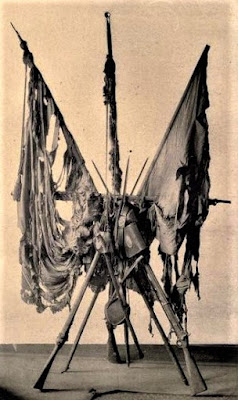 The bullet-ridden battle flags of the 96th Illinois Infantry as photographed for the History of the 96th Illinois Regiment, 1887. The regiment consisted of four companies from Lake County and six companies from Jo Daviess County, IL.
Battle flags, also known as the colors of a regiment, were one of the most common objects collected during the Civil War. By preserving and commemorating flags, charged with the energy of battle, the veterans of the regiment were able to honor the memory of their bravery and of their dead comrades.

The Dunn Museum has over two dozen charged objects in its permanent collections of which at least sixteen pertain to the American Civil War. In caring for these items, the museum takes into consideration age, condition, and provenance.

Provenance is particularly important, since without the object’s history we would not know its’ connection to an event or person. The Dunn Museum’s Civil War relics represent conflict, loss, suffering and death, and therefore need special consideration when exhibited. Collections staff take into account how to represent souvenirs of war to give proper context and respect for those involved. 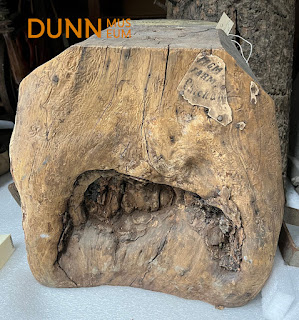 Tree stump from Kelly Farm (cannonball fragment not shown), Battle of Chickamauga, Sept 18-20, 1863. A paper note identifying the object is attached to the front right of the stump and was likely placed there after it was collected from the historic battle site. Dunn Museum, 2006.0.6 (1958).
Battlefields are rife with the memory of loss and victory. One object in the Museum’s collections is a tree stump taken from the Kelly Farm on the site of the Battle of Chickamauga, Georgia (September 18–20, 1863). The Battle of Chickamauga was especially significant to Lake County, since so many of its enlisted men fought there.
George Smith of Millburn with the 96th Illinois, wrote to his sister Susie after surviving the battle: "When I get to thinking about it I will choke and tears of gratitude come into my eyes to think that one of us after feeling such a storm of lead and Iron should have escaped, but such is the chances of every battle."

Chickamauga was the most substantial Union defeat in the Western Theater of the war, and had the second highest number of casualties of the war. At Chickamauga, the 96th Illinois suffered the third highest percentage of losses at 54 percent killed, wounded, or missing. The most casualties in a single battle of the war were sustained just two months earlier at the Battle of Gettysburg on July 1–3, 1863. 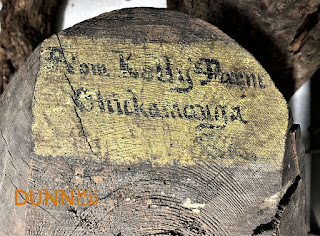 The Kelly Farm tree stump has an additional identification painted on top: "From Kelly Farm Chickamauga." Dunn Museum curators suspect this was done by Charles S. Bentley of La Grange, IL when the object was added to his Civil War relics museum in the early 1900s. Dunn Museum 2006.0.6 (1958).
Many veterans returned to the battlefields where they had fought to collect souvenirs such as bullets and tree stumps imbedded with shot. These items became touchstones for remembering and commemorating the war and were believed to be “charged” with the energy of the event.
According to historian Anna Denov Rusk, "soldiers collected items that told a specific story or part of their war experience."

A section of a wooden post (shown above) was sawn from the Andersonville prison stockade as a souvenir by Corporal George W. Healey (1842-1913) of the 5th Iowa Cavalry, Company E. The cavalryman became a prisoner at Andersonville after he was captured at the Battle of Brown’s Mill in Georgia on July 31, 1864. Healy and Billy Lewin were imprisoned at Andersonville during the same period, but it is unknown if they ever met, since the prison held tens of the thousands of men.
Healy likely collected the dark souvenir as a veteran returning to the site. In 1913, he presented it to Charles S. Bentley (1839-1924), veteran of the 2nd Wisconsin Cavalry, Company D, who had a Civil War museum in his home in La Grange, Illinois. The object came into the Dunn Museum’s possession through Robert Vogel, who purchased it at the auction of Bentley’s collection in 1958. Vogel, who founded the county's first history museum, undoubtedly understood the object's significance and connection to those who had served from Lake County.
One of the most compelling charged objects in the Dunn Museum’s collections relates to the funeral of President Abraham Lincoln. Just five days after General Robert E. Lee’s surrender to General Ulysses S. Grant at Appomattox Courthouse, President Lincoln was fatally shot at Ford’s Theater on April 14, 1865. 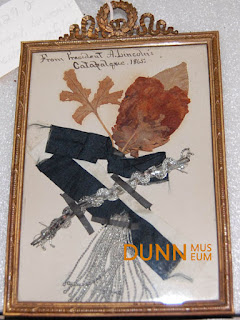 Posted by Diana Dretske at 3:51 PM No comments: