Begging, or trick-or-treating, is believed to have begun in the United States in the 1910s. Around the same time, costumes for children and adults became popular for Halloween parties. 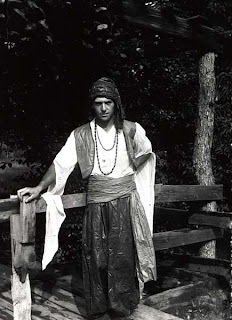 In this 1915 photograph, Diamond Lake resident, Gordon Ray, is wearing what appears to be a store bought costume (note the unusual fabric and crease marks). The photo was taken “the morning after” Gordon attended a masquerade dance in Long Grove.

I have often referred to this as Gordon’s “Valentino” costume, but in his autobiography he does not identify the costume, only the dance he attended. Also, Rudolph Valentino—the silent-film star—did not make his debut until 1921, six years after this photo was taken. It is also tempting to call this a “Lawrence of Arabia” costume, but again the association is too late. The British soldier, T.E. Lawrence, became known as “Lawrence of Arabia” for his role in the Arab Revolt of 1916-1918.

The Arabian-themed costume was probably a popular choice due to the West’s long fascination with Eastern cultures. Gordon would have seen any number of Arabian images in films, nickelodeon reels, vaudeville acts, books, and newspapers.
Posted by D_Dretske at 3:55 PM No comments:


The Lizzie Schlager Collection at the Lake County History Archives consists of 500 postcards from around the world. Elise Walters Schlager Wandel (1878-1928) was a Waukegan resident who collected postcards between 1899 and 1912. This was during the heyday of postcard collecting when you could purchase a postcard for a penny.

“Lizzie,” as she was called, saved postcards that friends and family sent. We know she was actively collecting them, because at least one sender wrote: “This is for your collection.”

Holiday postcards, particularly for Christmas and Easter were common. There are several Halloween postcards in the Archives’ collection. The fact that there are not more may suggest the lack of popularity in that holiday at the turn of the 19th century. In the 1910s, Halloween was an up and coming holiday and not near as popular as it would become by the 1950s, and certainly today. 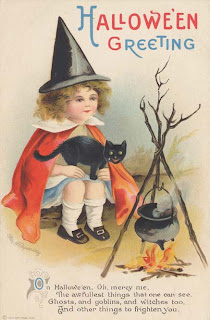 The two Halloween postcards shown here were produced by the International Art Publishing Company and designed by Ellen Hattie Clapsaddle. Ms. Clapsaddle (1865-1934) was a prolific postcard artist. She began her artistic life in 1885 as a china painter and also did home decorative painting. 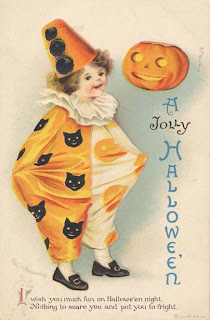 Her children-themed postcards are highly sought after. Other subjects she was fond of painting were landscapes, animals and Christmas scenes.

For more information on postcard artists check out Susan Brown Nicholson’s book, “The Encyclopedia of Antique Postcards.”
Posted by D_Dretske at 1:14 PM 2 comments:


With Halloween fast approaching, I'm sharing some holiday photos and postcards over the next couple of weeks.

Halloween costumes for adults and children became popular in the early 1900s in North America. 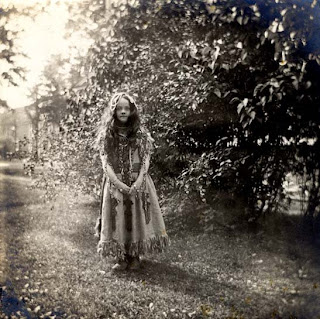 Shown here is an unidentified girl dressed as an "Indian Princess" circa 1905. The photo is credited to Bess Dunn, a county historian and photography enthusiast.

More than likely the girl's dress is homemade. There are three beaded appliques sewn to the front of the skirt. The appliques are reminiscent of detailing seen on women's dresses of this period or slightly before.

The costume is embellished with layers of jewelry. The girl's headpiece appears to be a string of pearls, and her bracelets have heart-shaped charms. The many beaded necklaces consist of shells and unknown materials. 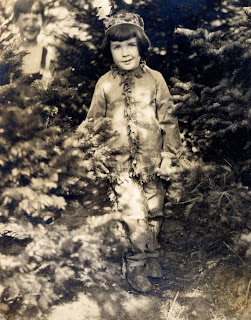 In this circa 1920 photograph (left) is one of the sons of Robert and Frances (Crane) Leatherbee of Lake Forest. Yes, that's a boy with a pageboy haircut, wearing a Native American inspired shirt and pants, and an embroidered pillbox style cap.

The photo was taken at Brae Burn Farm, Lake Forest, more than likely by Dorothy Gleiser, the daughter of the farm manager. The 400-acre gentleman's farm was owned by Robert Leatherbee, an executive of the Crane Company of Chicago. The family lived in a sprawling one-story stucco home, from about 1914-1922 before selling the property to a developer and moving to Cape Cod, Massachusetts.

As represented in these children's costumes, Native American culture was romanticized and appropriated by non-native peoples. Today, awareness of cultural sensitivity has led to discussions about the portrayal of Native Americans and their heritage in Halloween costumes and popular culture. 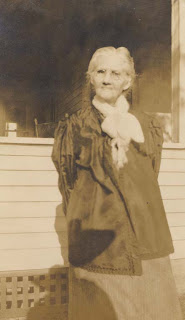 This pleasant photograph of Mrs. Thresa Davin Redmond was taken in 1918 by students of Everett School working on a community history project. She probably put on the blouse and scarf over her day dress to look more presentable for her young visitors. The students wrote: “It is a pleasure to visit Mrs. Redmond. She is so lovable, active, and quick witted, a laugh as ringing as a girl’s, and a keen sympathetic interest in her friends and neighbors."

Mrs. Redmond was born, Thresa Davin, in Meehan’s Settlement, July 15, 1838. The area was named for Michael Meehan who lived in Section 18 of Deerfield Township on Corduroy Road.

The name, Thresa Redmond, does not appear in county census records. However, there is an Anne Redmond living on Telegraph Road, born in 1839. Knowing that errors and variations on names were common in census records, it is possible that Thresa and Anne were the same person.
Posted by D_Dretske at 4:11 PM 1 comment:


Sweetener consumption has been on the rise in the U.S. and around the world for decades. Sugar, corn syrup, and Sucralose are just some of the sweeteners used in food and beverages. In the 19th century, the sweetener of choice was sweet sorghum made from sorghum cane.

This circa 1910 photo of the Charley Nordmeyer farm shows a sorghum mill. The farm was located north of Gilmer Road and east of Erhart Road in Fremont Township. Illinois was a large sorghum producer at this time. Not all farms had sorghum mills, but most produced sorghum for personal use or for profit. There was always at least one mill in the area for farmers to bring their cane to be crushed into juice. 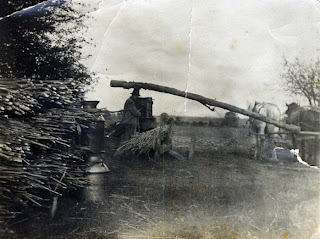 Seen here is George Schneider feeding the mill. The sorghum is stacked at left and fed into the mill by hand. The horses are the power source, walking in a circle to grind the cane. The juice is then collected in the metal "milk" cans shown in the foreground, and taken home to be cooked into sweet sorghum, also known as sorghum molasses.

The sorghum molasses was used as a natural sweetener, sometimes poured as syrup over hot cakes. The various parts of the plant left after crushing the cane could be used for livestock and poultry feed.

For more information on the tradition of sweet sorghum mills check out this interesting website on the preservation of the art of making sweet sorghum.
Posted by D_Dretske at 9:17 AM No comments: