"He was an ideal soldier, quiet, manly, religious, and exerted an excellent influence in the Company."  This description of Edward Murray was written in 1887 by Charles A. Partridge, comrade of Murray and editor of the History of the 96th Illinois Volunteer Infantry. 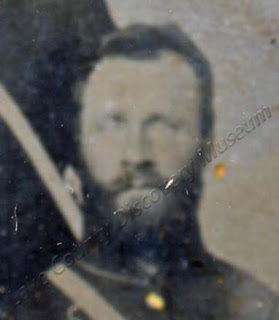 Detail of Edward Murray from a photo tintype taken in 1862. Dunn Museum 62.41.2
Edward Murray (1828-1900) was born in Glasgow, Scotland. He came to the U.S. in 1834 with his parents and siblings. The family first settled in New York State, and in 1841 moved west to Newport Township, Lake County, Illinois.
Murray lived at home until he married Mary Dixon (1833-1916) on January 27, 1853. Murray wrote: "I had built a large house that was only partially finished when President Lincoln called for 600,000 men in 1862."
In early August of 1862, Murray was approached by Captain John K. Pollock of Millburn. Murray later wrote: "I was in the harvest field working when a Mr. Pollock came to me and wanted to know if I would enlist. He said he was getting up a company and would like to have me put my name on his list and after some more conversation I did." 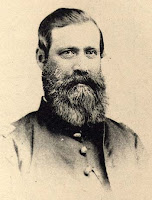 John K. Pollock (1829 - 1901) was elected captain at the organization of Company C, 96th Illinois Infantry, and as captain did much of the recruiting. Photo Dunn Museum 92.45.622
On September 2, 1862, "every member of Captain Pollock's Company" was ordered to come to Waukegan. Edward Murray was accompanied that day by James Murrie, J.Y. Taylor, William B. Lewin and Laughlin Madden, who were friends and neighbors from Newport Township. 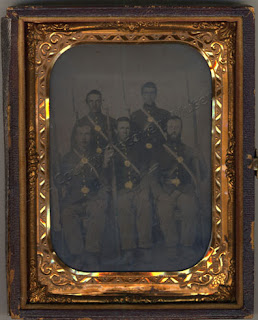 Seated left to right: William B. Lewin, Laughlin Madden, Edward Murray; standing left to right: James Murrie and John Y. Taylor. Dunn Museum 62.41.2
A photo of Murray and the men who accompanied him to war (above) and were his comrades in Company C of the 96th Illinois was donated to the museum in 1962 by Murray's grandson, Leland W. Simmons.
According to the 96th Illinois' regimental history, the Battle of Chickamauga, Georgia (Sept 18-20, 1863) was a battle of "tremendous proportions and fraught with mighty import."
Sergeant Edward Murray was wounded in this battle while re-loading his gun. Years later, Murray wrote: "a ball struck me between the shoulders near the right side of the spine so as to completely paralize [sic] my lower limbs and rendering me perfectly helpless while the battle continued."
Murray's comrades had to fall back, leaving him behind, but William Lewin tried to help. Lewin "threw his gun over his right shoulder and reached down to help me up. I caught it with both of mine but he could not move me. I was a dead weight. I had no power to help myself." Murray told Lewin: "Run Billy, I am all right," and Lewin did run.
As it became dark, Rebel soldiers came onto the field and carried three wounded Union soldiers to a fire, including Murray, and gave them blankets. Murray wrote: "That was a night stamped on my memory that can never be erased as long as life lasts... I lay there perfectly helpless with my thoughts centered on my far away home and my loved one and how, or when, or if ever I should see them."
Murray and other wounded Union soldiers were held by the Rebels. On or about September 27 "a Rebel came along with the good news to us that he was going to parole us and send us into our lines. I shall never forget the joy I felt."
After a couple of months in army hospitals, Murray's brother John was able to take Edward home. Once Murray received his furlough, the brothers took a train to Chicago and onto Kenosha, Wisconsin (the closest depot to Newport Township). They arrived home on Thanksgiving Day, November 28.
Murray later wrote: "I felt I was coming home helpless, when I went away strong." It took many months before Murray recovered his health, though he walked with a limp for the rest of his life.
Edward and Nancy Murray's great-great-great-granddaugther, Millie Ramsay, recently donated to the museum an American flag made by Edwards' mother in 1862 on the occasion of his enlistment. (below)

Photo of American flag made by Agnes Riley Murray on the occasion of her son's enlistment, 1862. (Dunn Museum 2012.22.1)
Agnes made the flag with 13 stars (rather 34 for the number of states in 1861) as a patriotic tribute to the original 13 colonies.
The Murray farm is now part of Van Patten Woods Forest Preserve. Edward Murray is commemorated on the Welcome sign at the preserve.
The story of Edward Murray and his comrades is now featured in the book The Bonds of War by Diana Dretske (2021). The book was inspired by the commemorative portrait in the Dunn Museum's collection, and is available at the Dunn Museum's gift shop and SIUPress.
Posted by D_Dretske at 3:21 PM 6 comments: