I happened across this photo of the cornerstone ceremony for the Waukegan Post Office, March 1, 1912. I was intrigued by the vantage point--showing more crowd than the cornerstone laying, and wondered what became of the building. 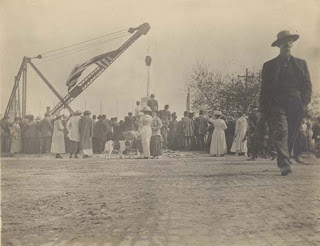 This is one of those images--a moment frozen in time--you feel like you could step into or perhaps the gentleman on the right might step out of. 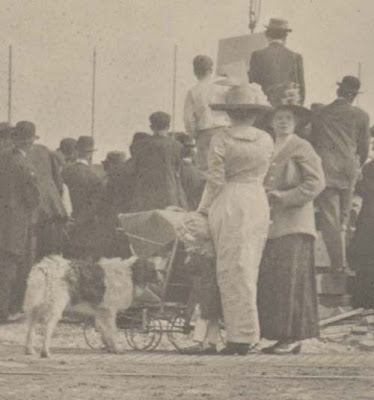 I scanned a close-up of the women at the center of the photograph. They fascinated me with their style of dress, the baby carriage, the child standing close to her mother, and the dog. Maybe they were strolling by, but more likely it was an event they planned to attend. 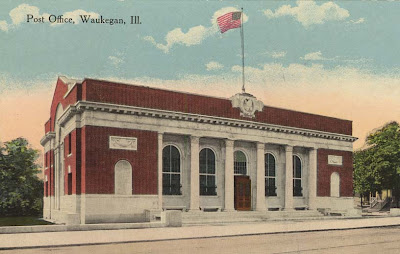 When completed, the post office was a beautifully ornate building. It was located at Washington and Utica Streets, and opened in 1914. There were about eight different post offices/locations in Waukegan through the years. 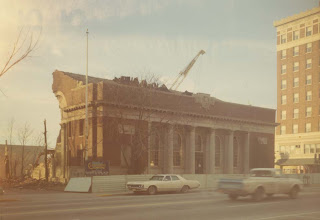 In 1933, another post office was dedicated at Julian and Genesee Streets. The former location on Washington and Utica remained a federal building until it was razed in December 1971, as shown here. No crowd of onlookers this day, but at least one person thought the event significant enough to photograph.
Posted by D_Dretske at 4:03 PM 2 comments:

As Dorothy says in the Wizard of OZ, "There's no place like home." That's how the staff felt when we discovered that the carousel horse in the museum's collection needed to make its way home to Kansas. 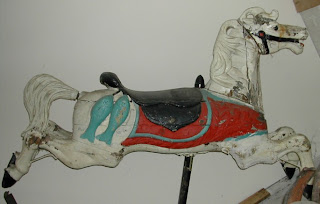 The process of deciding to transfer the horse to the C.W. Parker Museum took several months of research, debate, and board approval. Collections disposition is never taken lightly, and always with the utmost care and consideration.

The first step was to explore the horse's provenance. What was it exactly and where was it from?

We knew from our records that the horse was purchased in the 1950s by the museum's founder, Robert Vogel, when he stumbled across a small town carousel in Iowa being dismantled and sold-off. Confirmation that the horse had no real connection to Lake County began the debate of its disposition. If it doesn't have a Lake County story to tell, then where is it from, and what is the best repository?

Carousel horse enthusiast, Kay Schlumpf, assisted with the "What is it?" aspect of the research. After close examination, and photo documentation, it was learned that the horse was made by the C.W. Parker Amusement Company of Leavenworth, Kansas between 1914-15.

How do we know the horse was made by C.W. Parker? Well, for starters the front left shoe reads: C.W. Parker, Leavenworth, Kansas. But there are other telltale clues such as the legs in the "running pose," the bulges in the legs, depth of the elbow, the fish hanging from the saddle, the long low saddle, the short 'S' curve tail and the wide breastband.

According to the director of the C.W. Parker Museum, the horse appears to be a 2nd or 3rd row horse on a Parker carousel. It is most likely made of poplar or cottonwood, since those were common woods that the company used. It should be noted that Parker didn't actually carve the horses. He was the company founder and businessman of the operation. And interestingly, Dwight D. Eisenhower sanded horses for Parker in 1906 (too early for our horse), since the factory was across from the family home.

After much debate by collections staff (of which the horse's deteriorated condition was taken into account), it was agreed that the best place for the horse was Kansas--where it was made, and where it would be restored and displayed with other Parker horses. After receiving board approval, the horse is on its way home this weekend.

Of course, in the process of doing all this research and preparing the horse for its journey, staff decided it was only fitting to name her. And so, she was dubbed, Missy Lake. Lucky little horse didn't even have to click her hooves three times and say, "There's no place like home." We did that for her.

Be sure to check back. I'll keep everyone updated on Missy Lake's restoration progress at the C.W. Parker Museum.
Update - Aug 29, 2008: "Missy Lake," the carousel horse, arrived safely at the Parker Carousel Museum in Leavenworth, KS on Monday, August 25. After examining her, the Parker Museum's staff confirmed she is quite a beauty, and is a pattern they do not have. The restoration process will include fixing the joints, stopping the wood rot, and re-carving some of the missing parts.
Posted by D_Dretske at 4:01 PM 6 comments:

With the rapid development of the county in the last 20 years or so, the acreage devoted to farming has dwindled dramatically. The 2002 census reported that there are 337 farms in Lake County, totalling about 38,860 acres. However, most of those farms are not owned by the farmer. Instead, farmers lease land from landowners throughout the county to get enough acreage to make a living off it.

There are a few exceptions where families still work their own land, as I discovered on the Liberty Prairie Conservancy's "Secret Gems -- The Farms of Lake County" tour this past weekend. 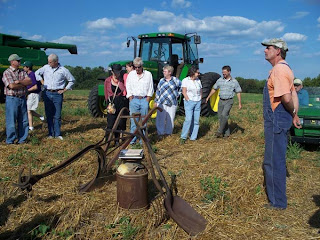 The Lodesky family has farmed their property for 165 years! In 1843, Franciszek Wlodecki (later the name was changed to Lodesky), settled in Lake County. He had been exiled from Poland following the "November Uprising" of 1830. He arrived in the United States in 1834, married Irish immigrant, Ellen O'Sullivan, and came to Lake County looking for land.

Sixth generation farmer, Joe Lodesky, (pictured at right foreground) led the tour of his family's farm. When asked about the future of farming in Lake County, Joe said that this was the first tour of the farm in 50 years. Decades ago, the local high school had an agriculture program that brought students out for tours. So, from Joe's point of view, hosting the Conservancy's tour was a good sign that people are interested again, and may be getting back to the land.
Posted by D_Dretske at 8:17 PM No comments: 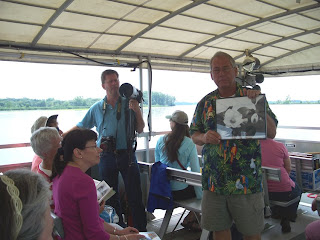 I toured Grass Lake and Fox Lake this week as a member of the Lake-McHenry Historical Alliance. This tour was a treat for the group who meet quarterly to support each other's efforts in preservation and museum work. As historians it was an incredible opportunity to learn more about a significant part of Lake County's past--the resort industry--from the vantage point of the lakes, and with a knowledgeable and very witty local guide.

Clem Haley, our guide, (at center holding picture frame), balanced the resort history with the history of lakes' ecology and present-day conversation efforts. 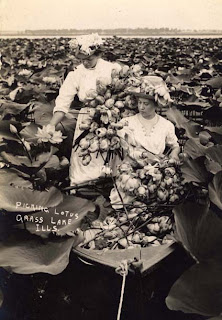 My view of the lotus was nothing like this spectacular postcard of Grass Lake from the 1910s. At that time, the lotus covered all of Grass Lake. Today, they are limited to an area of 200+ acres. In order to protect the beds, we viewed them from a distance, but the beautiful pale yellow blossoms were clearly in bloom.

One of the stories I like to tell people about the lotus is the "Legend of the Lotus." The lotus caused quite a tourism sensation from the 1880s to 1940s. Vacationers were drawn by word of their beauty and by the legend. The legend, created out of a combination of naiveté and marketing, stated that the lotus actually originated in Egypt and were brought to Lake County by bird or by an early settler. This myth made for great advertisements and was generally accepted as fact by area residents, but simply wasn’t true.

The lotus, known as Nelumbo lutea, or American lotus, grow not only in the Chain O’ Lakes, but also in Illinois’ major rivers and lakes and ponds, and shallow water areas throughout the eastern United States. 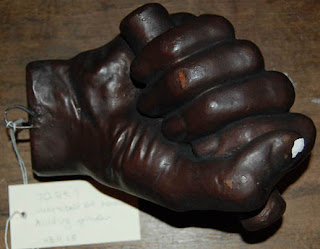 Casts of Abraham Lincoln's hands are commonly found in museum collections, even the Metropolitan Museum of Art has a set. I'm sure Lincoln would be surprised by the amount of memorabilia preserved in his honor--copies of the Gettysburg Address, lithograph portraits, busts, and so on.

The plaster casts of Lincoln's right and left hands from the Lake County Discovery Museum's collection (as shown), are copies made from the original bronze casts. The plaster casts were relatively inexpensive and widely sold throughout the country. No doubt a previous museum director thought them a necessary addition to the Museum's collection because of Lincoln's connection to Lake County. He visited here during his campaign for the presidency in 1860. 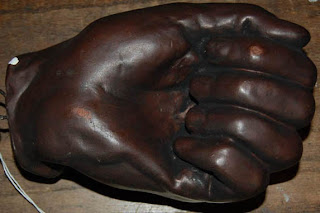 The original casts were made in Springfield, Illinois, in May 1860, by American sculptor Leonard W. Volk (1828–1895). It was just after Lincoln received the nomination for president and he had been shaking a lot of hands in congratulations. His right hand had swollen from giving and receiving so many firm handshakes, and to minimize this fact, Volk asked Lincoln to hold an object. Lincoln produced a broom handle and widdled the ends.

Despite the plaster casts having little monetary value, they are popular exhibition pieces, and are a reminder of the great respect Americans hold for Lincoln.
Posted by D_Dretske at 3:53 PM No comments: 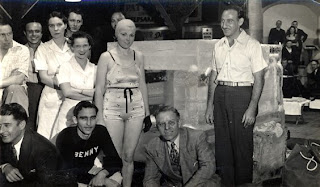 One event of human endurance that you won't see at the Olympics is the Ice Act.

Amid the endurance competition craze of the 1920s and 1930s, the Ice Act was a popular event in which a contestant was put into a block of ice. Four hollowed out ice blocks were put together with a person inside.

According to Frank M. Calabria in his book, Dance of the Sleepwalkers, a professional contestant was "frozen alive in 1200 lbs. of cold, frigid ice." Dressed only in a bathing suit, the contestant could not withstand contact with the ice for long. To increase the suspense of the crowd, Calabria said that the contestant was given a flashlight to signal. "When 50 seconds elapsed without an answering signal from within, the house physician ordered the contestant chopped out by the crew of men standing by."

The contestant would be treated by medical staff, warmed-up with a massage, and greeted by the crowd with cheers.

Pictured in this circa 1930 photograph is contestant, Edith Merritt. The location is unknown, but possibly Waukegan. Dance marathons and Ice Act events were popular throughout Chicagoland, including in Waukegan.

Edith's "trick" could be considered a forerunner to the extreme sports of today.
Posted by D_Dretske at 11:46 AM No comments: