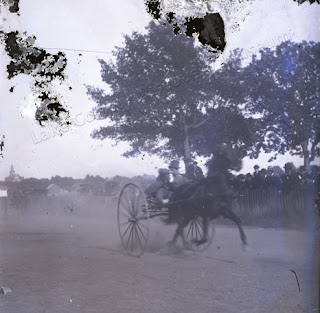 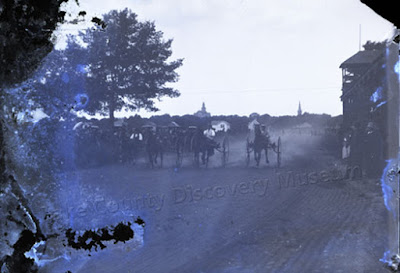 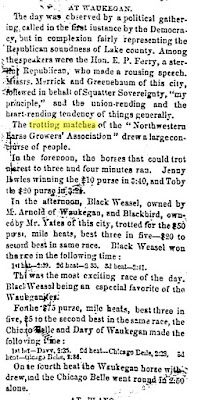 Chicago Tribune column on 4th of July activities at Waukegan
in 1860, including "trotting matches" at McKay's track.
Black Weasel, owned by Mr. Arnold, won $50 in the mile heat.
It was a given that county fairs needed a racetrack to draw crowds, and harness racing was a featured attraction. When the Lake County Fair moved to Libetyville the new fairgrounds included a racetrack.
From 1858 - 1881, the Lake County Fairgrounds were located at Milwaukee Avenue and Winchester Road (now Winchester House), and then at Appley Avenue (now Lake Minear) from 1882 - 1925. 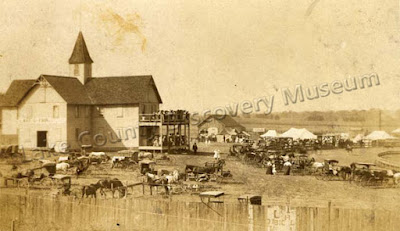 Lake County Fairgrounds and racetrack on the site of today's Lake Minear,
Libertyville, circa 1907 (BBDM M-86.1.655) 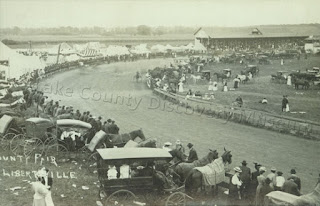 Another view of the Lake County Fairgrounds racetrack  with harness racers coming around the turn,
about 1910. (BBDM M-86.1.646)
In 1904, a new racetrack opened called the Libertyville Trotting Association Track. It was located on 100 acres west of Garfield Avenue and south of Route 176. Locals often refer to this track as the "one-mile track," although all harness racetracks are required to be one-mile. 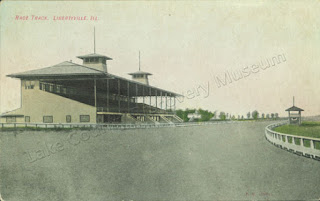 Libertyville Trotting Association Track in use from 1904 - 1918. This colorized postcard is from about 1914 and shows the track during its motorized race days. (BBDM M-86.1.658)
For the first several years, the Trotting Association Track featured harness racing, and then was used as a training track for harness races. By the 1910s, the popularity of automobile and motorcycle races monopolized the Libertyville track, and harness racing's popularity began to wane. In 1918, Samuel Insull purchased the property and closed the track.
One of the regionally known trotters was King Heyday (1891 - 1919), owned by Edward and Charlotte DeWolf of Waukegan. (pictured below) 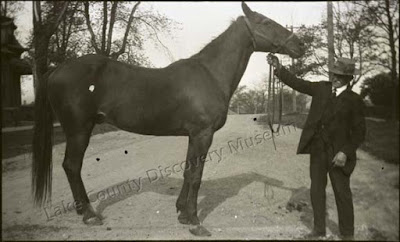 Edward Dewolf with his prize trotter, King Heyday, circa 1910.
King Heyday was foaled on August 18, 1891. (BBDM DeWolf Collection)
Edward DeWolf (1848 - 1927) was an influential businessman in Waukegan, a promoter of the Electric Railroad line, and a mayor of Waukegan (1895-97). He was a lover of history, historical preservation, nature, and a keen horseman. He and his wife, Charlotte, owned several trotting horses, but King Heyday was their favorite. 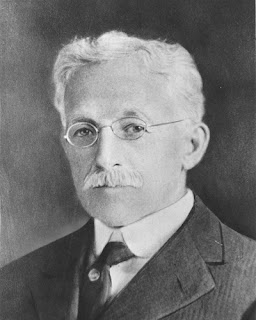 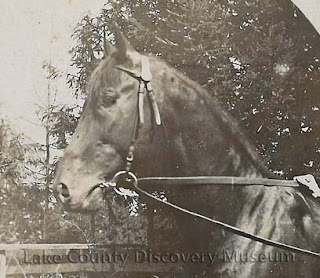 Prairie King (King Heyday's sire), photographed in 1890
at the Swanbrough Stock Farm. (BBDM DeWolf Collection)
The stock farm was owned and operated by John W. Swanbrough (1843 - 1924), who fought with the 96th Illinois in the Civil War. Swanbrough was a member of the Illinois Association of Horse Breeders, and served as Lake County Sheriff (1876-1886).
With the popularity of harness racing came the need to breed trotters or "standardbreds." The term appeared in 1879 based on the racing standard of a one-mile track and standard time of 2.5 minutes maximum. A horse bred to these standards was "standardbred." 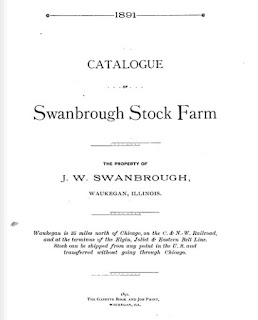 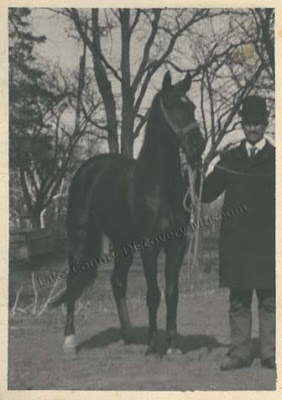 King Heyday with Charles Heydecker, circa 1905.
Heydecker bred and owned King Heyday's dam, Mabel H.
(BBDM DeWolf Collection)
Edward DeWolf called King Heyday: "the handsomest horse that I had ever seen" and "a horse with remarkable speed."
King Heyday took his record of 2.17 at the Milwaukee Mile. DeWolf boasted: "his mile really being in 2.13." The Milwaukee Mile was a private horse racing track established by 1876. In 1891, the property became the permanent home of the Wisconsin State Fair.
Charlotte DeWolf loved "driving" King Heyday, whom she nicknamed "Punch." She took him out every day, except Sundays, for a drive in a carriage or sleigh. (pictured below) 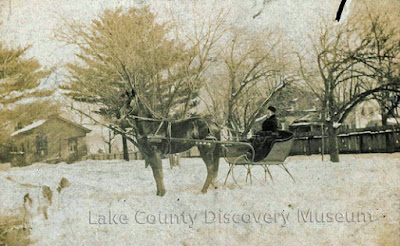 Charlotte DeWolf being pulled in a sleigh by her beloved King Heyday, nicknamed "Punch."
The DeWolf's setter, Laddie, is barely visible at left. (BBDM DeWolf Collection)
According to DeWolf, King Heyday was "Charlotte's pet, and he seemed to understand and return the love she had for him." 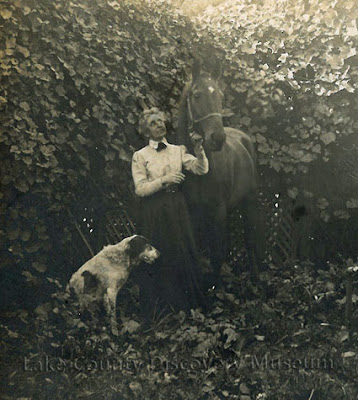