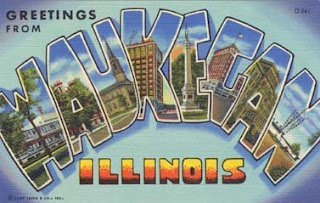 This year, Waukegan celebrates its 150-year charter as a city. This large letter postcard from the collections of the Curt Teich Postcard Archives exudes the vibrancy of 1950s Waukegan.

Waukegan's history goes back to at least 1695, when it is believed a trading post existed on the bluff overlooking Lake Michigan, in the area of today's Sheridan Road and Water Street. The post would have facilitated the fur and silver trade in northeastern Illinois. A map by surveyor Thomas Hutchins, published in 1778, records this location as "Riviere du Vieux Fort," and a year later the journal of ship's captain Samuel Robertson refers to the site as the "petit Fort."

The remains of a decaying structure were found by settlers in 1835, and the new settlement was named “Little Fort.”

Despite its key location on Lake Michigan, Little Fort remained quite small until 1841, when a countywide vote relocated the county seat here from Libertyville. 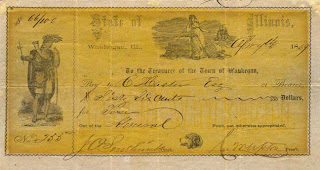 In 1849, the community reached a population of about 2,500, and it incorporated as a village and changed its name to Waukegan. The designation “little” was no longer satisfactory, and the Native American equivalent--Waukegan--was agreed upon, meaning “fort” or “trading place.” In 1859, this receipt (above) was issued from the town's treasurer. By then, the city had grown to 3,400 inhabitants. The Native American image on the receipt seems to represent the town's name, and the woman with goods and a ship behind her represents trade and commerce. 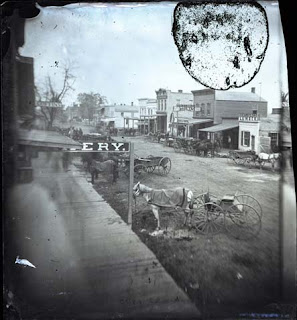 When this photo was taken on November 22, 1870, Waukegan was a hub of commerce. It was connected to Chicago by train, and its port was one of the busiest on the Great Lakes. The view is Genesee Street south of Madison Street. 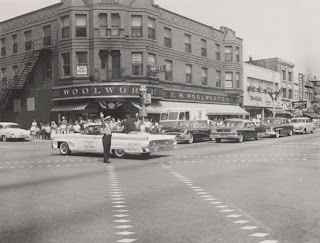 The city's centennial was celebrated in grand sytle in 1959. Men were encouraged to grow beards, in remembrance of the city's founders.

Favorite son, Jack Benny, was brought back for his very own "Jack Benny Day." Here are two Chicago Tribune photographs by Ford Wilson of "Waukegan's Own" Jack Benny. Note Jack Benny sitting on the backseat of the white convertible designated his "personal car." He's being driven on Genesee Street in downtown Waukegan. In the second photo, his car appears to be led by a police color guard.
Posted by D_Dretske at 2:09 PM 3 comments:


St. Patrick's Day is traditionally a religious holiday in Ireland. The celebratory nature of the day was created by Irish immigrants to the United States as a way to retain their Irishness and ease the transition into American society.

The Irish immigrated to the United States beginning in Colonial times, but the largest wave came between 1820 and 1880, when almost 3.5 million Irish arrived, among them my ancestors from County Meath. These millions left their homeland for many reasons including poverty, famine, religious prejudice, and political subordination. 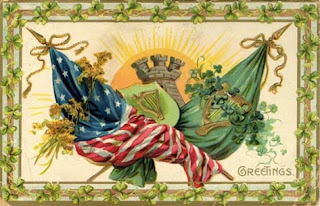 This circa 1910 postcard from the collections of the Museum's Curt Teich Postcard Archives is a terrific representation of Irish immigration to the United States and the bond between the two countries.

One of the great motivators for Irish coming to the Midwest was the Illinois-Michigan Canal. Built between 1836 and 1848, this 100-mile commercial waterway, linked Lake Michigan in Chicago to the Illinois River in Peru. The canal’s contractors relied heavily on recruiting Irish for the work force and advertised in newspapers in Dublin, Cork and Belfast. After working on the Canal and saving enough money, many Irish decided to settle in Illinois and bought land in Lake County. 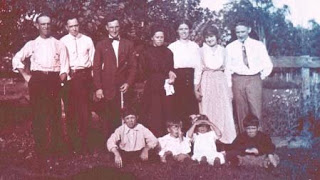 Evidence of Irish settlement was reflected in area place names. "Ireland" was located east of the Des Plaines River in Libertyville and Vernon Townships. "Irish Hills" referred to the area of rolling hills around Hunt Club Road and Route 173 where a high percentage of Irish farmers settled. "Codfish Town" was a designation used for the Irish neighborhood near Washington Road in Lake Forest where, in the late 1800s, the smell of codfish cooking on Friday evenings wafted in the air. (For more on Lake County's Irish Place Names check out my post.)

Shown in the photograph (above) is the Fuller family of Waukegan, welcoming their newly arrived Irish cousins in 1918. 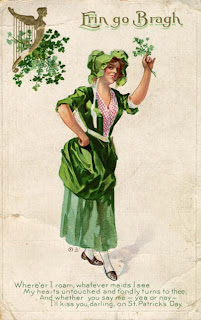 Postcards reflected both positive and negative images of the Irish. This circa 1910 postcard proclaiming "Erin go Bragh" or "Ireland Forever" is illustrative of the positive.

Though the Irish immigrants were materialistically poor, they brought a rich cultural heritage with them. Cultural events such as the St. Patrick’s Day parade, first celebrated in Boston in 1737, were regarded by many Americans as evidence of the separateness of these new immigrants. But the Irish desire for self-expression through parades and the “wearing of the green” in their adopted country helped them to retain their heritage while embracing the freedom at the heart of being American.

In the last several years, the Irish-American secular celebration of St. Patrick’s Day has made its way back to Ireland. The national holiday honoring Ireland's patron saint is now marked by a multi-day festival of parades, concerts and fireworks.
Posted by D_Dretske at 11:19 AM 1 comment:

The Era of Illegal Vices 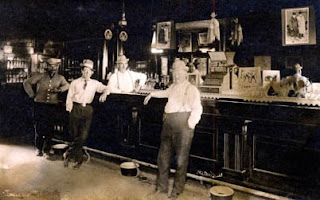 As early as the 1910s, the Chain O' Lakes region, particularly Fox Lake, were known for their drinking and gambling establishments.

Shown at right is a real photo postcard of the Ingleside Buffet, circa 1910. Mr. Coleman, the proprietor, is most likely the man standing behind the bar.

During Prohibition (1920-1933), the lakes region became a notorious hangout for Chicago mobsters, including Al Capone's and Bugs Moran's gangs. The Chicago Tribune reported it was “…worse than in the levee districts of the city.” 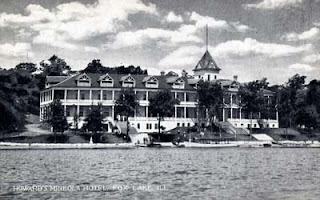 The situation in Fox Lake was in part due to Chicago’s efforts to “clean up” its vice districts, which caused those districts to re-settle in the suburbs. The Tribune article added, “Probably the most vicious resort is the Mineola Hotel. All of the hotels are supplied with slot machines.” The Mineola is shown in its heydey in this V.O. Hammon Company postcard, circa 1920.

The 100-room Mineola Hotel was built in 1894 by Chicago businessmen. It is the largest wooden structure in Illinois, and is on the National Register of Historic Places. It is still in use today as a restaurant and banquet facility. 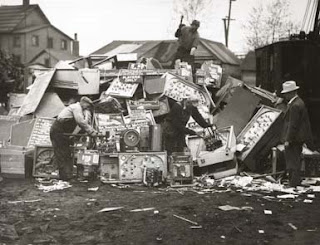 In the late 1930s, Lake County's board of supervisors appointed a Special Prosecutor to deal with the illegal gambling problem. Shown in this News-Sun photo from May 9, 1939, is Special Prosecutor, Charles E. Jack, (right) watching as workmen demolish 80 slot machines and pinball games in the yards of the Diamond Lake Junk Company. The News-Sun reported, "The machines were seized in a series of raids... to drive gambling out of Lake County. Jack filed his final report, announced the county clean, and ended his duties yesterday."
Posted by D_Dretske at 10:20 AM 4 comments: 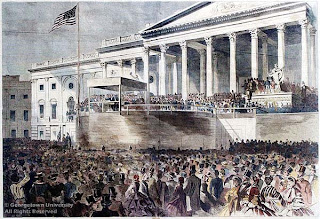 President Lincoln's first Inauguration was held on March 4, 1861 with the oath of office taking place on the steps of the capitol. Shown here is an artist's drawing made at the event from the collections of Georgetown University.

Lincoln's wife, Mary Todd Lincoln, felt it was important for the new First Family to put their best foot forward. She worried that Washington, D.C. society would look down their noses at the Illinoisians. Mrs. Lincoln's efforts which included wearing the most fashionable clothes and re-decorating the White House were highly criticized. 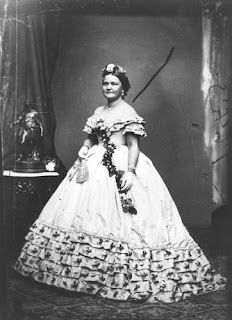 Mary wore an elegant gown to the Inaugural Ball, as shown here in a photograph by Matthew Brady and held in the collections of the Library of Congress. Brady was famous for his portraits of the most celebrated people of the day, and later for his Civil War battlefield photographs. 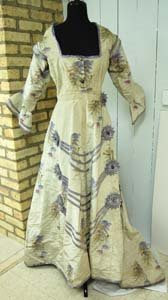 A dress worn at the first Inaugural Ball is in the collections of the Lake County Discovery Museum. The wearer's name is unknown, but she was related to a woman who lived in Waukegan. The gown is shown here without undergarments. Though the dress is in need of conservation, its former beauty is still evident in the details. Shown here is one of the lovely purple florettes that embellish the dress.

The donor, Adaline Roemer Banta, was the granddaughter of Union General Louis Blenker. The dress and the General's papers were donated to the Museum in 1961.
Posted by D_Dretske at 10:32 AM No comments: