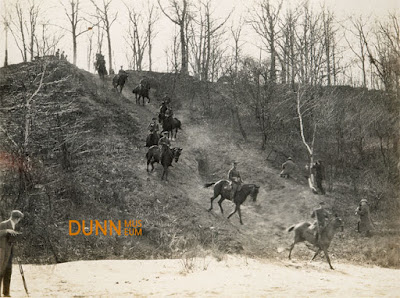 Cavalry descending a bluff to the beach at Fort Sheridan with photographers documenting their training. Circa 1925. Fort Sheridan Collection, Bess Bower Dunn Museum 92.24.2658
The most famous cavalry officer to be stationed at Fort Sheridan was George S. Patton Jr. (1885-1945). Though the cavalryman-turned-tanker had a relatively brief stay at the Fort from 1909 to 1911, he made an indelible impression on all who encountered him.
The U.S. Army post at Fort Sheridan (est. 1887) became known as a cavalry post with the arrival of the 7th Cavalry in 1892.
The Fort's unique terrain was a welcome challenge for cavalry training. Cavalrymen tested their own and their horses' skills by descending the bluffs to the sandy beach, and traversing acres of uneven ground.
After graduating from West Point in June 1909, a 24-year-old George S. Patton Jr. took a commission as a 2nd lieutenant with the 15th Cavalry and was stationed at Fort Sheridan near Highland Park in Lake County, Illinois. 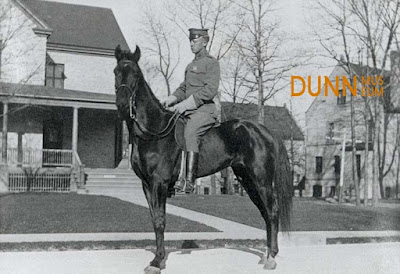 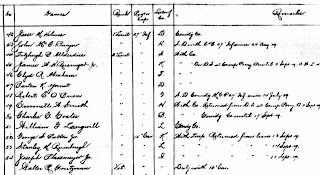 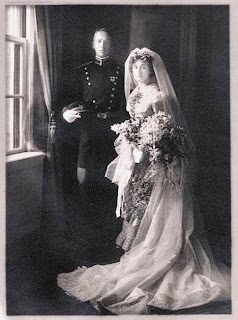 Wedding details as published by the Boston Globe on May 27, 1910. Newspapers.com

After a month-long honeymoon, the newlyweds made their home at Fort Sheridan. The Boston Globe, May 27, 1910. Newspapers.com.
As a married officer, Patton was assigned to new quarters in Building 92 on Leonard Wood Avenue East. On March 19, 1911, the couple welcomed their first child, Beatrice Ayer Patton, who was born at Fort Sheridan. 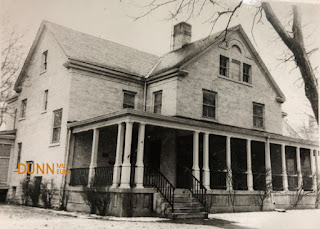 Building 92 on Leonard Wood Avenue East (north of Martin's Lane) where Cavalry officer, George S. Patton Jr., his wife Beatrice and baby daughter Beatrice lived on the north side of this duplex. Fort Sheridan Collection, Bess Bower Dunn Museum, 95.32.68.
A story relayed by the Ray Family of Diamond Lake (near Mundelein) is that Patton would come for Harriet Rouse Ray's famous chicken dinners on Sundays at the Ray's Lakeside Cottage. Patton arrived on horseback and in uniform, of course.
According to biographer, Ladislas Farago, Patton and his wife were known at the Fort as the "Duke and Duchess." Patton was independently wealthy, and the couple enjoyed dressing up for dinner, driving expensive automobiles, and were both equestrians. Chicago Tribune, October 25, 1964. 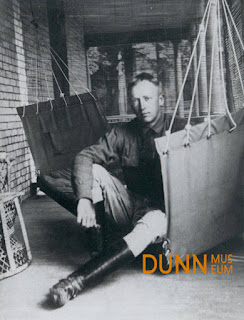 Lt. George S. Patton Jr. on the porch of his Army residence at Fort Sheridan (Building 92), circa 1910. Fort Sheridan Collection, Bess Bower Dunn Museum, 92.24.2020.
At Fort Sheridan, Patton impressed his superiors and was known as a hard-driving leader.
In late 1911, he was transferred to Fort Myer, Virginia, where he would come to know many of the Army's senior leaders. 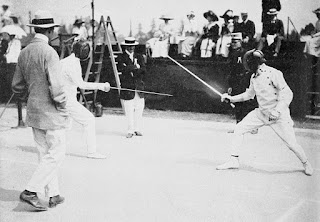 Patton (right) fencing in the 1912 Summer Olympics held in Stockholm, Sweden. He finished fifth overall in the modern pentathlon.  Swedish Press photo, public domain. Wikipedia.
In 1917, Patton joined General John J. Pershing's staff for the American Expeditionary Force (AEF) in World War I. While in France training American infantry troops, Patton became interested in tanks. His new military path quickly developed as he advocated for the development of a tank corps. When the 1st Tank Brigade was created, Patton was placed in charge. Along with British tankers, he and his men achieved victory at , during the world's first major tank battle in Nov-Dec, 1917.
During World War II, Patton was the Army's leading strategist in tank warfare. He commanded the Western Task Force in the Allied invasion of North Africa in November 1942, the Seventh Army during the invasion of  in July 1943, and was given command of the Third Army in  in 1944.
An imaginative, shrewd, and often undiplomatic military commander, Patton is remembered as one of the most brilliant and successful generals in  history. While his military genius in tank warfare was put to the test on Europe's battlefields, Fort Sheridan will always be Patton-the-cavalryman's first Army post.
- Diana Dretske ddretske@lcfpd.org
Posted by Diana Dretske at 1:21 PM 1 comment: