In October 1862, while the 96th Illinois was in northern Kentucky, they were approached by two Confederate deserters—James Kenty and John McGill.

Both men had enlisted from New Orleans with the 1st (Strawbridge's) Louisiana Infantry. James Kenty was an unwilling recruit, enlisting on April 29, 1861, and John McGill was conscripted, enlisting on May 23, 1861.

A large number of the men in the Louisiana Volunteer Infantry were foreign-born, particularly Irish from New Orleans' wharves and docks. John McGill (1833-1891) was a laborer and immigrant from Ireland, and James Kenty (ca. 1840-unknown) was a sailor and immigrant from England.

Desertion rates in the South were far lower than those of Union soldiers. Some have attributed this to the South fighting a defensive war, on their own ground, giving the soldiers a sense that they were fighting for their homeland. Another factor, early in the war, were the Union's great losses.

Private Kenty was wounded while fighting with the 1st Louisiana at Pittsburgh Landing in the Battle of Shiloh on April 6, 1862. 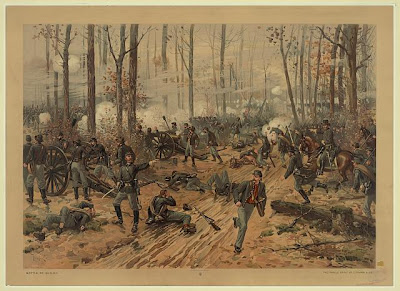 Battle of Shiloh, April 6, 1862.
Confederate forces under Gen. Johnston attacked a stunned Gen. Grant and his Union troops
along the Tennessee River at Pittsburg Landing. The battle was the bloodiest the war had yet seen.
Art by Thure de Thulstrup, ca. 1888 (Library of Congress)

How these men managed to survive until they approached the 96th Illinois is anyone's guess. They had come to Kentucky with General Bragg's Army. According to the 96th's history: "upon a favorable opportunity slipped from the ranks and made their way northward until they met this command when they offered to enlist and were accepted."

Both proved to be excellent soldiers. Kenty served most of the time in the Quartermaster's Department as the regimental/brigade butcher.

Kenty and McGill survived the war. Kenty's last known residence was in Stockton, Rooks County, Kansas in 1886. McGill settled near Walled Lake, Michigan with his wife Elizabeth A. Graham McGill. The 96th's history noted that in 1885, he was in poor health (probably from his war wounds). 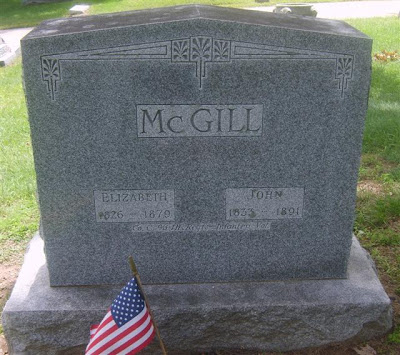 John McGill's tombstone in Walled Lake Cemetery, Michigan.
His service with the 96th Illinois is noted at the bottom of the stone.