In 1862, James Joice (1822 - 1872), an enslaved African American from Kentucky, became  the cook and valet for First Lieutenant Addison Partridge (1807 - 1888) of the 96th Illinois Regiment. Joice's service with the Union Army would lead him and his family to freedom in Lake County, Illinois. 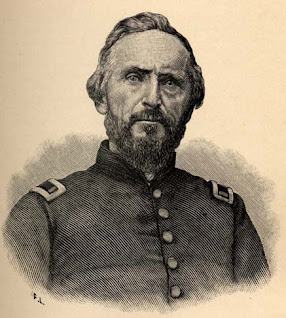 Addison Partridge of Ivanhoe from the "History of the Ninety-Sixth Regiment Illinois Volunteers" 1887.
During the Civil War, it was common for enslaved men to approach Union troops "desiring to accompany the command." However, it was tricky business for the troops to accept these men into their camps, since the Fugitive Slave Laws made it illegal.
The 96th Illinois's officers "nearly all were radically opposed to slavery, and the negro who sought refuge in the camp was protected, but in such a manner as not to involve any one in a legal way." They accomplished this in part by not allowing citizens into camp whenever it was suspected they were hunting for runaway slaves.
In late October 1862, in the area of Crittenden, Kentucky, James Joice approached the men of the 96th Illinois to be of service to their command. 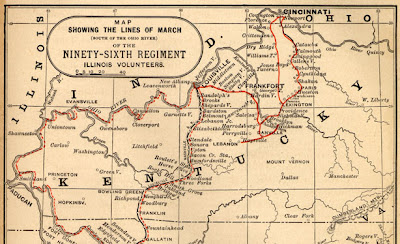 Crittenden, Kentucky, the area  believed to be where James Joice first encountered the 96th Illinois is located to the left and below Cincinnati Ohio at the top of the map. Map shows the lines of march of the 96th Illinois Regiment's through Kentucky. "History of the Ninety-Sixth Regiment Illinois Volunteers," 1887.
On November 2, Joice assisted Lieutenant Montgomery and a dozen soldiers of Company D on a foraging expedition as its "pilot" or guide. He directed them to a plantation, where Lt. Montgomery knocked on the door and spoke to a man explaining that they were a "detachment from the command encamped on Eagle Creek, and that, being short of rations, they had come for a few bushels of potatoes... if he was a loyal citizen a receipt would be given so that he could collect pay."
The man pretended there were no potatoes on the plantation, but Joice had assured the Lieutenant that there were potatoes in the fields. The Lieutenant kept the man occupied by making him repeat a long oath, while the soldiers went in search of the potatoes, which they found.
After this incident, Joice remained with the 96th Illinois "until Nashville was reached" as First Lieutenant Addison Partridge's cook and valet. Partridge was a known abolitionist, and his influence on Company C was "excellent as he helped in making both its moral and military standing high."
In February 1863, Partridge resigned his commission when he was unable to sufficiently recover after contracting “camp disease.” Joice accompanied Partridge to his home in Ivanhoe, Lake County, Illinois, (then known as Dean's Corners), where Partridge owned 80 acres.

James Joice's wife and daughter, Jenna and Sarah, pictured at a picnic in Ivanhoe, 1897. (BBDM 76.30)
Census records list Jenna and Sarah's occupations as "servant" and "housekeeper."
In 1897, the Lake County Independent noted that Miss Sarah Joice "is taking orders for carpet stretchers."
James Joice worked as a farm laborer, and over the years his family lived in rented homes along Route 176 near Lincoln School in Mundelein and further west near Ivanhoe. They eventually settled on a 10-acre farm on Route 60, one-quarter mile south of Hawley Street. 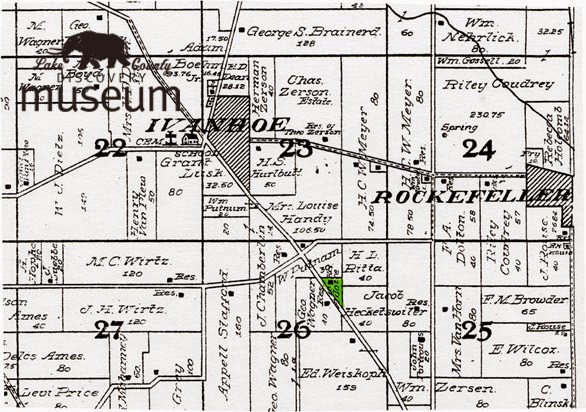 1907 Fremont Township plat map of the Asa Joice property highlighted in green.
Asa and Sarah attended Mechanics Grove School where they took piano and singing lessons. They were small children when they came to Lake County, and by all rights, this was the only home they knew. According to census records, the entire Joice family could read and write.
On Joice's death in 1872, the Waukegan Gazette ran a short column: "Death to Colored Citizen - On Tuesday last occurred the death of James Joyce of Fremont in this County. 'Darky Jim' as he was familiarly known was with the Ninety Sixth Ill. Regt. during a part of their term of service and has most of the time since the war lived in the vicinity of Diamond Lake. He leaves a wife in rather destitute circumstances."
The Joices were members of the Ivanhoe Congregational Church, and attended prayer meetings. Asa served as church clerk and Sunday school treasurer. 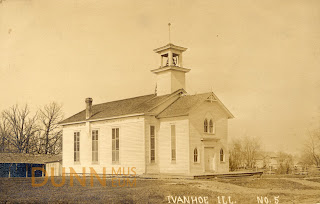 Ivanhoe Congregational Church, circa 1913. Prior to and during the Civil War, this congregation was outspoken against slavery. Image courtesy of private collector.
Jenna, Asa, and Sarah Joice were members of the Christian Endeavor Society, which was founded in 1881  in Maine. The CE became a national organization and took up many causes, including the temperance movement. In June 1897, Asa was elected as the local CE Society's president.

Christian Endeavor Society picnic on the grounds of the Ivanhoe Congregational Church, 1897. Asa Joice is seated in the middle to the right of center, and his mother and sister are standing to the far right. Dunn Museum 76.30
In addition to being a farm laborer, the civic-minded Asa became the first African-American elected to public office in Lake County. In 1889, he was elected as town constable and re-elected to the post for nine years. 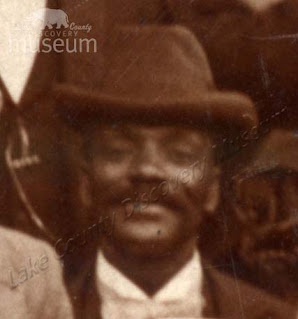 Asa Joice as photographed at a church picnic in 1897. Dunn Museum 76.30
On June 24, 1898, the Lake County Independent, reported that: "Constable Asa Joice of Ivanhoe arrested Charles Ray, a character who some years ago was employed in the Gilmer creamery..." In Lake Mills, Wisconsin, Ray had allegedly stolen a horse and a rig from a doctor and was traced to Diamond Lake (where the Ray clan lived).
Constable Joice took Ray before Justice Berghorn of Rockefeller (Mundelein) for a hearing, where Ray pleaded guilty. Joice then took him to the Waukegan jail "where he was lodged in default of bail to await the action of [the Grand Jury]." Shockingly, the next morning, Ray was found dead, supposedly of apoplexy. 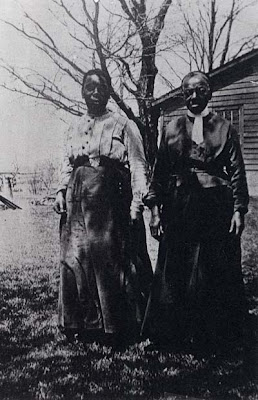 Sarah and Jenna Joice photographed on their farm in 1917. Photo courtesy of the Mundelein Heritage Museum.
In 1920, Jenna Scruggs Joice died after becoming ill while tending to influenza patients. She likely contracted the flu from her close proximity to the sick. The flu pandemic lasted from June 1918 to December 1920, striking mostly healthy young adults, and ultimately killing at least 3% of the world's population.
Asa Joice passed away in 1924 in Elgin, and Sarah Joice lived on her own near Ivanhoe until her death in 1941. 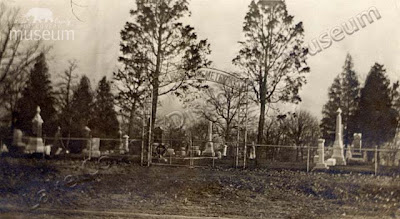