One of my recent posts was about the Rondout Train Robbery of 1924--the largest train robbery in U.S. history. The fact that $1 million was never recovered, out of the $3 million in cash, jewels and bonds that was stolen, has always intrigued me.

I've often wondered what would happen if someone found the loot which is believed to have been buried in glass mason jars somewhere in Lake County. Well, turns out that question may be answered in a somewhat similar case. An article published today by Matt Apuzzo and Alicia A. Caldwell of the Associated Press sheds some light.

So, for any of you treasure hunters hoping to find the Rondout bounty... beware. Unearthed, decaying money will be regarded suspicously, if not downright sinisterly by authorities when trying to cash it in. Hmm, would they be opposed to it being donated to a museum for its historical value?
Posted by D_Dretske at 3:25 PM No comments: 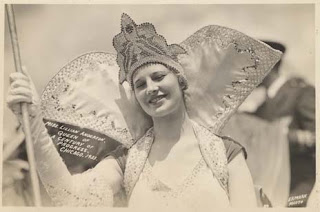 It's high summer and for a lot of communities that means the beginning of fair season. The Lake County Fair is going on this week, July 22-27, and is celebrating its 156th anniversary.

The county's fair was begun by local nurseryman, Robert Douglas, who held arbor and floral exhibits at the county courthouse in Waukegan during summers in the late 1840s. His project turned into the Lake County Agricultural Society which in turn became the Lake County Fair Association. The first county fair was held in Waukegan in 1852.

And what would a fair be without a fair queen? The first modern pageant was staged by P.T. Barnum in 1854. The first bathing beauty pageant took place as part of a summer festival to promote business in Rehoboth Beach, Delaware, in 1880 with inventor, Thomas Edison, as a judge, and the prize a bridal trousseau.

The Chicago World’s Fair of 1933-34, chose Miss Lillian Anderson (see photo) of Racine, Wisconsin, and later of Libertyville, to be the fair’s queen. Anderson paraded with her court of fifty attendants into the fair on opening day. The attendants wore white and cream dresses with broad-brimmed hats of red. The Chicago Daily News described the scene: “Queen Lillian herself occupied a red throne under a feathery red canopy and smiled prettily at the reviewing stand with a perfectly executed "eyes right."
Posted by D_Dretske at 9:49 AM No comments: 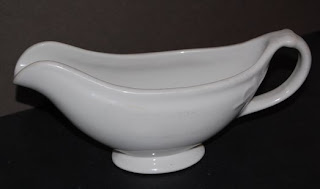 A gravy boat produced by Pickard China of Antioch was recently donated to the museum's permanent collections.

This particular food service item was made for the United States Quarter Master Corp (U.S.Q.M.C.) for the U.S. Navy in March 1942. The gravy boat contract kept the company afloat (so to speak), and also kept a lot of locals employed during the rough economic times of World War II.

The company's history relates that: "Austin Pickard successfully bid on a Navy contract for gravy boats. These heavy chunks of institutional ware were a far cry from the delicate, sculptured procelain with which the company had become identified... it was the fuel oil allotment [from the government] that fired the kilns and kept the company alive."

The company was established in Edgerton, Wisconsin in 1893 by Wilder Austin Pickard. In 1897, the company moved to Chicago where it was decorating company, specializing in hand painted art pieces, dessert and tea sets. In 1937, production moved to Antioch. Since 1977, Pickard has manufactured the official china service for U.S. embassies around the world. The U.S. Department of State selected the company for this honor, and also to create the china for Air Force One and Camp David.

Pickard is one of the oldest continuous manufacturers in Lake County, and is still in operation in Antioch.
Posted by D_Dretske at 2:48 PM No comments: 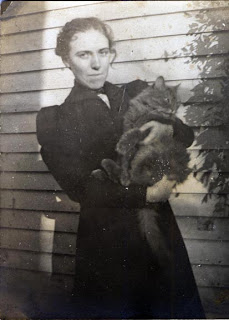 In this weekend's paper, there was an article by Steve Dale titled, "The Truth About Cats." It explored that there are 10 million more cats in American homes than dogs, (82 million to 72 million), but they're not taken care of nearly as well as dogs.

The article went on to say that "Just 2% to 5% of lost cats at shelters are ever reclaimed" by their owners. This is a very sad state of affairs. Certainly there are many Americans who adore their cats, but why do some folks have pets if they don't care if they're lost?

What happened to the good ole days of Ernest Hemingway and his six-toed feline friends? Hemingway (1899 - 1961), the famous American novelist, was given a six-toed cat by a ship's captain and some of the original cat's descendants survive to this day among the aproximately 60 cats protected at the Ernest Hemingway Home and Museum in Key West, Florida.

Searching for cats that were well-loved in historic Lake County, Illinois, I came across the attached photo of Bess Dunn (1877-1959), and her cat, taken circa 1900. Bess was a Waukegan resident and county historian, and the first woman in motion pictures. There are several photos in the Bess Dunn Collection in which this particular large gray cat is being cuddled.
Posted by D_Dretske at 3:57 PM No comments:

Labels: Bess Bower Dunn, cats, Ernest Hemingway
Newer Posts Older Posts Home
Subscribe to: Posts (Atom)
Use of material on this blog must be properly credited and may not be published without written consent. Contact Diana Dretske ddretske@lcfpd.org Thank you!
Current and future subscribers to the Lake County History Blog will receive new post notices from follow.it. New subscribers, please submit your email above.