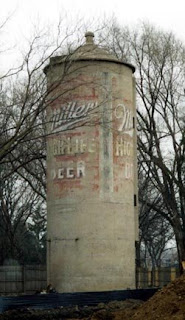 What structure on the American landscape best represents the nation's heritage? I would argue that it's the barn. Sure these days farming is a mysterious profession for most of us, but there was a time, and not so long ago that 80% of Americans labored on farms.

When you think of barns you also should think of silos. The towering, vertical silos we know today, especially here in the Midwest, are a truly American innovation, and go hand-in-hand with barns.

Influenced by grain storage pits of the "old world" and corn cellars of Native Americans, the first known upright wooden silo was constructed in 1873 by Fred Hatch of McHenry County, Illinois. However, Wisconsin bears the honor of having more silos than any other state.

The prime reason for Wisconsin’s numerous silos is its dairy industry. Until the 1870s, winter or year-round dairying was rarely an option, because it was difficult to provide sufficient succulent food for cows to maintain milk production. But by storing silage (green fodder) in an air-tight container (silo), it stopped fermentation, preserving the feed until it was needed, creating a boom in dairying.

The use of silos spread by word of mouth and through farming magazines. By 1924 there were more than 100,000. During World War I farmers were asked to raise more food for the war effort. Building a silo was equated with patriotism while building a large barn was a symbol of a farmer's prosperity.

Silos have been built of wood, fieldstone, tile, brick, concrete and steel, and have ranged in height from 35 to 60 feet. Beginning in the 1930s, barns and silos along state roads were sometimes used to advertise products, similar to today’s billboards. The attached photo of a silo (razed in 2003) was along “old” Route 41 (Greenbay Road) in Waukegan. Even with its paint faded with time, you can still see the advertisement for Miller High Life Beer.

A couple of notable silos that have been preserved in the county: Two concrete stave silos at Bonner Heritage Farm in Lindenhurst constructed by a commercial company in 1932 and 1950; and a masonry block silo (circa 1925) on the south side of Route 60, east of Butterfield Road in Vernon Hills--a remnant of a dairy farm and of the village's distant agricultural past.

The 2002 Census of Agriculture in Lake County shows that 337 active farms with 38,860acres of farmland remain in the county.
Posted by D_Dretske at 12:48 PM No comments: 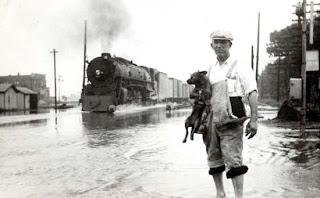 With all the flooding in the Midwest in recent weeks, I recalled this photo of a flood in Rondout, circa 1938.

It's a striking image with the steam engine barreling through the floodwaters and an unidentified man in coveralls holding his dog.

The tiny, unincorporated Rondout is located between Knollwood and Libertyville along Route 176. It grew around the railroad lines that passed through it and was originally an agricultural area known as Sulphur Glen. It was supposedly renamed Rondout when a business from Rondout, New York considered moving there.

The site is famous for the largest train robbery in U.S. history which occurred there on the night of June 12, 1924. Chicago gangsters, including the Newton Boys out of Texas, stopped a U.S. postal train on the Chicago, Milwaukee and St. Paul Railroad and stole an estimated $3 million in cash, bonds and jewelry. The crime was master-minded from the inside by U.S. postal inspector, William Fahy.

Gang members (minus Fahy) boarded the train wearing gas masks and carrying revolvers at the Buckley Road crossing near Rondout. During the hold-up one of the gang, J.H. Wayne, was shot by another gang member when he was mistaken for part of the train crew. The injured man was seen in Chicago and reported to authorities.

Headlines for June 15 from the Chicago Tribune read “Dying Man Gives Clew [sic] to Mail Robbers and Loot.” Within a few days most of the gang were arrested, and by August, Fahy was arrested, too. All were found guilty and sentenced from three to twenty-five years in prison.

To this day, more than $1 million has never been recovered.
Posted by D_Dretske at 2:25 PM 1 comment:


A researcher called the Archives looking for information on the defunct Chicagoland Airport once located in the Half Day/Lincolnshire area. After checking the newsclipping files and finding only a couple of references, I remembered a website I had stumbled across doing research on the Haley Army Airfield at Fort Sheridan.

The website Abandoned and Little Known Airfields is a fantastic source for vanished airports throughout the country. And indeed, the site had a good deal of information, maps and aerial photos about the former Chicagoland airport which began its life as a U.S. Navy flight training airfield about 1945.

In recent months, the museum has received several requests by the public for photographs of George S. Patton, Jr. (1885-1945). This decorated war hero was stationed at the U.S. Army post at Fort Sheridan (near Highwood, Illinois) from 1909-1911. 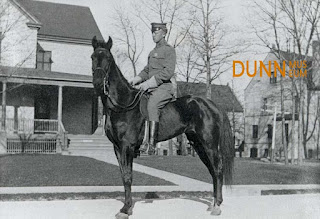 George S. Patton Jr. at Fort Sheridan, circa 1911. Fort Sheridan Collection, Dunn Museum 92.24.1966.
After graduating from West Point, Patton took a commission as a 2nd lieutenant with the 15th Cavalry and was stationed at Fort Sheridan. A year later, in 1910, he married Beatrice Banning Ayer (1886-1953), and moved into Building 92—a two-family (duplex) lieutenants quarters built in 1905. The attached photo shows Patton on horseback on Leonard Wood Avenue, possibly in front of Building 92 where he lived, circa 1910.

In World War I, Patton made the transition from cavalry to tanks, serving with the U.S. Tank Corps. He was an outspoken advocate of the tank as a modern combat weapon, and during World War II became the U.S. Army’s leading strategist in tank warfare.

Checking the museum’s database for all related Patton photographs, I noticed there were photos for a “Patton Road” at Fort Sheridan. This was incorrect—either a typo or the cataloguer was not aware of the error—as there is no Patton Road with an “o” at the Fort, but rather a Patten Road with an “e.”

The confusion over the name has come up when I’ve given tours of the Fort. Visitors notice that the road just south of Patton’s former residence (Building 92) is Patten Road, but don’t recognize the slight spelling difference and believe it’s named for the famous cavalry officer. However, Patten Road is named for Amanda Buchanan Patten (Mrs. James A. Patten), a resident of Evanston, Illinois. In 1929, Mrs. Patten donated the funds to build the south gate of the post as well as an athletic field. The South Gate at Fort Sheridan is known as “Patten Gate” for this reason, and not for George S. Patton, Jr.
You may also enjoy my post From Cavalry to Tanks.
For more on the history of Fort Sheridan and the Fort Sheridan Forest Preserve: Fort Sheridan military lesson plans and photo cards.

Labels: Cavalry, Fort Sheridan, Patton
Newer Posts Home
Subscribe to: Posts (Atom)
Use of material on this blog must be properly credited and may not be published without written consent. Contact Diana Dretske ddretske@lcfpd.org Thank you!
Current and future subscribers to the Lake County History Blog will receive new post notices from follow.it. New subscribers, please submit your email above.