A Bright and Prosperous New Year! 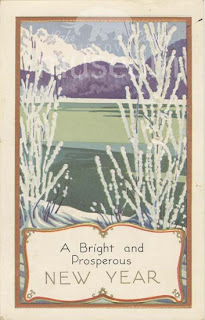 Several years ago, I decided to get smarter about handling the rush of the holiday season, and started sending New Year's cards. By New Year's Day, the frenzy of shopping, wrapping, decorating and merrymaking is over and done with, and I can write a nice note to family and friends wishing them the best for the coming year.

What seemed like a novel idea to me, and the people who got my "post holiday" cards, is actually an old tradition. At the turn of the 20th century, sending New Year's greetings in the form of a postcard or greeting card was quite popular. New Year's postcard, circa 1915 (left).


Many of the traditions and superstitions of ringing in the New Year are pictured on postcards. 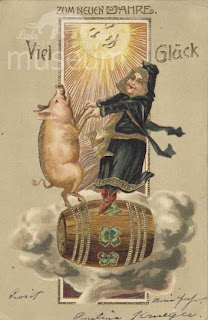 This German postcard from 1905 was sent from Chicago, and portrays a pig and monk dancing on a keg of beer. The pig (especially in Austrian tradition) foretells a year filled with fortune and good luck, as do the clovers. The keg of beer and dancing represent the festivities surrounding the New Year. Postcard from the Dorothy Gleiser Collection, 1905 (73.9.99). 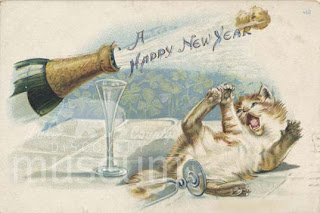 This American New Year's greeting is one of my favorite New Year's cards in the collection—mainly because of the cat, but also because it's such a dynamic greeting for the New Year. Of course, the bottle of bubbly represents celebration, but the loud pop of the cork has the added benefit of scaring away evil spirits. Postcard from the Dorothy Gleiser Collection, 1906 (73.9.99).

Noise making stems from Old World tales that evil spirits hover near as the New Year approaches. The noise of blowing whistles and horns, ringing bells, and popping champagne corks, all ward off impending danger. 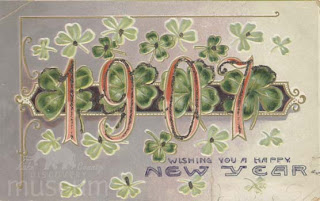 This design of the "year" festooned with four-leaf clovers was easily understood by the recipient as a wish for good luck throughout the coming year. Year date postcards were particularly popular between 1908-1912. Postcard from the Dorothy Gleiser Collection, 1907 (73.9.99). 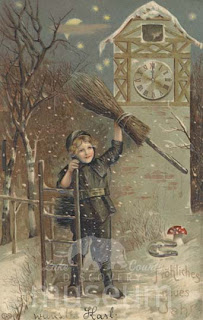 There is a lot of symbolism in this 1908 Swiss New Year's postcard. It was sent from a relation in Frauenfeld, Switzerland to Lizzie Schlager in Waukegan, Illinois.

The child with the broom and ladder is a chimney sweep and represents sweeping away the pains and tribulations of the past year and beginning with a clean slate. Also pictured is a red and white mushroom and horse shoe, both symbols of good fortune. And of course, the clock's hands are on twelve, striking midnight to ring in the New Year. Lizzie Schlager Collection, 1908 (61.8.300). 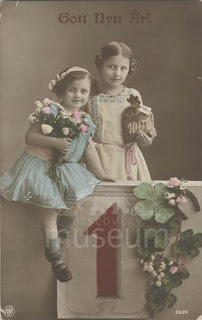 This stunning colorized photo postcard is from Lundsbrunn, Sweden. The children represent renewal, much like babies (versus an "Old Man" the symbol of the past year). The four-leaf clovers, horse shoe and bag of money are all representations of good fortune and plenty, while the number "1" is for January 1st and a new beginning. Postcard 1915 (LCHA). 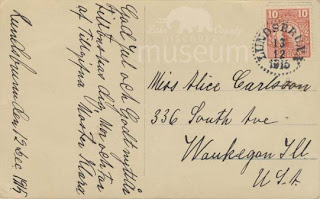 This is the back of the Swedish postcard, showing that it is addressed to Miss Alice Carlsson of Waukegan.

Any combination of the symbols seen above were employed to make an appealing New Year's wish. Additionally, you might see a stork carrying a baby (rebirth), a couple kissing (good luck to celebrate the first few minutes of the New Year with the one you love), shooting stars (induces prosperity), and elves with red hats ("Tomtens" for good fortune and popular with the Pennsylvania Dutch).

The museum's archival collections hold approximately 160 postcards related to the New Year.
Posted by D_Dretske at 11:15 AM No comments:

Images of Christmas Past

In December 1865, Susannah Smith of Millburn wrote in her diary:

22nd - Will have no school till Tuesday because Monday will be “Merry Christmas.”

25th - Cousin William, and family came to spend Merry Christmas with us and we had a merry, merry time. They stayed all night.

As a young unmarried woman, Susannah taught at a one-room schoolhouse, Grubb School, located at Grass Lake and Beck Roads one half mile east of Deep Lake Road (now part of Lake Villa). Her diary gives many insights into rural life, including a glimpse into holiday festivities, and the fact that school was back in session the day after Christmas. 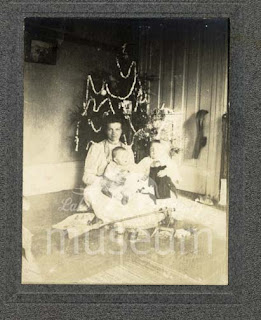 In this 1908 photograph, Mildred Holloway Minto of Millburn sits with her daughters, Ruth (on lap) and Katherine in front of the family's Christmas tree. Mildred married David Harold Minto in 1905, who was the son of Civil War veteran David J. Minto and Susannah Smith.

Susannah Smith Minto continued to keep a diary for many years. In 1910, she commented on activities surrounding the coming holiday:


December 10th - I rec’d a nice box of writing papers & cards as a Christmas gift from Mrs J.M. Strong of 60 So. ave Pasadena Cal.

December 22nd - Men got Christmas trees from our woods. [The Minto property  was on Deep Lake Road north of Grass Lake Road, adjacent to Loon Lake.] 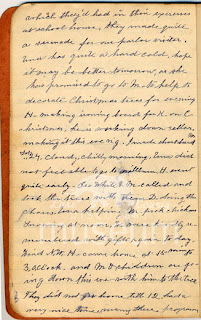 The diary page shown above is for December 23 and 24, 1910. Transcribed here is an excerpt:

Una [Susannah's daughter] has quite a hard cold, hope it may be better tomorrow as she has promised to go to M. [Millburn] to help to decorate Christmas trees for evening. H [Susannah's son, David Harold Minto] making ironing board for K. [his daughter Katherine] on Christmas; he is working down in cellar making it this evening. I made shortbread.

Susannah's granddaughters, Katherine Minto and Lura Minto Johaningsmeier donated the photo above among other photos, family letters and diaries to the museum in 1993. The donation, known as the Minto Collection, has become one of the museum's most invaluable resources to staff and researchers.

On Christmas day 1911, the Wilton Family gathered in Avon Township for this family portrait: 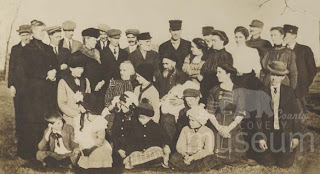 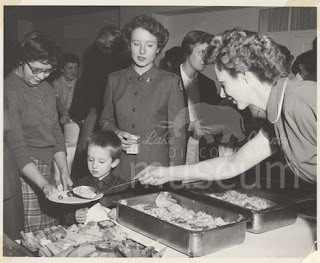 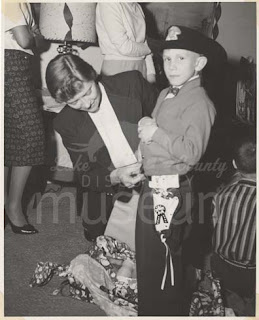 There's something about this young man that reminds me of my brother at that age. The cowboy look became immensely popular with the advent of television Westerns in the 1950s and 1960s, so this unidentified youngster was certainly having a very good Christmas.
Happy holidays!


In 2007, a collection of photographs and documents from the Kenar-Jakubowski Family of North Chicago was donated to the museum.

For the museum, the donation enhances its holdings for the North Chicago area, and the period of the 1920s - 1940s. It also increases our understanding of immigration to the county. Much of the county's history is related to settlement and growth, and this donation is the story of first generation Americans.

The patriarch of the family, Jacob Kenar (1878-1944), was a Polish immigrant and naturalized U.S. citizen. He arrived in the United States in 1900 and settled in North Chicago with his wife, Anna. Jacob became a leader among Polish people in the community, was a member of the Polish National Alliance Society and Holy Rosary Church, and worked for 25 years at the Chicago Hardware Foundry Company.

The bulk of the donation relates to Jacob and Anna's eldest child, Julia, and her husband Joseph Jakubowski.

The collection gives insight into life in North Chicago in the first half of the 20th century, and into the lives of immigrant families and their children. These were ordinary people living out ordinary lives, and in part that's what  makes the materials all the more fascinating. It's a slice of life.


The images shared here are a sampling of what the Kenar-Jakubowski Collection has to offer historians and genealogists. The collection consists of one-linear foot of material. 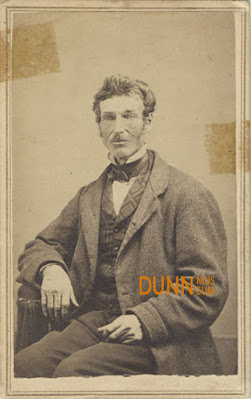 Jesse Maynard (1809-1890). Bess Bower Dunn Museum, 94.34.291.
Maynard built a log cabin for his family and farmed land along Grand Avenue east of Green Bay Road in Waukegan. Green Bay Road was a main thoroughfare for travelers and new settlers. Maynard's wife, Augusta, taught the first school at Spaulding's Corner located at the intersection of Grand and Green Bay Roads. The location was named for the David Spaulding family who had settled there in 1836. 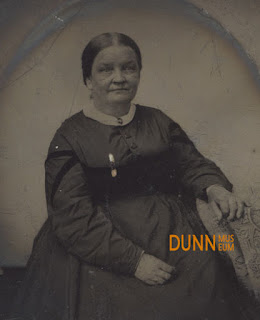 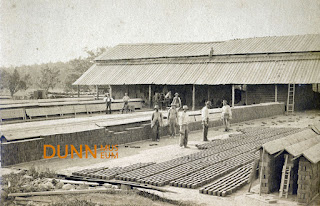 Maynard Brickyard on Grand Avenue in Waukegan. Bess Bower Dunn Museum.
Locally made brick was in great demand. Using the surface clay on site, Maynard made bricks which were first sun-dried, then stacked and covered for curing, and later baked in kilns located under a roof. A windmill on site provided power to pump water for the manufacturing process.
In the 1880s, the family covered their log cabin with siding, added rooms and plastered the interior walls (below). 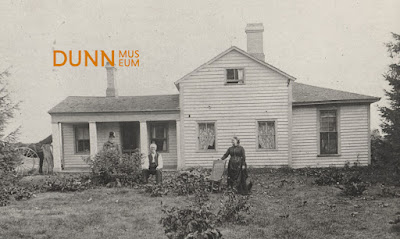 Maynard Family home, circa 1885. The original log cabin (two-story section above) was covered with clapboard siding and additions made as the family grew more prosperous. Left to right: housekeeper Tilda Sweet (behind shrub), Jesse Maynard seated; and daughter, Augusta Phillips (1839-1889) standing at right. Bess Bower Dunn Museum, 94.34.490
The Maynard family discontinued living in this house in the early 1900s, and rented it to tenants. In 1962, Jesse Maynard's great-grandson, Edward N. Maynard, inherited the 12.5 acre-property and house, and then sold it to the North Shore Gas Company.
The family had retained the knowledge that the clapboard covered house concealed the log cabin their ancestor had built of hand-hewn logs in 1844. In order to save the original log cabin, North Shore Gas donated it to the Lake County History Museum (Wadsworth, Illinois). 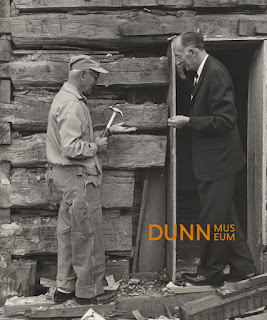 Russell Rouse (left) and Oscar F. Rogers, vice-president of North Shore Gas company, examining the hand-forged nails used by Jesse Maynard to build the house in 1844.
In 1964, the central two-story portion of the historic Maynard home was moved to the Lake County Highway Department yard on Winchester Road in Libertyville. That location was chosen since the Lake County History Museum was hoping to build a new museum in Libertyville near the Winchester House. 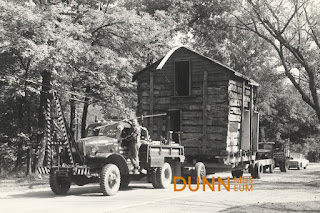 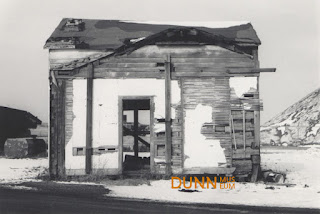 Maynard log house at Lake County Highway Department, Libertyville, 1972. Bess Bower Dunn Museum, 94.34.526.
Despite the best of intentions, the Maynard log cabin lingered outside and exposed to the elements until the mid-1970s while plans were developed for a new museum site. The cabin was carefully dismantled, each section numbered, and transported to Lakewood Forest Preserve about 1975. The goal was to reassemble the cabin, but by then the damage was done. Much of the timbers had been eaten away by powder-post beetles.
Sadly, all that remains of this worthy preservation project are the photographs taken to document its journey and the work of many volunteers, including the Carpenters & Joiners of America Local No. 1996, and George Palaske House Raising and Moving Company as they uncovered and moved the cabin from its original site.
Posted by D_Dretske at 4:33 PM No comments: