The Dog Days of Summer


To celebrate summer, I looked through the archives for evidence of how our predecessors dealt with the heat before there were water parks and air conditioning. These images should cool you off even if it is 90 degrees and 80 percent humidity outside. 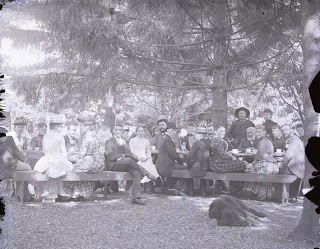 This picnic scene from about 1895 is unidentified, though it may be attributed to the Lux family of Wadsworth. 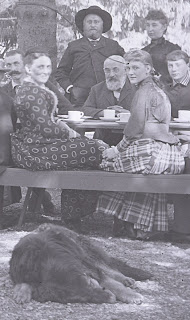 This detail of the picnic photo shows a large dog napping in the shade in the foreground, and the pleasant group of picnickers, enjoying tea or coffee in ceramic cups and saucers. 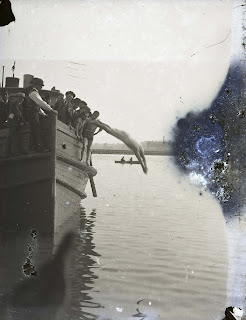 Perhaps a dip in the lake is more your style. How about this diver caught on film, circa 1895, a split second before hitting the water. Today, it costs on average $90 for a season pass to a water park. I'll bet it didn't cost this lad a penny to cool off. 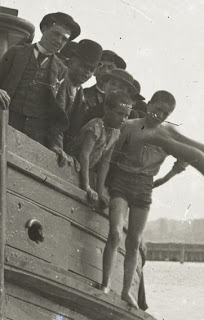 And a detail of the boys who stayed on the boat, watching the dramatic plunge and waiting for their turn. 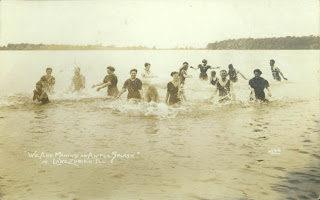 This real photo postcard from circa 1910 is captioned: "'We Are Having an Awful Splash' at Lake Zurich, Ill." 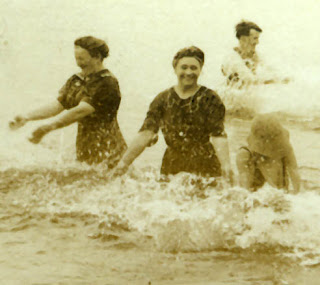 The close-up of the bathers, in there wool swimsuits, is proof of the great fun they had "posing" for this Masure and Leonhard postcard.


Take a lesson from the past to keep cool during these Dog Days, and find a shady spot under a tree or dip your toes in a local lake!
Posted by D_Dretske at 10:26 AM No comments: 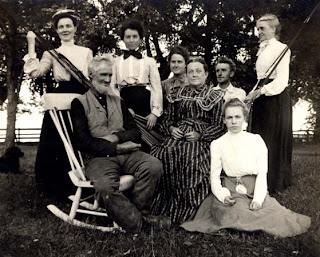 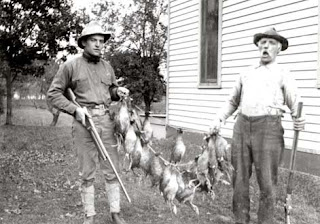 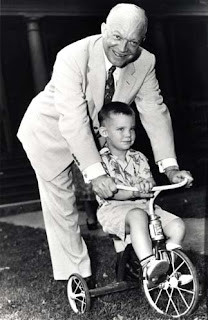 In 1966, Father's Day finally got the respect it deserves when President Lyndon Johnson issued a proclamation making it a federal holiday.
Posted by D_Dretske at 2:34 PM No comments:

The Circus Comes to Town


Last fall, I was walking through one of the objects storage areas with the museum's exhibits manager. He glimpsed a large folded canvas and asked about it, so we donned white cotton gloves and opened it to reveal an incredible sideshow banner of a snake. 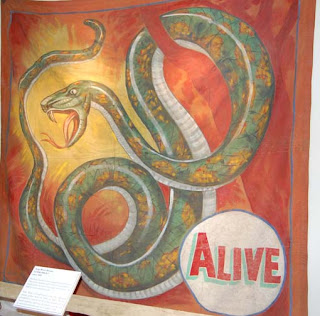 The 9' x 9' banner was so spectacular that it was decided on the spot that it had to be exhibited. So, the planning began to create an exhibit around it. It is shown here on display in the museum's Step Right Up! exhibit open through August 2, 2009. 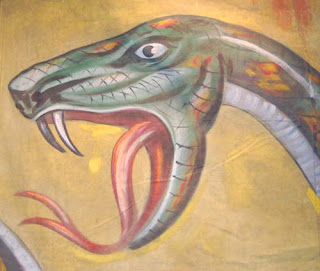 The "Alive" banner was painted and signed by Snap Wyatt, a Florida-based artist, who was a popular banner painter from the 1940s to 1960s. These banners were designed to be larger-than-life in color and subject to draw customers down the Midway to the sideshow tents.

The banner has been in the museum's collections for many years, but no records indicate how it came into the collection or where it was used. Despite this, we know that circuses traveled through Lake County towns giving performances, and some overwintered in factory buildings in Grayslake. 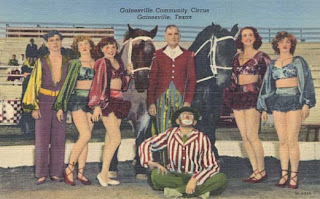 Included in the exhibit are about 100 postcards from the Curt Teich Postcard Archives of circus acts, winter quarters, and clowns. This 1953 picture postcard features performers with the Gainesville Community Circus of Gainesville, Texas.

In 1929 the citizens of Gainesville put together a circus to raise money for the bankrupt local theatre. Entirely staffed by local residents wearing homemade costumes, the circus was so successful that it continued until 1958.

The collections were further searched for circus related photos and objects. A bandmaster's jacket and baton were selected to display as well as photos of circus parades in Waukegan. 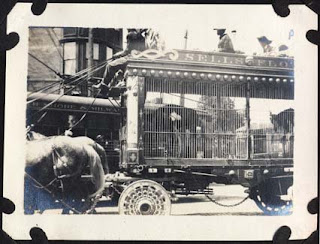 Shown here is a photo of the Sells Floto Circus parade on Genesee Street in Waukegan, August 23, 1920.
In 1906, this circus was created in Colorado as a combination of the Floto Dog & Pony Show and the Sells Brothers Circus. The Sells Floto Circus generally operated with sideshow acts. The circus was purchased by the American Circus Corporation in 1921, and then by Ringling Brothers in 1929. When Ringling bought the American Circus Corporation for $1.7-million, they owned virtually every traveling circus in America.

Sells Floto, like many circuses of the day, was impacted by the Great Depression, and closed in 1930.
Posted by D_Dretske at 2:02 PM No comments:

"The Man from Libertyville"


The Adlai Stevenson II historic home in Mettawa has been in the public eye recently with the completion of its renovation. The Lake County Forest Preserves' spent several years planning and renovating the home with State funding. This summer, public tours are available and indoor exhibits will be opening.

Thanks to all the press, the museum has benefited with donations of Stevenson memorabilia and books.

Stevenson was one of the 20th century's most important statesmen. He was Governor of Illinois from 1949 to 1953, ran twice for President as the Democratic National Candidate in 1952 and 1956, and served as Ambassador to the United Nations during the Kennedy administration from 1961 to 1965. 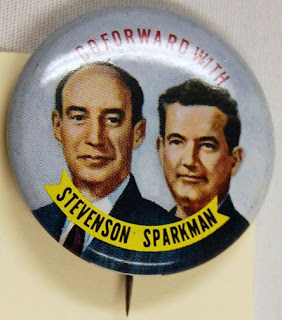 Among the Stevenson II memorabilia is this color campaign pin for Adlai Stevenson II and John Sparkman. Alabama Senator John Sparkman was chosen as Stevenson's presidential running mate in 1952. The slogan: "Go Forward with Stevenson Sparkman," was very appropriate for the future thinking Stevenson. 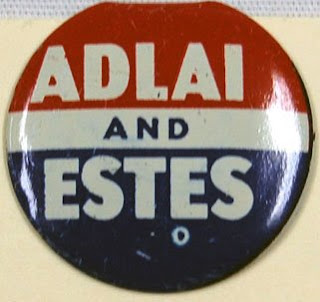 "Adlai and Estes" color campaign pin, 1956. This was Stevenson's second bid for the presidency. Carey Estes Kefauver ran as his vice-president, and was a Senator from Tennessee. 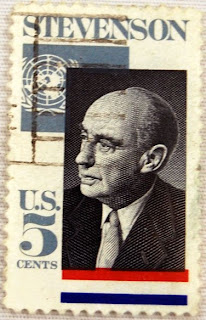 In 1965, after Stevenson's untimely death in London while U.S. Ambassador to the United Nations, the U.S. Postal Service issued this commemorative stamp.

Labels: Adlai Stevenson II, governor, Libertyville, Mettawa, U.S. Ambassador
Newer Posts Older Posts Home
Subscribe to: Posts (Atom)
Use of material on this blog must be properly credited and may not be published without written consent. Contact Diana Dretske ddretske@lcfpd.org Thank you!
Current and future subscribers to the Lake County History Blog will receive new post notices from follow.it. New subscribers, please submit your email above.