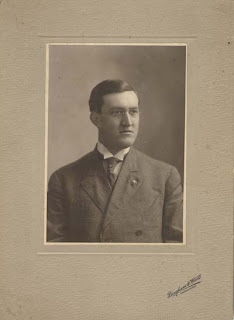 In 1891, a group of Waukegan businessmen formed the Waukegan Bachelors' Club—a men's club for social and "improvement" reasons.


The founding members purchased property on the east side of Third Lake and built a clubhouse with eight bedrooms, a large gathering room with a piano, and a large kitchen. 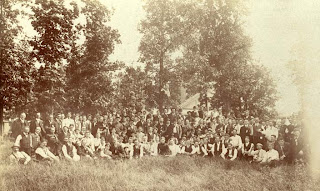 "Opening Day" was usually held on a Sunday in June. According to an invitation sent by Lew Hendee and other members, the event began at 4 a.m. and continued until it was "time to go to work the following day."

The bachelors decided the fate of one of their own at that first meeting each year. According to Dr. Pearce, "a candidate was selected by ballot to make a proposal for marriage that year. Some took the verdict good naturedly, others became terror stricken, but before the year had elapsed they have, thus far, persuaded some trusting damsel to share their fortunes." 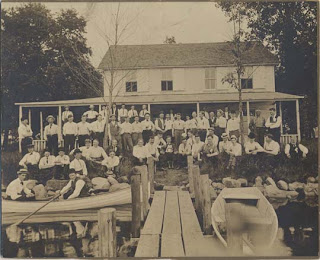 A view of the clubhouse and members, circa 1908.

Even after the men married, they remained dues-paying members to help with the property taxes on the clubhouse. The club also held a Family Day when bachelors could bring their girlfriends, and the married men could bring their wives and children for a picnic.

The bachelors hosted exclusive parties, but also spent a good deal of time outdoors fishing, boating, hunting, and even had a baseball team. 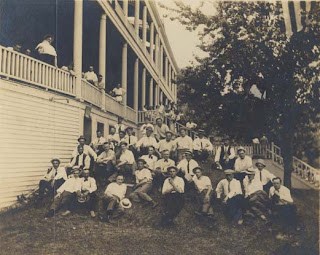 The bachelors on an outing to the Mineola Hotel, Fox Lake, circa 1907.

As time went on, more of the men married and interest in the club declined. By the 1920s, there were only a handful of members, and they purchased the land and subdivided it.


The museum has a significant Native American collection, most of which was collected or donated in the mid 1950s to mid 1960s. 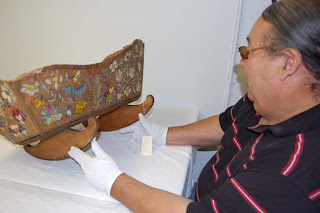 One of the most beautiful and intriguing objects is a birchbark cradle, made about 1870. (BBDM 94.0.7)

In September, Curley Youpee of the Fort Peck Tribes of Montana made a consultation visit to the museum and examined the cradle. 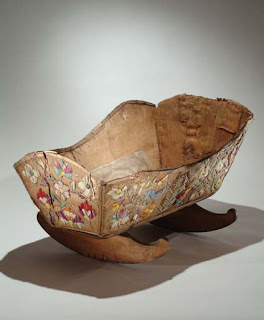 Mr. Youpee noted the mix of Native American and European imagery on the cradle, created with hand-dyed porcupine quills on birchbark, and in the form of a traditional European rocking cradle. He felt the European rooster and chicken design, and Native American floral design represented the blending of the two cultures. 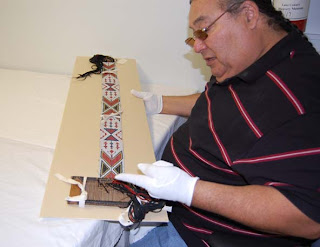 Another object carefully examined by Mr. Youpee was a sash.

The museum's files indicate the sash, still on its original loom, and shown here on its conservation mount, was collected at Bad River Reservation, WI in 1915. (BBDM 70.17.46)

The sash had been culturally identified as Chippewa, but Mr. Youpee advised that the leaf shooter design should be classified as Yankton Sioux. 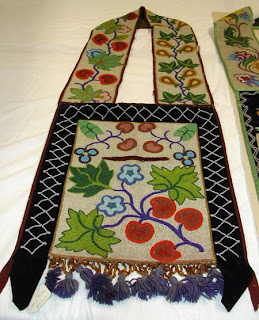 Culturally identifying Native American objects can be difficult and often sources are contradictory.

This bandolier bag has been identified as Chippewa (Ojibwe) from about 1890, but due to the vivid red color used on the floral design, it has been speculated that the bag was made by Potawatomi.
(BBDM 70.16.23)


The bags, worn in pairs one over each shoulder, were adapted from the European style of ammunition belts, such as those worn by British Red Coats. Over time, these pouches evolved into purely decorative costume with the bags sewn shut.

Today, bandolier bags are worn as a symbol of prestige at pow-wows, or given as gifts.
Posted by D_Dretske at 2:29 PM No comments: 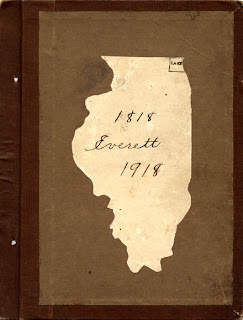 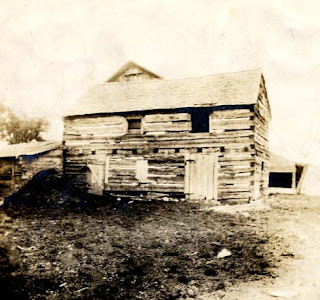 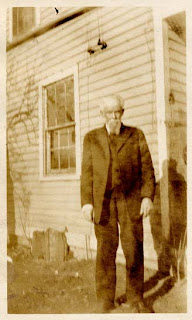 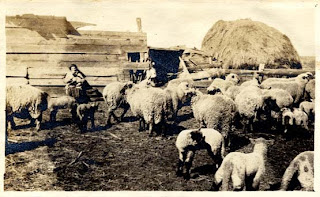 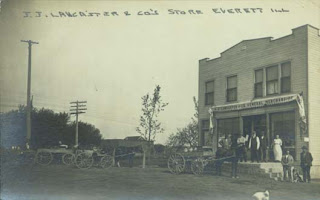 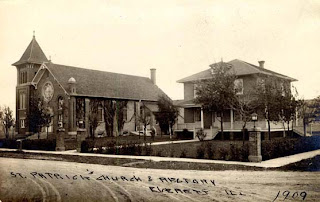 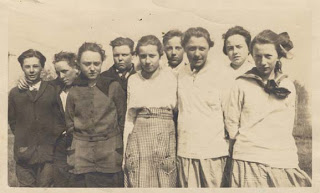 This school history is available for research at the archives. Grant funding to have this history and several dozen more from other schools transcribed, digitized and made available online is being sought by the museum.
Posted by D_Dretske at 1:59 PM 5 comments:

Food in the Atomic Age


The postwar era of the 1950s, changed the way America cooked and ate. Television allowed companies to mass-market their products to consumers, and the automobile culture boomed with the freedom to enjoy food on the go.

The phrase "Atomic Age" was coined by New York Times journalist, William Laurence, who was the official journalist for the U.S. Manhattan Project which developed the first nuclear weapons, and tested them in 1945. 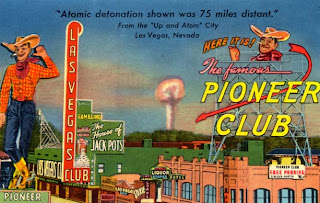 During the 1950s, Las Vegas became a tourist destination known for its casinos and the atomic mushroom clouds seen on the distant horizon, as shown in this 1952 Teich postcard (2CP2072).

The Nevada Test Site, a U.S. Department of Energy reservation located 65 miles northwest of Vegas, was established in 1951 to test nuclear devices. The blasts spurred the growth of the city through tourism and could easily be seen from downtown Vegas hotels. 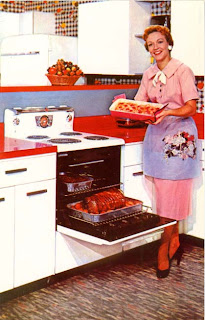 After the lean years of rationing during World War II (1941-1945), Americans were ready to enjoy life to the fullest again. The new prosperity allowed families to renovate kitchens and buy new appliances for the first time.

The look was cleaner and less fussy than the kitchens of the 1930s, and relied heavily on electricity, which was an efficient power source for the plethora of new gadgets available to housewives. 5CK493 Teich postcard, 1955. 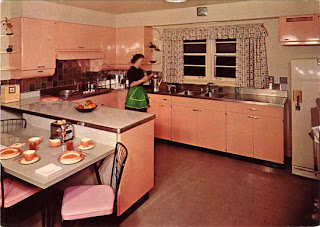 In 1955, the Lyon Company advertised steel cabinets for kitchens with this Teich postcard (D10797). Color was all the rage from pink cabinets to blue blenders. Anything but white was preferred. The cabinet's advantages included doors that opened with a tap, convenient storage in corner, ventilation, and built-in ranges.

Eighteen million women worked during World War II to keep the country and the war effort going. When the war ended, most women left or were forced out of their jobs to make way for returning soldiers.

1950s fashion was characterized by full skirts that accented a slim waistline. The conservatively flattering looks were emphasized by a pageant of colors and patterns influenced by European, Turkish and Asian cultures. Green cotton dress worn in the Mundelein area, circa 1954. 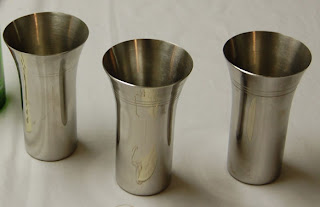 Stainless steel was the material of choice for a durable, modern look. These stainless steel mint julep cups were manufactured by Craft Manufacturing in North Chicago, circa 1950. 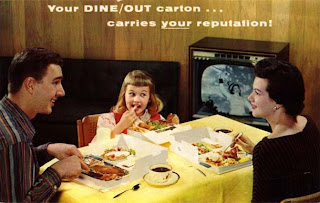 Swanson TV Dinners were introduced in 1953 and fit well into the new age of convenience. 9CK713 Teich postcard, 1959.

The postcards and objects shared in this blog are a small portion of items selected and researched by collections staff for the museum's upcoming exhibit, "Food in the Atomic Age" open November 14, 2009 to February 21, 2010.
Posted by D_Dretske at 3:19 PM 2 comments: