On June 26, 1913, the State of Illinois approved women’s suffrage. Illinois was one of many states to approve women’s right to vote in advance of the 19th Amendment to the U.S. Constitution on August 18, 1920, which granted all women the right to vote in all elections. 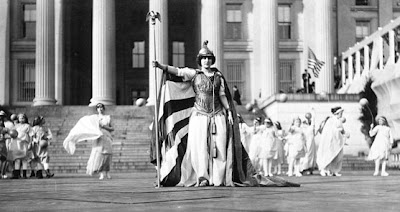 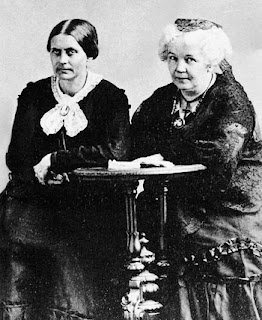 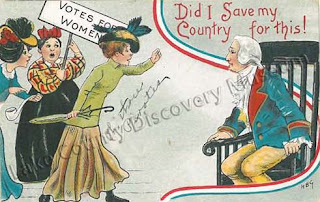 Anti-Women's Suffrage postcard, circa 1918.
Even George Washington got in on the act! (Curt Teich Company postcard BB302)

The Suffrage Movement spread, and in 1910, chapter houses of the American Woman’s League were built in North Chicago and Zion, Illinois. The league worked to “advance, protect and uplift American womanhood,” and spun off into the American Woman’s Republic, which educated women about government in preparation for when they had the right to vote.
African-American journalist and activist, Ida B. Wells-Barnett (1862-1931), fought for women's suffrage and civic education. In order to ensure the rights of Black women, Wells-Barnett worked to make them aware of their rights and established the Alpha Suffrage Club in January 1913 for African American women in the Chicago area. She encouraged women of color to become involved in politics.
The club sent Wells-Barnett and followers to the national suffrage parade in Washington, D.C. in early March 1913. To their dismay, they were asked to march at the back of the parade or not at all. Segregating the marchers was a strategic move to win the support of Southern states who opposed having more black voters on the rolls.
Unable to gain support from the white Illinois delegation, Wells-Barnett refused to march. Halfway through the parade, she mustered her strength and took her rightful place with the Illinois delegates, completing the march between two white supporters.
A leading activist, Grace Wilbur Trout (1864-1955) was president of the Chicago Political Equality League, which published pamphlets and circulated petitions to lobby the state legislature to grant women voting rights.  When she became president of the Illinois Equal Suffrage Association, the organization started focusing on creating local organizations and lobbying individual legislators. 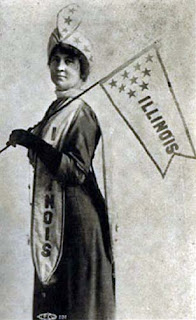 The new law made Illinois the first state east of the Mississippi River to grant women the right to vote for President of the United States.
Interestingly, the first woman to vote in Illinois in a town election did so twenty-two years before the Illinois law was passed. In 1891, Ellen Martin of Lombard noticed that the town's charter did not mention gender as a factor in who could vote. After she and 14 other women voted in that year's elections, the charter was quickly amended. 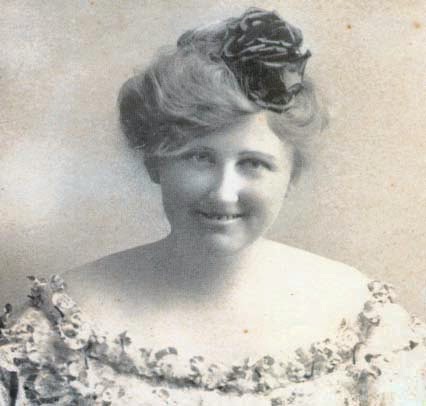 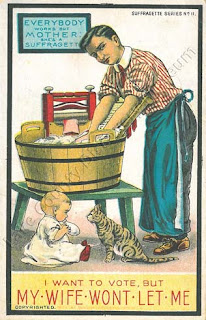 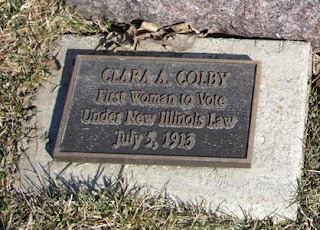 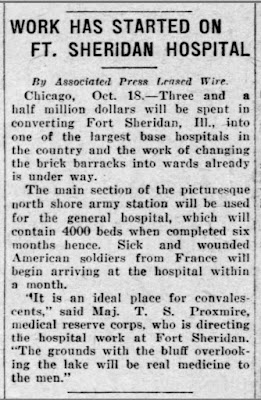 Associated Press article which appeared in The Dispatch, Moline, Illinois on October 18, 1918.
The hospital grew into a multi-building complex, including the entire Tower complex. Temporary wooden structures were constructed on the Post’s parade grounds. This was the largest military hospital in the United States to treat wounded and convalescent soldiers.
Even with the Fort Sheridan hospital and other facilities throughout the country, there were more casualties than the system could handle. In addition to treating veterans of the war, Fort Sheridan's hospital accepted civilians suffering from the Great Flu Epidemic of 1918.
In 1920, the temporary structures of Lovell General Hospital were dismantled and sold, and the parade field returned to an open state.
The memory of the horrors of WW I prompted changes in training soldiers for future conflicts, including mandatory gas mask training.
Overseas during wartime, military personnel, nurses and civilians were legally required to carry gas masks at all times. Members of the Womens' Army Corps trained in the use of gas masks in simulation chambers as part of their coursework on chemical warfare and some studied gas identification in .
To this day, researchers work to increase protection for military personnel against greater varieties of biological and chemical weapons.
The Bess Bower Dunn Museum's (formerly the Lake County Discovery Museum) Fort Sheridan Collection is digitized and hosted online at the Illinois Digital Archives.
Posted by Diana Dretske at 11:06 AM 16 comments: