Feeling a little nostalgic for the "good ol' days" of presidential campaigning? 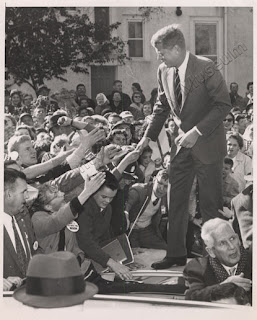 This Associated Press Photo was recently donated to the Museum. It shows Senator John F. Kennedy standing atop a car while campaigning for the presidency in Libertyville on October 25, 1960. Senator Paul Douglas of Illinois is seen at lower right.

Kennedy's route through the Chicago suburbs was printed in the Chicago Tribune the day of his visit. It listed Kennedy's motorcade leaving O'Hare Airport Inn at 9:20 a.m., and traveling by U.S. Highways 45 and 12 to Libertyville. The motorcade passed through Des Plaines and was scheduled to arrive in Libertyville at 10:20 a.m., and then onto Barrington, Carpentersville, Dundee, Elgin, Aurora, Joliet and so on.

The Tribune reported the next day that Kennedy's reception in Libertyville was "almost as chilly as the day," but you'd never know it from the crowd pressing in on him in this photograph. The Tribune went on to say that "as he went south down the Fox river valley the crowds increased in size and warmth."

The senator's day of campaigning through traditionally Republican territory ended with a rally at the York Township High School in Elmhurst in front of a crowd of 6,000.
Posted by D_Dretske at 4:03 PM 3 comments:


Community histories often include a section on the local school, but schools are rarely researched in and of themselves. One reason may be that school is so much a part of the infrastructure of our lives that it is overlooked in the grander scheme of things.

Many of us are quite sentimental for our school days; going to class reunions or meeting with former classmates over a cup of coffee to regale hilarious and sometimes embarrassing moments from the past.

In light of this curiosity, and to promote more interest in the history of schools, I've decided to regularly feature a school in my posts. One of the more substantial collections at the Lake County Discovery Museum's Archives is the School Collection. It includes histories for 52 one-room schools, photographs, and board of directors' ledger books for a number of schools.

To start, I've chosen the Swan School in Fremont Township for its somewhat central location.

The Swan School, once located at the southeast corner of Route 83 and Peterson Road, was named for Deacon Swan who donated the land for the school. The naming of schools was often handled in this way.

As families settled newly opened regions of the country, the first building constructed after a home was a neighborhood school. The first school lessons taught in Lake County were in the home of Laura Sprague in Half Day in 1836. (Laura Sprague School in Vernon Township is named in her memory). The following year, the first proper schoolhouse was built in Libertyville.

The original Swan School was erected in 1856. By 1861, there were 70 one-room schoolhouses throughout the County. 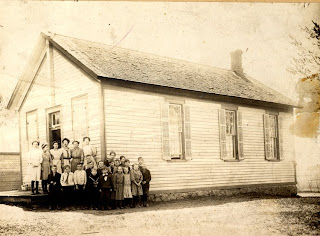 This photograph of Swan School is from around 1900. Shown is the female teacher (top right) and her scholars.

Schools were central to each community. They were often used for church services, since schools were built before churches. Meetings and social gatherings such as dances and spelling bees were also held at the schools. 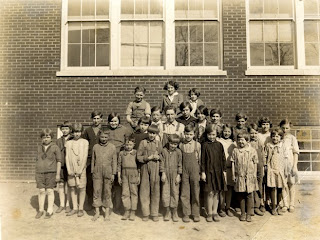 Pictured in this 1926 class photograph is Miss Josephine Kische (later Ullrich) at the top center, standing with her scholars, as they were called, in front of their new brick schoolhouse. 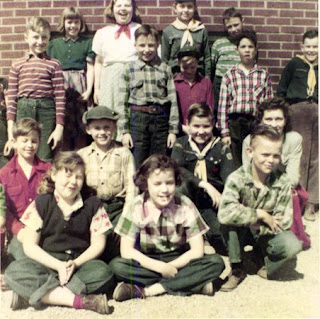 This 1953 photograph of unidentified Swan School students retains much of the rural, farming atmosphere of earlier class photos, and a touch of mischief in their broad smiles.

In 1995, the Swan School was razed. Intersection improvements made it necessary for the school to be moved, and the County of Lake tried unsuccessfully to find a buyer. The cement nameplate over the school's doorway was donated to the Lake County Discovery Museum.

For a selection of the Museum’s one-room school histories online click here.
Posted by D_Dretske at 4:04 PM 2 comments:


One of the most famous railroads in the Chicago region was the Chicago, North Shore and Milwaukee Railroad—known as the North Shore Line. The railroad operated from 1916-1963, but began its life in 1894 as a street railway line in Waukegan.

After the company reorganized in 1916, industrial tycoon and founder of Commonwealth Edison, Samuel Insull, bought a controlling interest and served as its chairman for many years, transforming it into one of the finest electric interurban railways. The main line's southern terminus was in Evanston, Illinois and northern terminus in Milwaukee, Wisconsin.

In 1941, the North Shore Line added premiere service trains called Electroliners. These trains could attain speeds of over 110 miles per hour, but generally traveled at 85-90 mph, and transported passengers from Chicago to Milwaukee in under two hours. 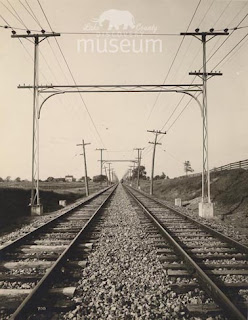 This beautiful 1920s photograph of North Shore Line tracks is part of a collection of photographs featuring the Chicago, North Shore and Milwaukee Railroad's automatic substations.

The completion of the Edens Expressway and the Northwest (now Kennedy) Expressway in the 1950s and 1960s, caused a sharp drop in passenger ridership, ultimately leading to the line's closure on January 21, 1963.

For over a decade, the right-of-way remained unused, but parts of it have since become the Green Bay Trail, now one of the most popular hiking and biking trails in the Chicago area.
Posted by D_Dretske at 9:47 AM 1 comment:


Perhaps no entertainer is better known than the beloved Jack Benny (1894-1974), who, as he loved to say, was born in Waukegan a “long, long, long time ago.”

Actually, Benny was born Benjamin Kubelsky in a Chicago hospital to Waukegan residents Emma Sachs and Meyer Kubelsky. He first performed as a violinist when he was only eight at the Waukegan Phoenix Opera House. His mother fretted that “without practicing, he’ll be a nothing.” Though Benny loved the violin, he hated to practice. He was a daydreamer and after only one year of high school was thrown out of Waukegan Central High.

In 1911, Benny left home to perform in a vaudeville act with pianist, Cora Salisbury, and eventually gained recognition. After Benny became a star of radio, film, and television, he never forgot his hometown, often mentioning Waukegan in his act, and visited frequently. 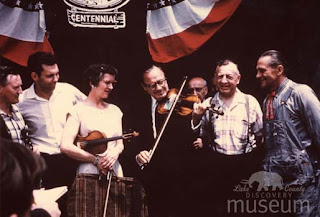 In this rare color photo, Benny is pictured celebrating Waukegan's centennial. Here he is on June 25, 1959, at the Lake County Museum of History in Wadsworth (the predessesor of the Lake County Discovery Museum), judging a fiddling contest, and no doubt mocking his own skills as an accomplished violinist.
Posted by D_Dretske at 2:46 PM No comments: 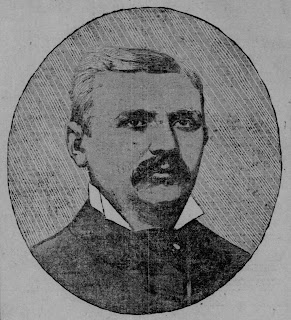 As a young man, Lehmann opened a small jewelry store on Clark Street in Chicago. His ambition was to market affordable goods to the working class, selling items for less than other stores. In 1875, he was so successful that he moved his business into a larger building at State and Adams Streets and called it, The Fair Store. He named his store "The Fair" so that people knew they would be treated fairly.

"He was," according to the Chicago Tribune, "a shrewd business manager and gained a wide reputation by the cheapness of his goods and by his practical business methods." He sold items for less than other stores, making up for smaller profits by the sheer volume of sales.

In addition to jewelry, The Fair sold men's and women's clothing, hats, shoes, notions, and household goods. One building at a time, The Fair grew and by 1882, occupied every building along the north side of Adams between State and Dearborn Streets. That same year, Lehmann saw another of his ambitions realized. He brought the Wisconsin Central Railroad to the tiny north suburban community of Lake Villa to create a thriving resort town. By the early 1900s, 18 passenger trains a day arrived in Lake Villa.

The Lehmann family was very influential in the Lake Villa area, building large estates and employing area residents. Their legacy lives on in area subdivisions and communities, including the Lehmann Mansion built by son, Edward John in 1912 as a summer home, and purchased by the Village of Lake Villa in 2001; and the Village of Lindenhurst which was created from son, Ernst E.'s, 240-acre dairy farm known as Lindenhurst. 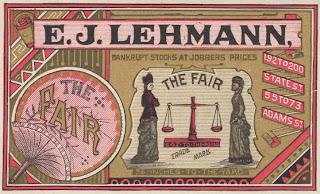 Lehmann advertised extensively, as seen in this circa 1880 ad. The Fair was the first department store to place a full-page advertisement in a Chicago newspaper.

In 1897, Lehmann built a $3 million modern store, said to be more than two times as large as the Bon Marché in Paris.

As his store expanded and fortunes increased, Lehmann's health deteriorated. In 1890, his wife, Augusta Handt, gained legal authority to commit him to the Bloomingdale Asylum for the Insane in White Plains, New York. When he died in January 1900 many theorized that the pressures of his business enterprise and interest in the development of Lake Villa was too much for him.

The family continued to operate The Fair until 1925 when they sold it to chain store magnate S. S. Kresge.
Posted by D_Dretske at 3:32 PM 11 comments:

Labels: Chicago, E.J. Lehmann, Lake Villa, The Fair Store
Newer Posts Older Posts Home
Subscribe to: Posts (Atom)
Use of material on this blog must be properly credited and may not be published without written consent. Contact Diana Dretske ddretske@lcfpd.org Thank you!
Current and future subscribers to the Lake County History Blog will receive new post notices from follow.it. New subscribers, please submit your email above.