Women Artists and the Civil War

Sculptors Edith Freeman Sherman and Lily Tolpo made significant contributions to the county's two  public Civil War monuments in Waukegan.
Though no battles were fought here, Lake County gave significant support to the war effort, sending nearly 2,000 men to fight to preserve the Union and ultimately to abolish slavery. Communities rallied around the soldiers, and women coordinated donations of quilts and bandages, and advocated for better care of the sick and wounded.
After the war ended in 1865, a Soldiers Monument Association was formed to commemorate the war dead. It would take 34 years to raise enough money to build a monument. Edith Freeman Sherman (1876-1970) was selected to create four bronze panels for the base of the monument; panels depicted the county’s troops in the infantry, artillery, cavalry, and navy.
Sherman was a talented sculptor and graduate of the School of the Art Institute in Chicago. Her instructor in the Sculpture Department was American sculptor, writer and educator, Lorado Taft. Years later, her fellow alum considered her an "important sculptress" in Chicago.
One of her most prominent commissions was to create four bronze panels for the sides of the Soldiers and Sailors Monument, which was erected on Waukegan's courthouse square in August 1899. In addition to her talent as a sculptor, her family's connection to the Civil War made her the perfect choice for the commission.
Edith Sherman's grandfather 1st Lt. Addison B. Partridge (1807-1888), and uncle Sgt. Major Charles A. Partridge (1843-1910) both served in Company C of the 96th Illinois Regiment. Her father, Isaac A. Freeman (1840-1923), served with the 1st Vermont Cavalry. Additionally, uncle Charles was the 96th Illinois' historian and chairman of the monument association. (For more info, read my post on Addison Partridge). 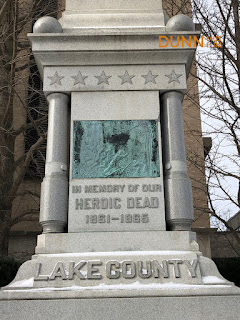 Soldiers and Sailors Monument with one of Edith Freeman's bronze friezes. Photo D. Dretske, Dunn Museum.
created represented dynamic images of the four aspects of military service during the Civil War.  gave up a summer trip to  to do the work, but the commission meant more to her than the vacation. In 1907, she married Edwin T. Sherman and set aside her art career to raise her family. After her husband's death in 1945, Edith returned to a full-time career as an artist.


Lily Tolpo (1917 - 2015) was the eldest of five children in a Chinese-Polish American family. She learned to play violin and performed as a Vaudeville musician from 1935-39, before becoming a professional artist and sculptor.

Tolpo was commissioned to do a pair of bronze bas relief plaques to complete a project started by her late husband, Carl Tolpo (1901 - 1976). 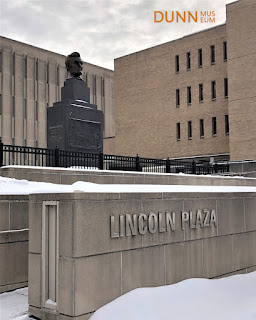 Lincoln Monument west side of county courthouse, Waukegan. Photo D. Dretske, Dunn Museum.
In 1968, Lake County commissioned Carl Tolpo to make one of his famous Lincoln monuments. There were to be two plaques on the sides of the pedestal, but funds were not available to complete the project. The monument remained unfinished for nearly three decades.

In 1995, the county revived the Lincoln monument project and reached out to Lily Tolpo to complete her late husband’s work. Lily Mark Tolpo was an accomplished Lincoln sculptor and artist in her own right, and had previously created a hanging sculpture for the county’s courthouse. Lily was a graduate of the Chicago Academy of Fine Arts where she was a student of American sculptor, Lorado Taft.
According to Tolpo, she used her husband's concepts but rendered them "in another style more in keeping with the head [of the monument]." Her relief style captured "life-like reality and action."

The scene represented on the plaque above depicts the evening of April 2, 1860 when Abraham Lincoln gave a speech in Waukegan. The speech was interrupted by a fire at the Case Warehouse at the North Pier. Tradition has it that Lincoln helped the citizens of Waukegan put out the fire. Lincoln spent the night at the home of Mayor Elisha Ferry. The Ferry home still stands at the northwest corner of Julian and County Streets.

In 2014, the Bess Bower Dunn Museum (formerly Lake County Discovery Museum) received a donation from ArtbyTolpoartist.com of the molds for Lily Tolpo's bronze plaques, and the model for Carl Tolpo's Lincoln monument.
Nearly 100 years separated the work of Edith Freeman Sherman and Lily Tolpo on the monuments. Both women were talented sculptors and uniquely qualified to lend their artistry in commemorating Lake County’s role in the Civil War.
On your next visit to Waukegan, take a stroll around the courthouse to view the impressive monuments and the work of these artists in person.

Posted by Diana Dretske at 1:39 PM No comments: