A picture is worth a thousand words.
In the case of Frances "Fanny" Hinkston, her photo was my starting point for uncovering a forgotten life. 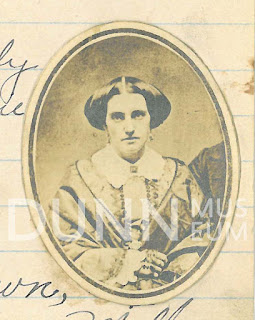 Fanny Hinkston Bacon (1831 - 1858)
Photo circa 1855. Yorkhouse School History, Collections of Bess Bower Dunn Museum.
It was difficult to research Fanny due in part to her short life, and that women's lives tended not to include activities that made it into the public record, since they were not allowed to vote or hold office. If not for this photo—so carefully placed by students in the York House School history (written in 1918) and preserved in the museum's collections—we may never have known of Fanny's existence.
Fanny Hinkston was born in New York in 1831. The date of her arrival in Lake County is unknown, but her relatives were here as early as 1836. One of the county's most distinguished settlers—Lorenzo Hinkston (1819-1905)—was most likely Fanny's brother. Lorenzo settled in Waukegan Township in 1836 in the company of Leonard Spaulding.
According to the York House School history, Miss Fanny was its teacher in 1849. This would have been during the spring/summer school term. It was generally believed that female teachers could not handle large farm boys, so they taught during the spring/summer term when boys were needed most on the farm and did not attend school.
The one-room York House schoolhouse was located in Waukegan Township on the southeast corner of today's Greenbay Road and Yorkhouse Road (near Bairstow Avenue). 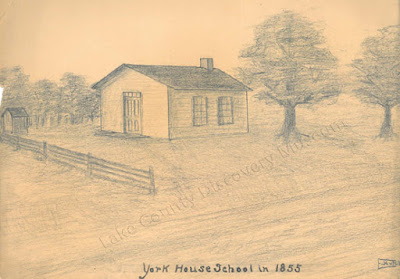 York House School as it looked in 1855. (BBDM Collection)
The plain rectangular building with no embellishments was typical of Midwestern one-room schoolhouses.
The school was first built in the early 1840s as a log cabin. This frame structure may have been
built by the time Fanny Hinkston taught there in 1849.
In October 1850, Fanny was residing a couple of miles south of the schoolhouse with Hannah Hinkston Spaulding (Spalding) and her children. Hannah was the wife of Allen Spaulding and sister of Lorenzo Hinkston. Although no online family histories connect Frances "Fanny" Hinkston to Hannah and Lorenzo, it is believed they were siblings.
Among Fanny's pupils were Hannah's daughter, Mary (1842 - 1910), and their neighbor (and relative) Emily Hinkston (1844-1931), daughter of Eber Hinkston, Jr. 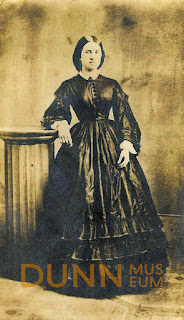 Emily Hinkston Moulton started attending the York House School
when she was five years old in 1849. She is pictured here about 1865.
(BBDM Collection)
Fanny's other pupils included: Thomas, Jerry and Oliver Brown; John, Charles and Elisa Miller; Minerva Buell, Mary Emmons, Augusta Phillips, Lily Putnam, and Mary White.
According to historian, Wayne E. Fuller, in the one-room schools, it was said that "no school, no matter how well equipped, was better than its teacher." The teacher was a one-person show, setting a good moral example for the students, in addition to teaching Reading, Writing and Arithmetic, and taking on janitorial and administrative duties.
During her time as a teacher, Fanny met farmer James Bacon. The Bacon family had moved from New York to Pleasant Prairie, Wisconsin (just over the stateline).
On May 10, 1855, Fanny Hinkston married James T. Bacon, the son of Peter and Clarinda Bacon.
Three years later, in April 1858, Fanny died. There is no record of the cause of death, but she may have died in childbirth. Fanny's obituary stated that she was the sister of "L. Hinkston." This is more than likely Lorenzo Hinkston. 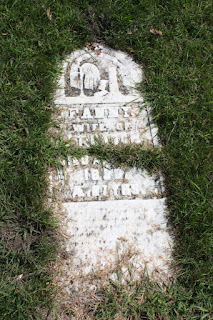 Tombstone of "Fanny wife of James T. Bacon" at Union Cemetery, Waukegan.
(Photo by Pence on FindAGrave.com)
At just twenty-seven years old, Fanny's hopes and dreams for a life with James had come to an end. Her family's grief is reflected in the symbolism on her tombstone: a weeping willow tree for their sadness, and a tree stump for her life cut short.
The story of James T. Bacon's life after the loss of Fanny will be discussed in a future post.
Diana Dretske ddretske@lcfpd.org
~ ~ ~
Sources:
Posted by Diana Dretske at 11:29 AM No comments: