The Logue home was one of the longest inhabited log structures in Lake County, and came to represent a romantic ideal of the county's settlement and the American frontier. 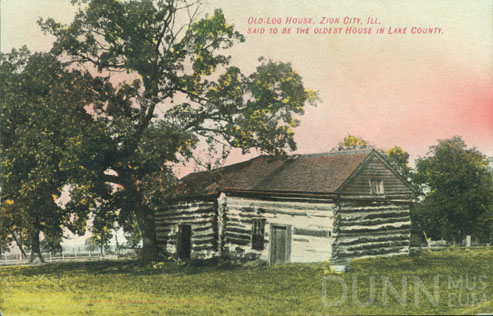 Researching these settlers was difficult due to the scarcity of information left behind. But the search was all the more satisfying when bits of their lives were found in government records, the occasional written history, and photographs.

After immigrating from Ireland, William and Bridget Logue lived in the borough of Manhattan in today's New York City. This was a tough environment for poor immigrants, and the prospect of owning land on the newly opened frontier brought hope for independence and a fresh start.
While still in New York, William acquired 96 acres in today's Zion, Illinois. 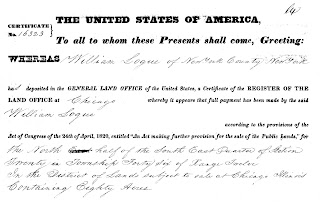 Land patent for Logue's purchase in August 1844 while living in New York County, NY. General Land Office Records glorecords.blm.gov.
Logue purchased 80-acres directly from the Federal government at $1.25 per acre costing him $100 ($3,449 today). Sixteen additional acres were purchased from Jeremiah Eaton at $25.75 per acre costing $412 ($14,210 today). The cost for the 16-acres seems unreasonably high. Or was it?

Historically, a high sale price indicates that the property had been improved. At this early date of settlement that would mean a structure had been built, likely a cabin. William Logue would have purchased the property knowing of the improvement and willing to pay more to have a shelter for his family when they arrived from New York.

Further research indicates that a log house was built by Clark G. Corser, who had purchased the land in March 1844 and sold it at a slight profit to Eaton a few months later. This was Corser's first land purchase in Lake County, and as such he built a small cabin to live in. Eaton, who came to the area in the late 1830s, had built his family homestead elsewhere, and therefore would not have built the structure on this parcel.

In the fall of 1844, William, Bridget, their six-year old daughter Margaret (Maggie), and William's brother Edward arrived in Lake County. This was a world away from Manhattan's population of nearly 500,000. In Lake County's Benton Township where the Logues' settled, there were only a few hundred inhabitants. The entire county had a population of 8,236 in 1845.

The 1861 Lake County map shows two residences on the property (above). The square on the left is a house built by William Logue, and the square on the right may be the log house built by Clark G. Corser that the family initially lived in. Perhaps these two buildings were brought together to form the double-wide house seen in historic photographs. 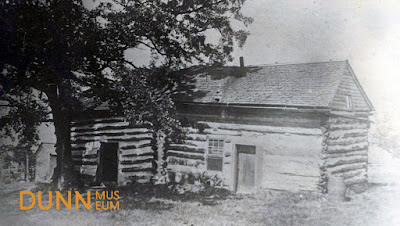 The unusual construction of the Logue house has created much speculation on when and how it was built.
Some historical data suggests Clark G. Corser built one half in March 1844 and William Logue the other half in autumn 1844. The two structures could have been used as separate residences until brought together (possibly after 1861) to form the double-wide log house. The house was located southwest of Salem Boulevard and Galilee Avenue in today's Zion. Photo circa 1900. Dickertown School History, Dunn Museum 2003.0.9.

An approximate location of the Logue log house (outlined in red) west of the McClory Bike Path along Galilee Avenue.

T. Arthur Simpson (1869-1954), county superintendent of schools and a neighbor of the Logues, recalled that the double-wide log house was located "west of the North Shore's Skokie line tracks." In 1963, the North Shore Line closed and became a trail which was later named the Robert McClory Bike Path. Based on Simpson's account and historic maps, the double-wide log house was situated west of the bike path and southwest of the intersection of Salem Boulevard and Galilee Avenue. (above) 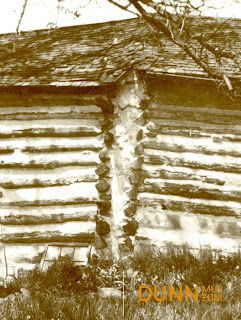 Detail of the house where the two halves meet. The protruding logs at the corners define the shape of each section of the building, adding to my suspicion that the house was originally two separate residences. Photo circa 1900. Dunn Museum 94.34.639.

Circumstances interfered in the family's prosperity. Less than five years into life on the frontier, William Logue died (prior to March 1849). This left Bridget with two daughters: 11-year old Maggie and one-year old Mary Ann. (Four other children died in infancy). Edward took up the bulk of the farm labor until his death on October 1, 1860.

By 1870, William's widowed sister, Rose Ann Kane, came to live with Bridget and her daughters.

The 1870 U.S. Agricultural Census provides a glimpse into the women's lives. Bridget, then fifty-years old, was listed as "Keeping House" for her family. Maggie, Mary Ann, and Rose were listed "At Home," which according to the Census Office could include domestic errands or family chores, but was not considered an occupation. The Logue women relied on their farm for income.

Not listed in the farm's inventory were horses or oxen. These animals were valuable to a farm's operation, but also expensive. An average workhorse cost $150 ($3,072 today), plus harness and feed. In 1870, the farm's total value of income from livestock and crops was $620 ($12,242 today).

To manage the farm without a hired man, Bridget may have rented a portion to a neighboring farmer. The women also churned milk from their dairy cows into 600 pounds of butter. In 1870, butter cost on average 15 cents per pound.

On February 26, 1876, matriarch Bridget Collins Logue died. She was buried in the newly established St. Mary's Catholic Cemetery in Waukegan.

Bridget left the farm of 100 acres, 8 cattle, 23 sheep, and household furniture to her daughters. Before the estate could be settled, Mary Ann died in May 1883. She was also buried at St. Mary's Cemetery. 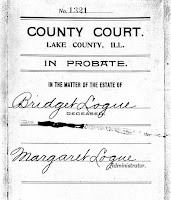 Probate record for Bridget Logue Estate filed with County Court by Margaret Logue in May 1876. Ancestry.com

The diagonal property line followed the old New York House Inn and Southport Road, which had been laid out in March 1840. The road ran northeast from the Inn near the intersection of York House and Green Bay Roads and onward to Sheridan Road in today's Winthrop Harbor. Most of this road was vacated by 1860.

About 1900, a photo of Margaret "Maggie" Logue was taken outside the family's log house. She is seated in a doorway wearing a gingham apron and holding a potted flower. 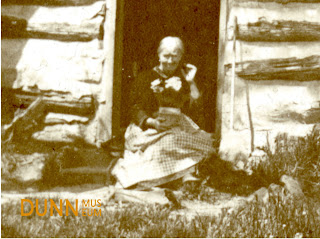 By this time, cousin Thomas Healey had joined Maggie Logue and Rose Kane on the farm. Healey took over the bulk of the farm labor. 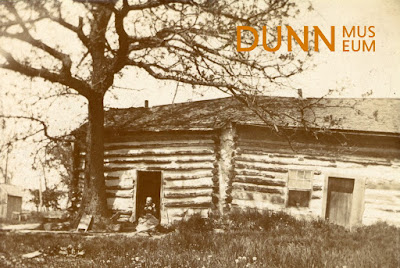 The Logue log house with Maggie Logue seated in doorway. Both sections of the house were likely built at the time of settlement in 1844. Photo by John M. Latto, circa 1900. Dunn Museum 94.34.639.

This homestead was built at the time of settlement and the only upgrade appears to have been enlarging the house by bringing two structures together. Generally, families upgraded these houses by covering them with stucco or clapboard siding. The log houses were hidden from view until torn down decades later to reveal (to everyone's surprise) the house's true origin.

The fact that the Logues' did not put siding over the hand-hewn logs made it a charming curiosity to locals. Knowing the hardships the family faced, it may also indicate they lacked the means to make cosmetic improvements to the structure. 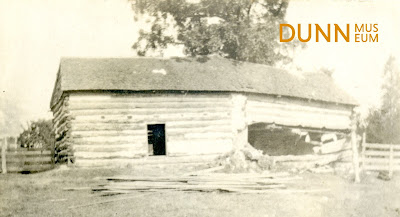 The Logue house being razed, and the large oak tree already gone. Date unknown (post-1903). The fence was built after the property was sold to Dowie and was the type used to pasture horses. Dunn Museum 94.34.640

Maggie retired to Waukegan where she lived until her death on May 19, 1920.

Posted by Diana Dretske at 4:10 PM No comments: