The wedding was big news on the society pages of the Chicago papers, evoking a bygone age of knights in shining armor and fair maidens. 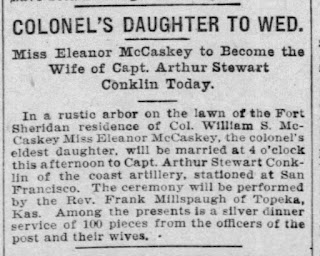 Chicago Tribune, August 26, 1903.
Miss Eleanor "Dottie" McCaskey was known as the "daughter of the regiment." Her parents were Colonel William S. McCaskey (1843-1914), commander of the 20th Infantry, and Eleanor "Nellie" Garrison McCaskey. The bride's father and the groom, Arthur S. Conklin, served together in the Philippines in the 20th Infantry.
A bugle sounded the beginning of the wedding procession, followed by the 20th Infantry Band playing the wedding march from "Lohengrin." 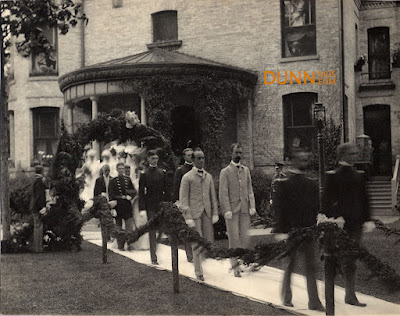 From left to right are the bridesmaids (background); father of the groom and Mrs. McCaskey; bridegroom Arthur Conklin with his mother; William Reed and John McLeary; C.I. McCaskey and William Morris; Garrison McCaskey and H.D. McCaskey. Dunn Museum 2009.2.6.1 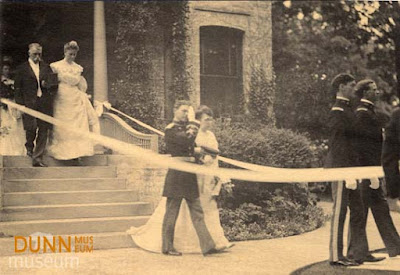 Captain Arthur S. Conklin (1872-1960), dressed in the red trimmed suit of the artillery, with his mother, Mrs. Conklin, of Elmira, NY on his arm, and behind them the bridegroom's father and Mrs. McCaskey, walking from Colonel McCaskey's residence at Fort Sheridan to the lawn where the wedding would take place. Dunn Museum 2009.2.2 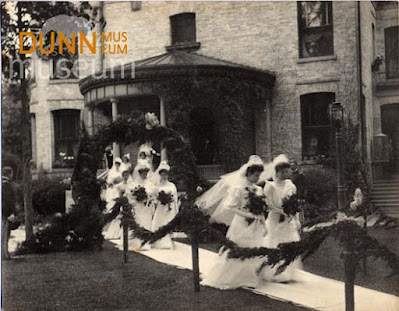 View of the bridesmaids and bride with her father coming out of the Colonel's home and walking along a fabric path lined with evergreen boughs. Dunn Museum 2009.2.8 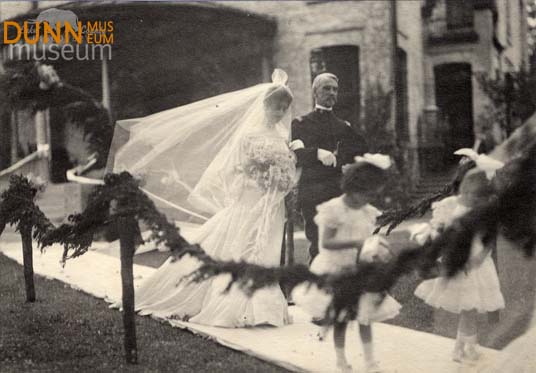 The bride, Eleanor McCaskey (1881 - 1958) escorted by her father, Colonel McCaskey, as they leave the family's home at Fort Sheridan for the wedding ceremony on the lawn under the oak trees. Also in view are the flower girls, Frances and Helen Meacham. Dunn Museum 2009.2.4 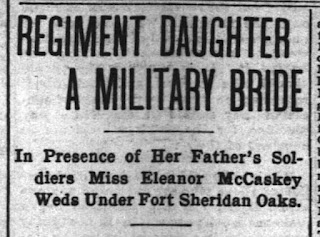 The Chicago Inter Ocean, August 27, 1903.
The ceremony was interrupted by the Second Cavalry's mascot dog. Depending on the source, the dog was either Bruno, the St. Bernard, or Bolivar the Mastiff. In either case, all agreed that the dog caused a bit of a stir as it wandered about the scene. According to the Chicago Record Herald newspaper, there was "intense resentment in the ranks of the blue-clad privates when a 'cavalry dog' tried to interrupt the wedding." 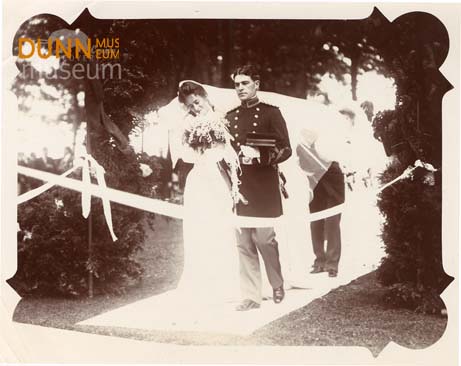 The Chicago Inter Ocean reported that, "The gloomy skies and the dark shadows of the surrounding trees were in strange contrast to the bright uniforms and white dresses of the bridal party and the ecclesiastical attire of Bishop Millspaugh," the officiant.

The newlyweds honeymooned at Yellowstone Park before making their home at the Presidio in  San Francisco, California where Captain Conklin was stationed with the Pacific Coast Artillery. Arthur Conklin was eventually promoted to Brigadier General and is buried in Arlington National Cemetery. 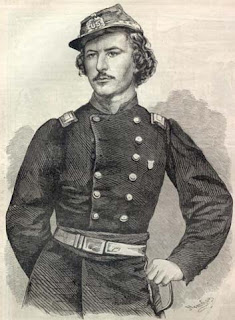 The first hero of the Civil War was Colonel Elmer Ellsworth of the Zouave Corps.

In the years before the war, Ellsworth was considered "the most talked about man in America." Even more so than his friend, Abraham Lincoln.

When Ellsworth was 17, he moved to Chicago from New York State, and became prominent in the state militia.

In 1857, he met Charles DeVilliers, a French physician and expert swordsman who had served in the Crimean with the French Chasseurs d'Afrique - Zouaves.

According to "American Civil War Zouaves" by By Robin Smith & Bill Younghusband, the original Zouaves were natives of the Zouaoua tribe mixed with French settlers, who had served with the French Army during France’s North African campaigns in the 1830s. Their Native North African dress – baggy trousers, short jacket, and fez – became the basis of the famous Zouave uniform. The French originally raised two battalions of native Zouaves; but by the time of the Crimean War, three Zouave regiments had been created entirely of Frenchmen.

Meeting DeVilliers, prompted Ellsworth to learn more about French light infantry drill. After a brief period of studying law in Springfield, where Ellsworth became friends with Lincoln, he returned to Chicago and formed the United States Zouaves. 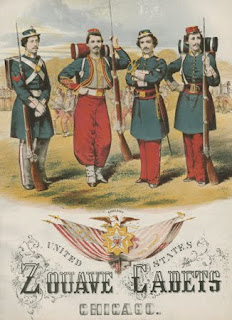 By 1860, the Zouave Cadets were considered the finest militia in the Midwest, and role models for their high morals. In other words, they were Temperance men. Ellsworth promoted his Zouaves by challenging other state militias in drill competitions. The Zouaves handily beat their competitors (some conceded after watching them drill), and awed thousands of spectators, becoming known throughout the country for their "appearance of dashing ferocity."

Ellsworth's militia spawned a national Zouave craze. Overnight it seemed, Zouave units sprang into existence. Even paper dolls were sold of the uniquely and colorfully dressed young militia men. He visited towns throughout the region training young men, including students at Lake Forest College (then known as Lind University) where they learned marching and how to handle Springfield rifles.

Ellsworth campaigned on behalf of Lincoln's bid for president, and after Lincoln's win was put in charge of security for the party going to Washington, D.C..

In D.C., Ellsworth formed a new Zouave unit from Manhattan's volunteer firemen called the Fire Zouaves. Signs of the approaching war were everywhere, including that of a Confederate flag flying defiantly on the rooftop of the Marshall House in Alexandria, Virginia, all too visible from the White House. 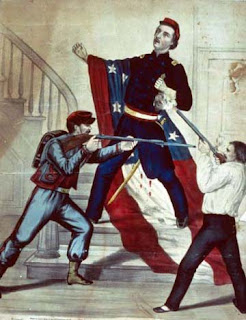 On May 24, 1861, the day after Virginia seceded from the Union, U.S. troops were sent into Alexandria. Ellsworth's Zouaves went in to cut the city's telegraph lines, and in the process went past the Marshall House. Deciding to end that Rebel taunt, the Zouaves, led by their "gallant and idolized commander," stormed the hotel to retrieve the flag. On their way back down the stairs, the Zouaves were encountered by the innkeeper who fired a shotgun at Ellsworth, killing him instantly. Zouaves' Corporal Brownell then shot and stabbed the innkeeper with his bayonet.

The loss of Ellsworth was a national tragedy. Flags were lowered to half-mast in D.C., and President Lincoln ordered that Ellsworth's body lie in state in the White House. 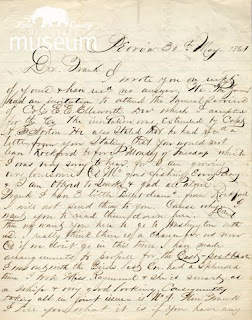 Letter to Major Frank Peats of the 17th Illinois Infantry from George B. Swarthout, Peoria, Illinois, May 30, 1861. Swarthout writes: "We 'The Zouaves' had an invitation to attend the funeral reviews of Col. E.E. Ellsworth deceased which I accepted for the Co." (Frank Peats Collection Dunn Museum 94.5.139). 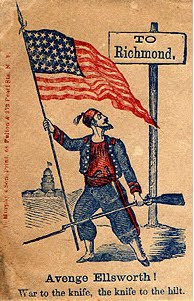 A memorial was held at Bryan Hall, a public auditorium on Clark Street in Chicago. Many mourned Ellsworth by enlisting, writing poems and editorials, and carrying carte-de-visite photographs of the war's first martyr. 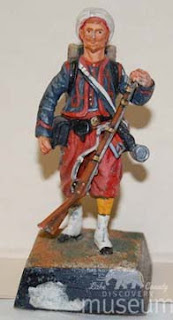 Ellsworth's Zouaves continued to make appearances, including one in Waukegan on July 4, 1862.

Newer Posts Older Posts Home
Subscribe to: Posts (Atom)
Use of material on this blog must be properly credited and may not be published without written consent. Contact Diana Dretske ddretske@lcfpd.org Thank you!
Current and future subscribers to the Lake County History Blog will receive new post notices from follow.it. New subscribers, please submit your email above.