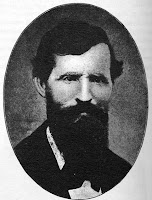 One of the most enlightening sources for what life was like in early Lake County is the Easton Store Ledger, dating from 1844-1846.

The ledger reveals the names of early farmers and the types of merchandise available.

(above) Easton from History of Lake County, Illinois, 1902.

In addition to being a store proprietor, Easton was Half Day's post master from April 1841 to July 1845. It was common for the general store to double as the post office.

By the 1840s, Half Day was a bustling community on the stagecoach route running on the Chicago & Milwaukee Road (present day Milwaukee Avenue/Route 21). 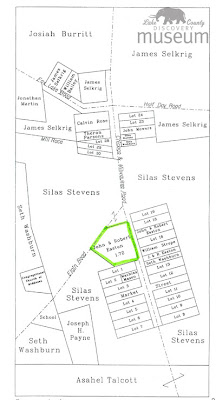 Using land records, researcher Al Westerman, created this map of Half Day in 1846. The property where the Easton store was located is shown highlighted in green.

The town of Half Day was not named for being a half day's ride from Chicago, but for Chief Aptakisic whose name translates to Half Day. Click here for my post on Aptakisic-Half Day. 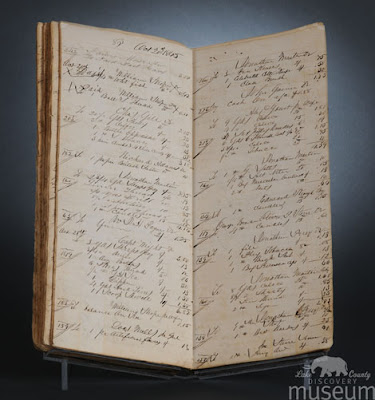 Like other store proprietors of the time, Easton kept a "day book" to track his customer's purchases and payments. (shown above as photographed by Mark Widhalm) The ledger is a who's who of area residents, including Jacob Mowers, Elijah Gridley, Thomas Payne, Mathias Mason, and most notably Captain Daniel Wright, a veteran of the War of 1812 and the county's first non-native settler.

The store also carried farm supplies such as hoes, shovels, cotton knives and seeds; and lead, shot, powder, and percussion caps for guns.

A great number of items were available on order for customers, including furniture. One item not sold at the store was flour. This may seem curious, but flour was readily available at Kennicott's gristmill just south of the store along the Des Plaines River. 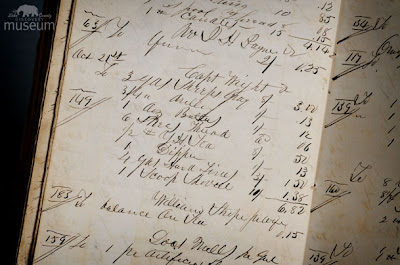 Shown here are the purchases of Captain Wright for Monday, October 20, 1845. Included in his order are 3 yards Sheep's Gray (fabric), 3/4 " Drilling, 1 dozen buttons, 6 skeins thread, 1/2 # Y.H. tea, 1 dipper, 4 yards Hard Times, and 1 scoop shovel. The purchase was charged, like many of those by Easton's customers. This record is also the only known primary source document of Wright in Lake County.

Date written by John Easton in his store's day book.

Cover of the Easton Store day book. The original leather cover can barely be seen under the images pasted onto it. (LCDM 97.1.1)

The Gerbert family found the ledger in the house, and re-used it as a scrapbook, pasting news clippings over John Easton's store accounts. The clippings date generally from circa 1898. 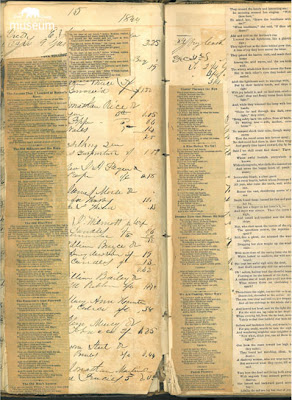 John Easton's writings are covered with newspaper clippings, pasted there by the Gerbert Family of Half Day, circa 1898.

As a historian, the re-use of the store ledger as a scrapbook is admittedly horrifying, but it is also fascinating. There has been some discussion of restoring the ledger to its original condition by removing the clippings, but I hesitate to give up that aspect of the ledger. The scrapbook pages give us a glimpse into the next generation of Half Day residents, what they valued, and how they conserved resources by finding a new use for an "old ledger."

My continued appreciation goes to Jill Martin (1940-2009), who diligently transcribed the Easton store ledger, and researched some of its customers and their purchases. A full transcription of the ledger is available for research at the museum's Lake County History Archives.