Mineral springs were a popular investment in the late 1800s. While hot springs were developed as spas and resorts and a place to re-invigorate the body and soul, the water from mineral springs was sold by the glassful or bottle and said to cure stomach ailments, headaches and more.

Lake County had its share of mineral springs inland from Lake Michigan. The natural artesian springs bubbled to the surface of the land. Investors had the water analyzed and then advertised it as a "water cure." Even Besley's Waukegan Brewery, which used water from a local spring, claimed that the water gave its brew curative properties.

In Waukegan there were four springs—Glen Flora, McAllister (aka Quintette), Magnesia, and Sag-au-Nash.

The Glen Flora Springs was probably the best known. It was located in a ravine east of Sheridan Road on the property of the estate of Calvin C. Parks (1805-1860). A hotel was built to accommodate the tourists coming to enjoy the spring. 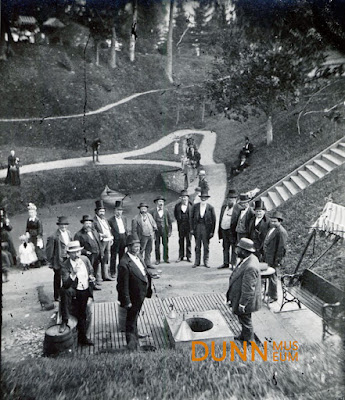 Dedication day at Glen Flora Springs, circa 1880. The two men at front left are holding glasses of water. Notice the funnels next to the spring's hole for ease of pouring into bottles. Dunn Museum 92.32.264. 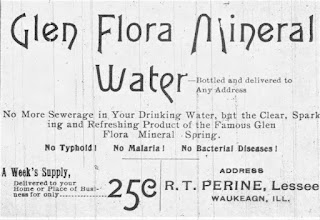 Advertisement for Glen Flora Springs boasting "no more sewage in your drinking water." July 7, 1900 Waukegan Daily Sun. www.newspapers.com
The McAllister Springs were originally called Quintette Springs. This spring was owned by Judge McAllister, and located south of Belvidere Road and west of McAllister Avenue in the present Roosevelt Park. 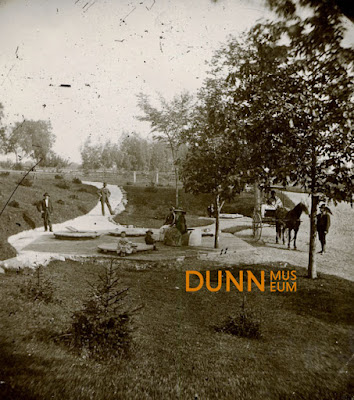 Like other local springs, the McAllister Spring was landscaped to give it a park-like setting. The site would become Roosevelt Park, Waukegan Park District. Dunn Museum.
The Sag-au-Nash Spring was owned and operated by Elijah M. Haines. The spring's location was south of the Waukegan River in the central part of the city.

The letters of an unidentified woman traveling by rail in 1881 were published by the Chicago and Northwestern Railway Company under the title, "My Rambles in the Enchanted Summer Land." The letters testify to the beauty and value of these springs. She wrote that Waukegan's springs: "attract hundreds of summer visitors who desire rest and healthful amusement, together with the benefit derived from its valuable mineral water."

Of her visit of the Glen Flora Springs she wrote: "They were nestled lovingly in a romantic glen, the sunlight sifting through the trees..."

She also visited the Magnesia Mineral Springs, which are referred to as "Powell's water" for its owner J.F. Powell. The Magnesia Springs were located on Glenrock Avenue between Bluff and Lincoln. 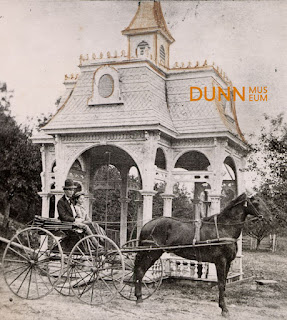 Magnesia Springs with its beautiful gazebo. Dunn Museum.
The traveler wrote that Magnesia Springs "has effected many remarkable cures, which are so astonishing, yet perfectly reliable, that their repetition savors strongly of the 'legendary.'" 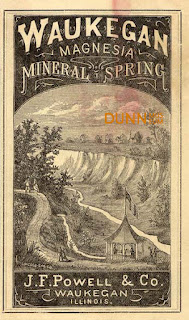 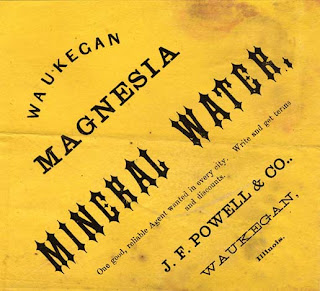 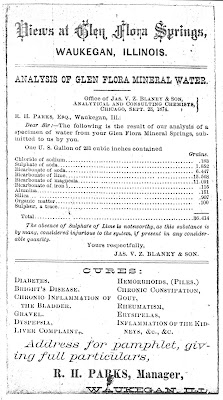 Advertisement for Glen Flora Mineral Springs showing an analysis of its water, 1874.

What became of Waukegan's springs and also those in Libertyville (Abana Springs) and Highland Park (Sparkling Springs)? Simply put, people pressure. The demand for water use through residential and industrial development depleted the water level of the springs to the point where they no longer bubbled to the surface.

As far as I know, the only spring still in operation is Highland Park's Sparkling Spring Water Company. When it was founded in 1896 by William Tillman, the water gushed out so forcefully it was called "sparkling spring" for the way it jumped in the sunlight.
Posted by D_Dretske at 3:11 PM 15 comments: 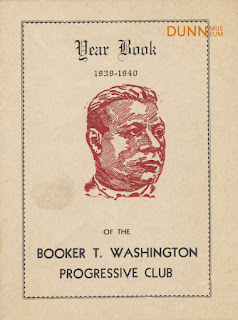 The club was founded by retired railroad porter, Richard Henry Williamson (1865 - 1953), who came to Zion in 1902 to join John Alexander Dowie's church. Dowie's strongly enforced policy against racism attracted African-Americans to join his church and settle in Zion. 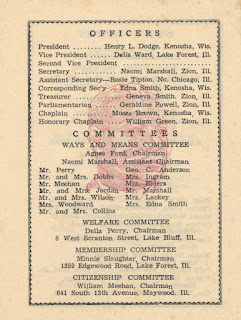 Club brochure page listing officers and committees. Booker T. Washington Progressive Club Collection, Dunn Museum, 94.26.
The Booker T. Washington Progressive Club's purpose as stated in its constitution was to "bring together at frequent intervals those who are interested in promoting the cause of good citizenship, better civic relations and any topic that may improve local relationships."
Membership was open to all, not only African-Americans. People from Kenosha, Zion, Waukegan and neighboring communities joined. 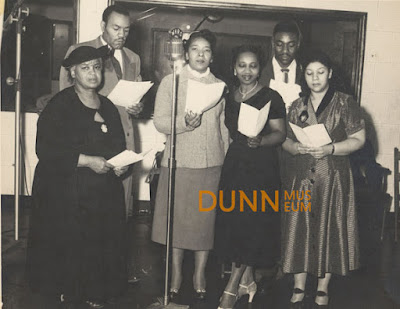 Club members during one of their regular broadcasts on WKRS Radio in Waukegan, circa 1955. At left is Naomi Williamson Marshall (1895-1968), club president and the daughter of the club's founder. Standing to the right of Mrs. Marshall (left to right) are Samuel Payne, Pearl V. Payne, Beatrice Carter, unidentified man, and Rachel Penny. Booker T. Washington Progressive Club Collection, Dunn Museum 94.26.78. 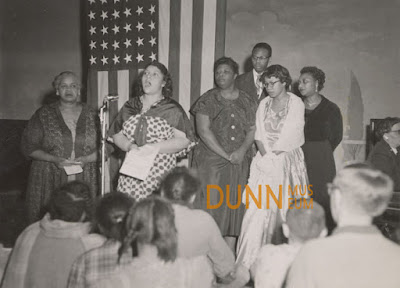 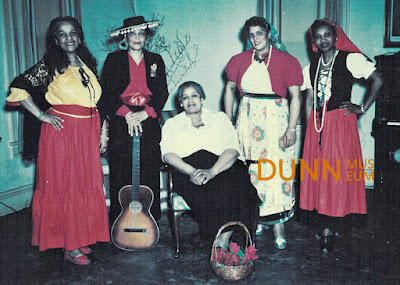 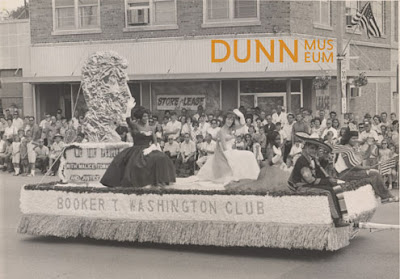 The club was instrumental in bringing well known African-American artists to the community to perform, including the popular tenor, Pruth McFarlin, and Booker T. Washington's son, who spoke at a club ceremony. 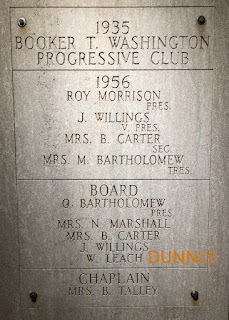 Cornerstone placed on the Club's clubhouse in Zion, Illinois, 1956. On exhibit at the Bess Bower Dunn Museum, Libertyville, Illinois. Booker T. Washington Progressive Club Collection, Dunn Museum 2020.0.1.
The club was most active through the 1960s after which membership began to decline. In 1982, the club dissolved and sold its clubhouse at 2103 Gabriel in Zion. Today, the building is used as a gathering place for Islamic worshippers.


Happy birthday, Mr. Lincoln! On this day in 1809, Abraham Lincoln was born in Hardin County, Kentucky. His family settled in Illinois in 1830, and the next year, Lincoln struck out on his own.

Lake Countians long for connections to the great orator and 16th President of the United States, as evidenced by multiple local legends. 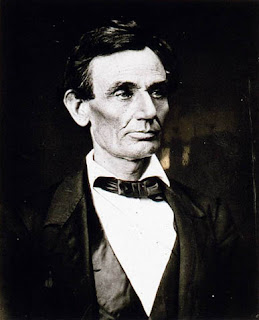 Lincoln's only documented visit to Lake County occurred in April 1860. While in Chicago, Lincoln took the train to Waukegan to give a speech and to visit his attorney friends, Elisha Ferry and Henry Blodgett. He had dinner at the Ferry home on Julian Street, followed by a speech at Dickinson Hall. A fire broke out at a nearby warehouse, ending the speech, and Lincoln is reported to have given a hand in putting out the blaze. Afterward, Lincoln returned to the Ferry home and spent the night, giving the home the legitimate claim of “Lincoln slept here.” The bed in which he slept is displayed at the Waukegan Historical Society.

Though this was Lincoln's only visit to the county, that hasn't stopped folks from finding other connections real or imagined.

Lincoln as photographed by Alexander Hesler, June 1860. (above) On Lincoln's visit to Waukegan in April, he reportedly got a shave at Philip Brand's barber shop. Though Brand could well have given Lincoln a shave, the photo above, taken two months later, easily discounts Brand's other assertion of being "the last man to shave Lincoln."

The earliest supposed connection between Lincoln and Lake County takes us back to the Black Hawk War of 1832. Local legend states that during the war, Captain Lincoln and the troops serving with him, marched to the York House Inn on Greenbay Road in Waukegan Township. However, the legend fails to mention that Lake County was not yet settled, and the York House Inn was built in 1836—four years after the war ended.

Additionally, troop movements archived in the State of Illinois' Archives, reveal that the closest Lincoln's company came to Lake County was Janesville, Wisconsin.

A second legend claims that Lincoln had a law office in Half Day. As exciting as this might be, there is no historical documentation to substantiate this claim and it simply doesn't add up. An enterprising young attorney would have certainly touted the fact that he had not one, but two offices, but Lincoln never mentions Half Day in his papers, letters or autobiographies.

Lincoln's family home and law practice were in Springfield, 200 hundred miles away. He rode the circuit on horseback six months out of the year for the Eighth Judicial Circuit in central Illinois, again hundreds of miles away.

He did have reason to come to northern Illinois; after the federal court relocated from Springfield to Chicago in 1855, Lincoln occasionally traveled to Chicago for court purposes. However, an occasional court appearance in the City would not make it feasible to hang his shingle in Half Day where he would have to rent or buy a building and duplicate his law library. Travel was slow and wearisome and a “commute” from Half Day would not be practical for timely attendance at federal court. Circa 1920 postcard of the Half Day Inn.

To entertain this notion further, we would have to wonder at Lincoln's common sense. For such an industrious man, why would he choose the tiny farm community of Half Day over bustling Libertyville or Waukegan—with its courthouse—to establish a second office?

The third legend is the most promising. It claims that Lincoln spent the night in Hainesville while visiting his friend Elijah Haines. There is no primary source documentation that this visit occurred, but locals have passed it down through generations. Oral history is sometimes the only clue to past events, and there is often truth in it, though sometimes just a grain. In this case, I believe that grain to be the fact that Haines and Lincoln were friends, and that locals were eager to promote it.

The men first met in Chicago during the Great River and Harbor Convention of July, 1847 as delegates from their regions. This convention was in response to President Polk vetoing funding for river and harbor improvements in the Great Lakes. 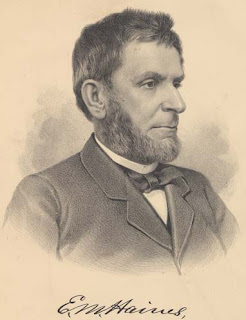 Haines went on to serve in the State Legislature, and had occasion to meet Lincoln in Springfield where Lincoln lived and worked. As mentioned above, Lincoln’s position as a trial and appellate attorney kept him occupied in central Illinois with occasional trips to Chicago. Taking a 49-mile detour from Chicago to visit a friend in Hainesville wasn’t impossible, but unnecessary since the men could see each other in Springfield.

A key factor in determining the credibility of Lincoln lore is the amount of documentation. Lincoln is one of the most documented people in American history. People went to great lengths to record his life, including Lincoln, who wrote three autobiographies.

If you've heard other Lake County Lincoln legends, please let me know. I'd enjoy hearing them and adding them to the list.
Posted by D_Dretske at 10:09 AM 2 comments:

The Norwegians say, "There is no bad weather, only bad clothing."

With six weeks of winter left (thanks Mr. Groundhog!), I thought it'd be fun to share photos of how folks dressed in winter's past. Some more fashionably than others. 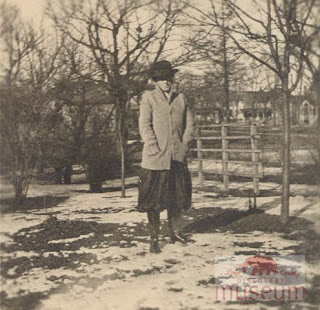 This photo of Bess Bower Dunn was taken in Waukegan about 1899. Bess is dressed in active wear that's actually a bit suffragette for the day—a cozy, and mis-buttoned cardigan sweater, bloomers, boots and hat. Women who did not wear skirts were considered highly suspicious and often criticized. 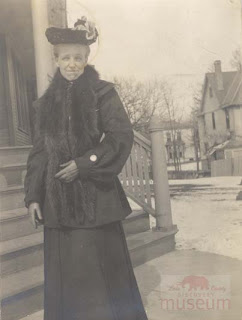 Here's a photo of an unidentified woman, who may be Bess Dunn's mother, wearing a long skirt, heavy coat, fur stole and hat. The fur is most likely mink. (Dunn Museum, Bess Dunn Collection) 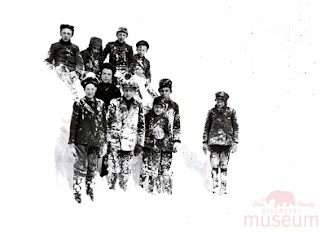 Diamond Lake School boys out for a day in the snow, near today's Countryside Lake, 1908. 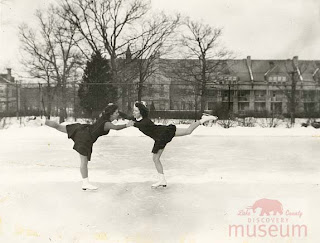 More winter sports fun this time with members of the Women's Army Corps, Ann Bertsos and Polly Wassen of Company A. The WACS are skating on the ice rink at the east end of the Parade Grounds at Fort Sheridan, circa 1944. (Dunn Museum 92.24.571) 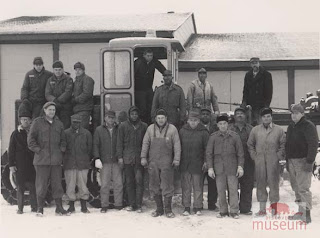 Of course, the reality of winter is that someone's got to clear the snow! The Fort Sheridan snow removal crew is pictured here on February 8, 1967.