In the spirit of cycling season, I'd like to share some bicycle images from the museum's collections. 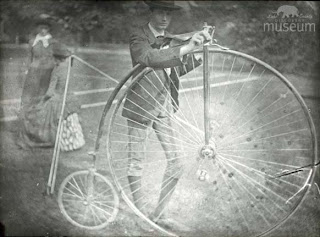 The front wheel of these unusual bicycles became larger as makers realized that the larger the wheel, the faster you could travel. 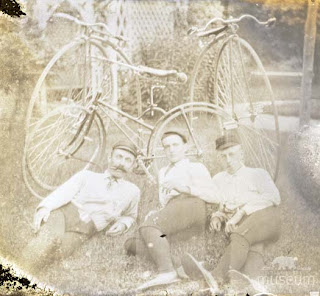 The high-wheel bicycle enjoyed a great popularity among young men of means (they cost an average worker six month's pay). They were extremely popular in the 1880s, despite being dangerous to ride. Glass negative, Lake County location unknown, circa 1880. LCDM 93.32.146 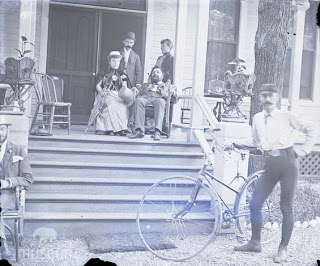 The next innovation in cycling (shown above) allowed the rider to travel at a speed the same as the huge high-wheel bicycles. The bicycles still had the hard rubber tires, but did not have the long, shock-absorbing spokes of the high-wheel bikes, making the ride much more uncomfortable. Glass negative, Lake County location unknown, circa 1890. LCDM 93.32.111. 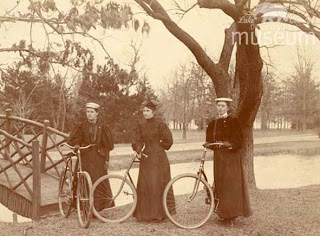 Bicycling was one of the few activities during the late 19th century for which women could wear trouser-style garments. Though it is difficult to tell in this photograph (above), these women may be wearing "divided skirts" that were designed for mobility as well as modesty. Photo, circa 1885. LCDM 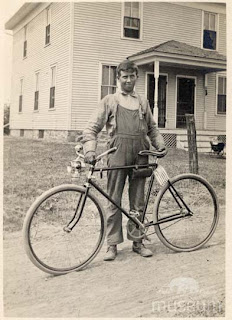 "When I see an adult on a bicycle, I do not despair for the future of the human race." - H.G. Wells. 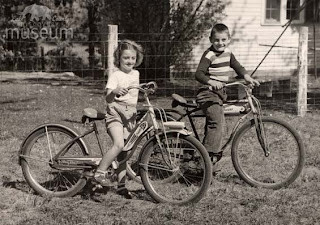 The kid's bike (shown above) was introduced after the First World War by several manufacturers, including Mead, Sears Roebuck, and Montgomery Ward, and Schwinn slightly later. These bikes revitalized the bike industry and featured fabulous automobile and motorcycle elements. By the mid-1950s, kid's bikes had taken on design elements of jet aircraft and rockets, but became much simpler in design by the 1960s. 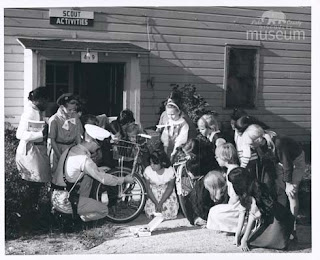 "Safety Class at Fort Sheridan, October 10, 1965." Sergeant George Stacey of the 204th Military Police Company shows members of a Fort Sheridan Girl Scout Troop how to affix reflector-type safety tape to their bicycles. The distribution of the safety-tape is part of a bike safety class given to youth groups by members of the military police company. U.S. Army photo by SP-5 Parzych. LCDM 92.24.731 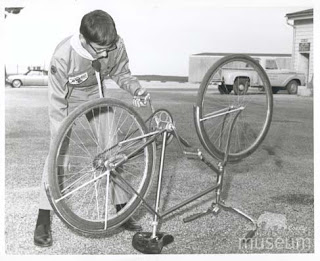 Good luck to all the cyclists, professional and recreational. Stay safe!

Immaculate Conception Church in Waukegan is one of the oldest parishes in northern Illinois. The church was founded by Irish immigrants to Lake County as St. Anne's parish in Shields Township in 1841, and then as St. Mary's in Little Fort in 1844.

In 1843, Michael Dulanty (1799-1886), originally of County Tipperary, Ireland, purchased two lots in Little Fort (now Waukegan) for the new church site. Dulanty was acting under the advice of Reverend J. Geurin who was ministering in Shields Township to Catholics in Lake County. Interestingly, Dulanty was the best-known early tavern and hotel owner in Lake County. His first establishment, a stage relay station and tavern, was located on Green Bay Road between Highland Park and Highwood and was known as the Centerville Inn. In 1844, Dulanty sold this inn and his family's 120-acre homestead and moved to Little Fort, no doubt to take advantage of the booming business in the new county seat and to be closer to his parish's new church.

Despite popular belief, Dulanty did not donate the two lots, but rather sold them to the Catholic bishop of Chicago for the establishment of a church on September 2, 1844. The land was located at the northwest corner of County and Water Streets. The land record of the transaction shows the name of the church as St. John's, however, all subsequent records list the church's name as St. Mary's.

The first clergyman sent from Chicago to minister to the new parish and to commence the construction of the church was Reverend B. McGorisk. The church was completed in 1847. 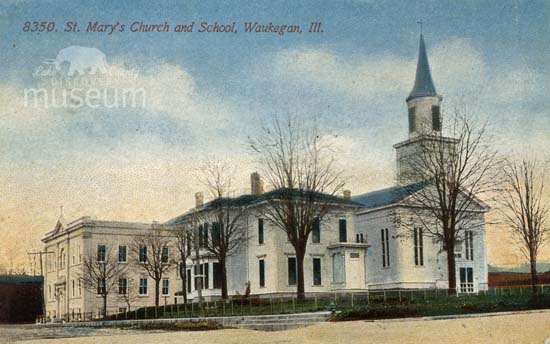 St. Mary's (Irish) Catholic Church was 62 feet in length by 36 feet wide, the walls 18 feet high and the steeple an additional 80 feet high. 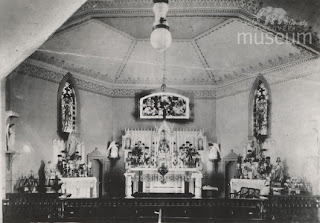 The parish was renamed St. Bernard by 1854. In 1857 a school was established. The church and school were enlarged around 1859. In 1864, the parish was named Immaculate Conception.

In 1927, plans were underway to build a new, larger church, closer to the center of Waukegan's growth. Reverend Shea undertook the monumental task of choosing a site, getting the land purchased, and helping the parish raise $250,000 for the new church. 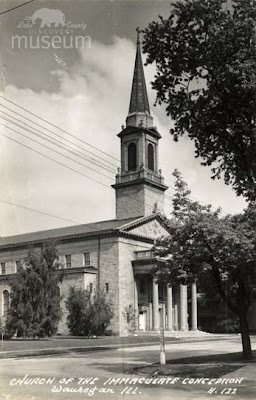 Architect, Joseph W. McCarthy (1884-1965), designed a Georgian Colonial structure, closely resembling the style of the first church. The design was significant as it was considered very American and not typical for a Roman Catholic Church. The church's spire stands 158 feet, and at the time, was the tallest structure in Waukegan. The bell from the first church was placed in the new church's spire. 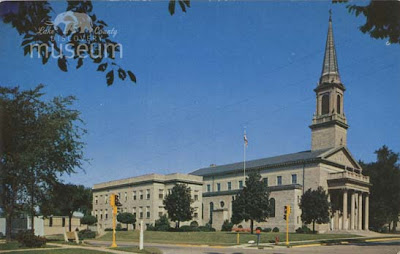 The first Mass in the new church was celebrated by Rev. Francis Shea, December 8, 1929, on the Feast of the Immaculate Conception. The church was dedicated on May 11, 1930 by George Cardinal Mundelein, Archbishop of Chicago. Cardinal Mundelein had taken a personal interest in Waukegan having one of the finest churches in the diocese. 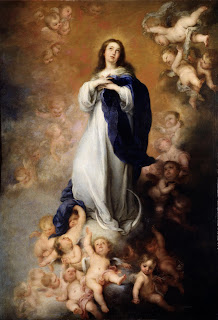 Interior of the Church showing the marble columns, crystal chandeliers, and at center the large mosaic based on Murillo's Immaculate Conception of the Venerable Ones. Photo by Manuel Gonzalez, Dec 2019 (Google.com maps) 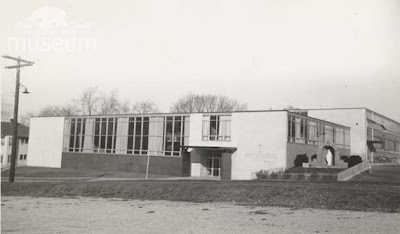 The school remained open at the original site until 1955, when a new school building was dedicated at Grand Avenue. View of the Grand Avenue school location (above), circa 1960.

Immaculate Conception, or I.C. as locals call it, was my parish and school growing up. I have very fond memories of my grade school years there, and going to Mass in what I considered the most beautiful church in the world.

In recent years, the church and school have been consolidated as the Most Blessed Trinity Catholic Churches of Immaculate Conception, Queen of Peace, and Holy Family, and the Academy of Our Lady.

Posted June 3, 2011
In recent months, there has been talk of razing the legendary Mineola Hotel in Fox Lake. This would be a terrible loss for Lake County's heritage. 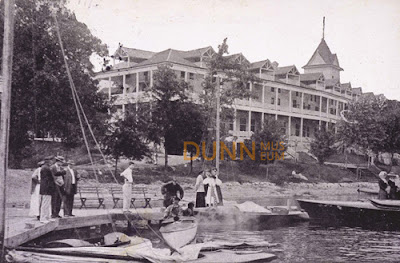 Mineola Hotel, 1913. Dunn Museum 96.12.2
For those unfamiliar with the grand dame, the Mineola is located at 91 N. Cora Avenue, Fox Lake, and was built in 1884 (or 1889) by the Mineola Club of Chicago (some have credited it to members of the Chicago Board of Trade). At the time, the Chain o' Lakes had a booming resort industry, due largely to increased access to the area by train. In 1882, the Wisconsin Central (later Soo Line) Railroad opened.

The 100-room hotel boasted of hot and cold running water, a beautiful natural setting, boating, fishing and hunting opportunities, all for the affordable rate of $2 and up per day. It is believed, but not confirmed that the hotel's veranda was designed by Alphonse Howe & Charles Caskey, the architects of the famed Grand Hotel on Michigan's Mackinac Island. The hotel was built as a private clubhouse for Chicago’s elite, but by 1891 it had been sold to Edson C. Howard, who remodeled it into a public hotel. 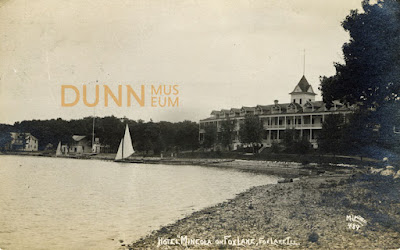 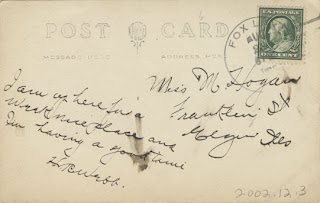 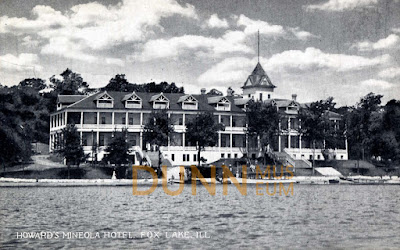 Though it's been the dream of the Jakstas family to fully restore the building those efforts have been met with mixed success and much difficulty. After 68 years in the family's ownership, Pete Jakstas is considering retirement and the sale of the hotel, marina and surrounding 17-acres. 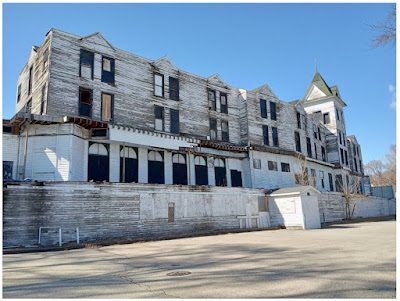 Photo of the Mineola from Chicago Tribune article, May 6, 2022.
Update: As of May 2022, the Jakstas property was under contract for purchase by developers. The historic Mineola Hotel will be razed and a new boutique hotel complex built "with aesthetic features from the original hotel" incorporated into the new building. Source: "Fox Lake Hopes to Bring Hotel to Mineola Lakefront Site" by Greg Harutunian, Chicago Tribune, May 6, 2022.
- Diana Dretske ddretske@lcfpd.org
Posted by D_Dretske at 2:20 PM 6 comments: