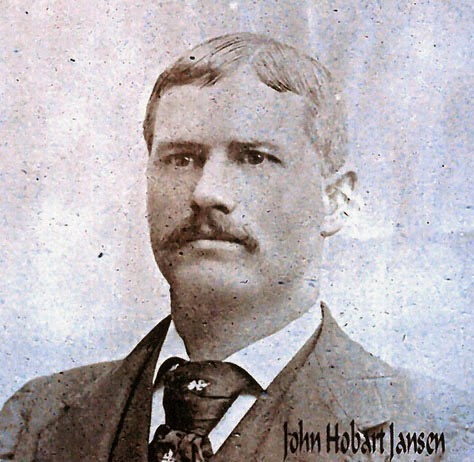 John Hobart Jansen (1861 - 1908) was the first member of the Waukegan Fire Department to die in the line of duty.

The son of Prussian immigrants, John was born near Milwaukee, Wisconsin, and worked on his family's farm. When he was about 23 years old, he left the farm to work as a lineman for the Milwaukee phone company, and two years later became a fireman with the Milwaukee Fire Department as a "truckman" on hook and ladder #2.

In 1892, John married Jenny Van Arnam. About 1902, John and Jenny and their four children moved to Waukegan. John took a job as the manager of the the Chicago Telephone Company's Waukegan branch. While working for the phone company, he also volunteered as a fireman for the Waukegan Fire Department.
At 11 p.m. on April 22, 1908, while heading from his job at the phone company, Jansen heard the alarm for a fire at the North Shore Electric Company. Instead of continuing home, Jansen turned around to assist his fellow firemen. 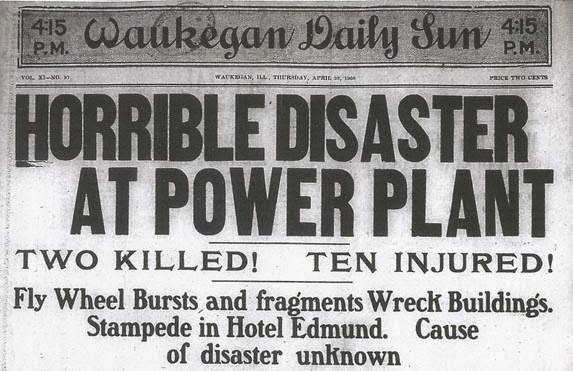 When the firemen arrived at the plant on Spring Street they found that "the belt on the big fly wheel was burning, that the interior of the plant had caught fire, and that the fly wheel was running wild."

Jansen was "aiding in bringing more hose to the firemen fighting the flames" when the drive wheel burst. "Jansen was picked up bodily by a huge fragment and carried through both walls of the Waukegan Ice Company building where his body was picked up bleeding and terribly mangled." He was rushed toward the Jane McAlister Hospital on North Avenue, but died en route.

Also killed was merchant policeman, Joseph Paddock (1879 - 1908). Paddock had been "standing with his back up against the wall of the Phil Sheridan saloon when one of the monstrous spokes of the giant wheel came crashing through both walls of the Waukegan Ice Company plant and felled him."

According to the papers, scores of locals gathered to watch the fire even though they were warned of the danger. "Fragments of the flying iron and steel filled the air and littered the ground."

On Saturday, April 25, the funeral service for Jansen was held at his residence on North Avenue. The house was packed with mourners, including family, friends, members of the Waukegan Fire Department and other area fire departments, mayor and city councilmen, and Odd Fellows. The city had never seen such a large procession, despite the downpour of rain.

In 1908, efforts were made to raise funds to create a monument to Jansen, but it would take nearly 100 years before a memorial was made. On a sunny day in May 2005, the Waukegan Fire Department honored John Hobart Jansen with a memorial plaque.


Special thanks to Thomas and Kenneth Jansen for generously sharing the family's history and research.

The running and fitness craze of the 1970s, and the popularity of Olympic champion Bruce Jenner, led to the creation of the "Bruce Jenner Physical Fitness Trail" at Lakewood Forest Preserve in Wauconda.

Named in honor of Olympic decathlon champion Bruce Jenner, the trail was dedicated on Wednesday, October 5, 1977. Jenner was on hand to cut the ribbon.
The trail was designed by the Lake County Forest Preserves' landscape architect, Janie Brown, and built in part by the Youth Conservation Corps and CETA. It consisted of 20 exercise stations along a one-mile wooded, jogging trail off Shelter E road at Lakewood Forest Preserve.


The Forest Preserve District was following a growing trend across the country for "proper physical conditioning." It was felt that the Preserves' land and the "great beauty of the Illinois landscape" was ideally suited for "low-keyed, individualistic forms of recreation."

The "running boom" of the 1970s is credited to the excitement of the 1972 gold medal win of American marathon runner, Frank Shorter. At the time, marathons weren't as well known or understood by the public, but Shorter's dramatic finish sparked a sensation for marathons and fitness that has continued to grow.

The Forest Preserves' jogging and exercise trail was developed to be adaptable to various ages and physical conditions, and provided both "physical conditioning and enjoyment of the out-of-doors."

Although The Herald newspaper reported that the appearance of the exercise stations "looks a little like a medieval torture chamber, with its chains, ropes and strange-looking apparatus," the fitness trail proved to be quite popular with folks from around the county.

A wood-chip path winding through a hilly wooded area led joggers to stations that in some cases resembled a playground or obstacle course. Included in the activities: a tire run, rope ladder, climbing wall, and balance beam.

Bruce Jenner was scheduled to speak at the College of Lake County about his Olympic training regimen and the 1976 Olympic competition. Following his gold medal win, Jenner began a new career covering sports for ABC with appearances on "Good Morning America."


Jenner, who was much admired as an all-around athlete and extremely well-liked, became a sought after motivational speaker. He was also very accommodating to the many requests he received for personal appearances. Since he would be in the area to speak at CLC, the trail opening was arranged for the same day and Jenner graciously agreed to be on hand.

In 1978, the Forest Preserves received a special award from the Illinois Chapter of the American Society of Landscape Architects for the design of the trail.

In recent years, the fitness trail apparatus have been removed.

Posted by Diana Dretske at 11:43 AM No comments: