This is the second post on the five men pictured together in a Civil War era tintype in the museum's collection.

Born in Oxfordshire, England, William immigrated to the United States with his family in 1853. They landed at Boston and came directly to Newport Township, Lake County, Illinois. The Henry Lewin farm was located on either side of the Des Plaines River in today's Sterling Lake Forest Preserve. 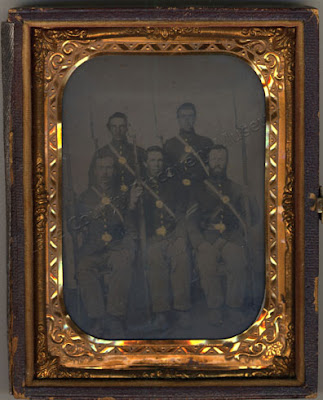 According to Edward Murray's memoir, a group of five farmer-neighbors from Newport Township (shown in the photograph above) went together to Waukegan on September 2, 1862, as recruits in the 96th Illinois Regiment. They were assigned to Company C, which became the regimental Color Guard. The photo was more than likely taken in October 1862 to commemorate this comradeship while they were encamped at Camp Fuller, Rockford, Illinois, where the men trained and were given their uniforms, guns and accoutrements. 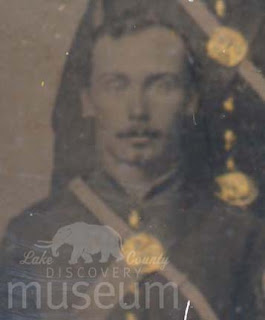 William Lewin experienced more than his share of misfortune in the war. At the Battle of Chickamauga, Georgia on September 18 - 20, 1863, he suffered a "long, raking shot on the shoulder and back, but rejoined the Regiment next day."

On December 11, 1863, Lewin wrote to his friend, David Minto (formerly of Company C) in Millburn, Illinois: "We marched from Lookout Mountain the 2nd of this month and reached there the 3rd we are about 9 miles from Bridgport near the Chattanooga Railroad we had a pretty hard time taking the Mountain charging over rocks and logs and climbing the hill and driving the rebels from their entrenchments."

Lewin went on to tell his friend that "after fighting hard all day we lay at night upon our Arms with a rubber [sheet] only for covering and at daybreak in the morning we found the enemy had evacuated. Our regiment and the 8th Kentucky ascended the mountain with ladders and took possession in this engagement our regiment lost 15 wounded and 1 killed." 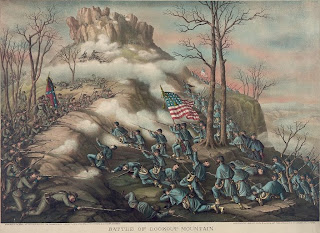 An 1889 lithograph of the Battle of Lookout Mountain (November 24, 1863) by Kurz & Allison. Courtesy of Library of Congress.

Less than a year later, Lewin was taken prisoner during the Battle of Resaca, Georgia on May 14, 1864.

According to the Regimental history: "First Sergeant Joseph B. Leekley of Company F, Corporal Wm Lewin and Orange M. Ayers of Company C took a slightly wrong direction in the retreat, and emerging upon the road found themselves prisoners. Leekley and Ayers afterward died in prison, and Lewin reached home only at the close of the war."

Lewin and about thirty comrades were marched for several days. "We were persuaded by bayonets to accept seats in a freight car for that prison, above all other prisons, recorded as having no parallel in the world's history." Here, Lewin is referring to the notorious Andersonville prison.

Many histories have been written describing the horrific conditions at this prison. Lewin also attested to the meager rations, poor water supply, lack of shelter, and that no clothing or cooking utensils were furnished.

“The scurvy had so contracted my limbs as to make it impossible for me to walk but a few steps at a time, and caused me severe pain." A Confederate physician informed him that a large potato eaten raw "would prolong a person's life a month." On this information, Lewin traded his pocket watch (which he had managed to keep) for 7 1/2 dozen potatoes and two biscuits. "Very quickly we partook of raw scraped potato."

After Union General William Tecumseh Sherman captured Atlanta, Georgia, Confederate Generals feared that he would liberate Union prisoners held in camps in southern Georgia. Prisoners were moved to locations out of Sherman’s path. Thousands, including William Lewin, were sent to South Carolina as preparations began on a new prison at Florence.

By February 1865, Lewin was in a very low state with "swamp fever." Fortunately, he and his comrades were paroled from Florence on February 28th. They boarded a freight train and were met near Wilmington, North Carolina by General Schofield. The army had a celebration planned for the men--a band played popular tunes, and fellow Union soldiers held signs: "Thrice welcome, comrades," and "Home again."

"We were overjoyed to be... under the folds of the dear old flag." The former prisoners-of-war received clothing, food and two months' pay.

Lewin mustered out in Springfield, Illinois on May 24, 1865.

William Lewin from the 96th Illinois Regimental history, 1887. (above)

William Lewin returned to Lake County where he married Susan P. Heath in 1871 and settled in Russell. There he became a prosperous farmer and respected veterinarian.

Posted by Diana Dretske at 4:28 PM

First Seargeant Joseph B. Leekley mentioned is this piece is my great great grandfather (on my father's side -- his mother was J.B Leekley's granddaughter). I am disappointed that he is not among those in the photograph as I have not been able to locate any photographs of him. He died in Andersonville prison.

Since he was from Dubuque, Iowa, and buried at Council Hill, Illinois, it's possible a local museum may have a photo of your g-g-grandfather. I will email you contact information separately.

In case you didn't get my email to search for a photo of your g-g-grandfather, contact:

I just found your page Diana.It is nicely done. My great great grandfather George Johnson of Wauconda fought with the 96th and was in Company C. He later transferredd to the 21st Illinois along with a few friends when the regiment was being reorganized. We have lost all the pictures and he was illiterate so no letters. All I have is oral history. He was 40 years old when he enlisted and his wife tried to talk him out of it but he said he had waited as long as he could but Abe needed him and he was going. Or so the story goes. He was a private and planned on staying a private and keeping his head down. He said when they got to Chickamauga they were just sitting around listening to the fight when finally thye were sent word they needed to march. They covered many miles but when they arrived it was "hot" the term my great uncle used to describe the situation. It was early afternoon and it was smoky and the rebs were on em before they even got set...He and his friend fought side by side. It was real close fighting in the brush. They were the last unit to withdraw and some of the company were captured but he and his friend (I forgot the name but he was English also, George was from Linconshire)I have been trying to find out more and asked the Waucounda folks whether the archives from the GAR organization in Waucounda were saved. George was active in a veterans group. I am planning on a visit to Chickamauga battlefield and hope to be able to see the spot where company c fought.

I was unable to confirm that your great grandfather George Johnson fought with the 96th Illinois at the Battle of Chickamauga.

According to the 96th's Regimental History, and the Illinois State Archives Civil War muster rolls, George enlisted with the 96th on March 22, 1865. Nearly two years after Chickamauga.

Please email me at ddretske@LCFPD.org and I will send you the relevant documents for your review.

Thanks so much for reading!

Thank you so much for posting this information. William Lewin is my great-great-grandfather. We have learned a lot about him, but I had never seen this picture before. I would love to read the rest of the letter you mentioned that he wrote to his friend. Has it been posted anywhere on this site? My daughter and I are planning a trip to Andersonville, and were are trying to collect as many details as possible before we go.
Thanks again,
Margie Queen

Please email me at my museum addy and I can provide you with much more information on your g-g-grandfather.

Thank you for posting this very interesting letter, Diane. I have been researching the Leekley family for many years now.(I am related to the Leekleys on my mother's side). As far as I know there are no surviving photos of Joseph B. Leekley. There is however a very interesting letter he wrote to his wife. The original letter in housed at the IL State Historical Library. I was curator at Galena History Museum in Galena, and we have no photos of JB Leekley there. Kathy Hernandez- feel free to contact me at my Google addy robertsuwplatt@ for info. about JB being buried 3 times. He was moved to his final resting place at Greenwood cemetery after being moved from Andersonville to Council Hill's Grant Hill Burying Ground. Diana, I would also like to see the whole letter. I will email you for it. Thank you!

Hello, I had not been on this website since I first found it 2 years ago, and I am thrilled to see your responses concerning my civil war Leekley grandfather! I have a photo copy of the letter that Tracey mentioned. My father gave all of us children copies decades ago after he donated the original to the IL state museum. And I have a copy of the letter he was sent from the museum thanking him for his contribution. Thank you, Kathy Hernandez

Hi, I found a picture online of the 96th regiment mustering in in Waukegan IL. The picture I found was very poor quality. Was wondering if there was a high resolution available and if the people in the photograph are labeled. Found the picture here:

Are you referring to the tintype of the five soldiers in the Wm. Lewin post? The men's names are listed in the caption.

Images in the museum's collections are available at a higher resolution for a fee. The fee is dependent on the end use. If for personal/non-publication use the fee is $20 for a 300 dpi scan.

Hello I meant the picture that's in your blog post here (members of the 96th Regiment being mustered in in Waukegan) http://lakecountyhistory.blogspot.com/2011/04/lake-county-in-civil-war.html?m=1

Could William B Lewin be in this photo too?

It's possible, but none of the men are identified. This photo was likely taken at the end of the war when the men were mustering out and returning home. William B. Lewin mustered out May 24, 1865.

This is great information. Thank you. I am looking for any Civil War military records for two members of Company B, 96th Illinois Volunteer Infantry: