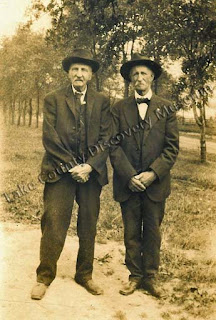 Left to right: Civil War veterans Silas S. Nichols (145th Ohio) and Frederick Worth (96th Illinois), photographed by teacher Lee Riley in May 1918.  The veterans are standing on the Townline School grounds at the northwest corner of Yorkhouse and Delany Road in Newport Township. (Dunn Museum 2011.0.226)

Silas Nichols was born in Sandusky, Ohio, to Joshaway and Shirley Nichols. He enlisted in the 145th Ohio Infantry, Company I at its organization on May 12, 1864. This Ohio National Guard unit enlisted for 100 days service.

Under Colonel Henry C. Ashwell, the 145th Ohio immediately proceeded to Washington, D.C. where it performed garrison duty. In July 1864, when Confederate General Early threatened Washington, the Regiment was constantly under arms. It mustered out on August 23, 1864.

While in D.C. with the regiment, Nichols saw President Lincoln three times. On one occasion, Nichols and several fellow soldiers called on the President at the White House. Lincoln came to his office door to welcome them and shook Nichols' hand.

On each Memorial Day from 1925 - 1942, Nichols recited the Gettysburg Address at the service in the Waukegan courthouse square. He continued to attend the memorial service, placing a wreath at the Soldiers and Sailors Monument until 1944. Nichols also participated in the procession of "boys in blue" each year in Chicago on Michigan Avenue. 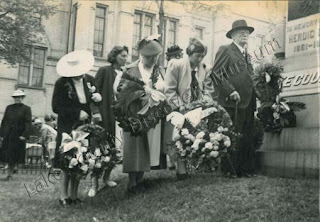 On Memorial Day 1944, Silas Nichols (right) placed a wreath
at the Soldiers and Sailors Monument in the courthouse square,
Waukegan. (Dunn Museum 94.34.278)

Silas and Elizabeth Nichols were married for 71 years. They were feted as the longest married couple in Lake County. They credited their happy marriage to "independence for both husband and wife and plenty of give and take." 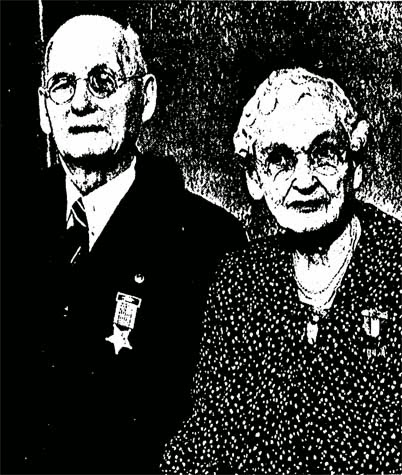 Silas and Elizabeth Nichols on their 70th wedding anniversary.
Photo from the Chicago Tribune, March 7, 1943.

While Silas was active in the Grand Army of the Republic as commander of the Waukegan post and judge advocate of the Illinois GAR, Elizabeth devoted herself to the GAR's Women's Relief Corps.

Each time a Civil War veteran passed away it made the papers. The Chicago Tribune was one of many area newspapers that covered Nichols' death on January 10, 1945.

In 1953, the last verified combat veteran of the Civil War, James A. Hard (1843 - 1953) died; and drummer boy Albert Woolson (1847 - 1956) was the last veteran of the Civil War. After Woolson's death the Grand Army of the Republic was dissolved, since he was its last member. At least three men died after Woolson claiming to be Confederate veterans, but their status was debunked. 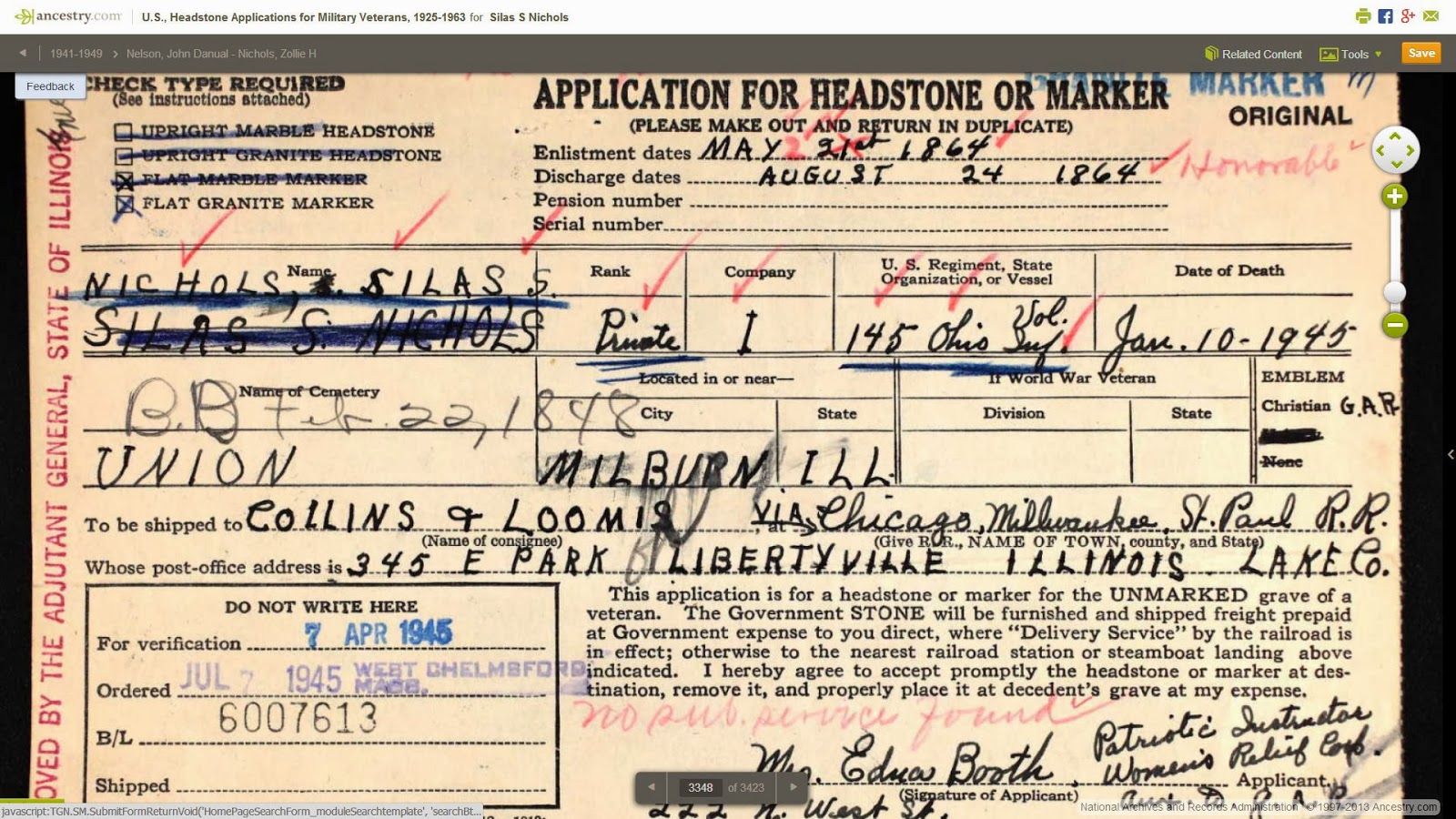 In 1945, the Women's Relief Corps applied for a military headstone for Nichols.
The application (above) was approved by the Adjutant General of Illinois.

Carved at the bottom of Silas and Elizabeth Nichols' shared tombstone are the words: "He shook the hand of Lincoln."

Last year marked the 100th anniversary of the Girl Scouts of America (1912-2012), which were formed in Savanna, Georgia by Juliette Gordon Low. To celebrate, let's take a look at Girl Scout items in the museum's collections.
Above is the earliest Girl Scout photo in the museum's Lake County collections. This photo of Dorothy Gleiser (1913 - 2003) of the Thistle Troop of Lake Forest was taken at Brae Burn Farm where her father was the farm manager, and her family lived. 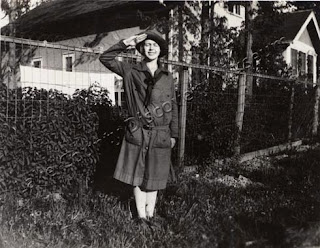 This 1926 photo shows Dorothy Gleiser wearing another Girl Scout uniform. The uniform pictured was donated by Dorothy to the museum in 1987.  LCDM M-87.3.1 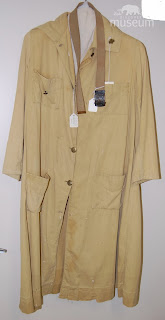 Dorothy Gleiser's 1926 Girl Scout uniform (above). This is a typical button-down-the-front coat dress uniform of the early 1920s. LCDM 87.3.1 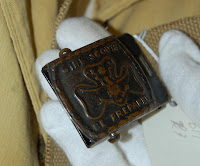 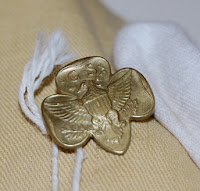 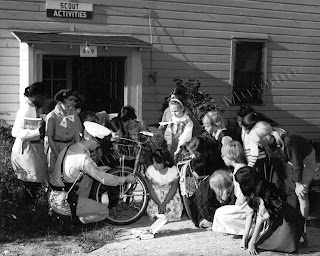 The photo (above) was taken in 1965 at Fort Sheridan. The caption reads: "Sergeant George Stacey of 204th Military Police Company shows members of a Fort Sheridan Girl Scout Troop how to affix reflector-type safety tape to their bicycles." LCDM 92.24.731 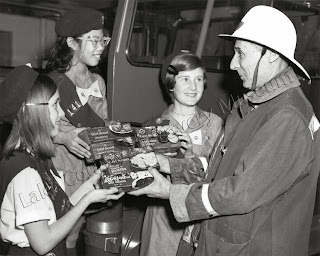 Cookies are probably the first thing that comes to mind for most people when they think of the Girl Scouts. Here, members of the Fort Sheridan Troop sell cookies to an unidentified fireman, 1970. The sale of cookies as a way to finance troop activities began as early as 1917 with members baking the cookies themselves. LCDM  92.24.737 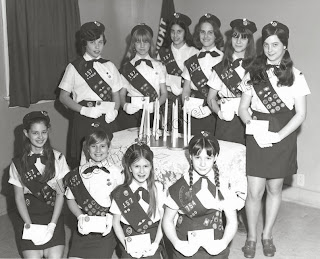 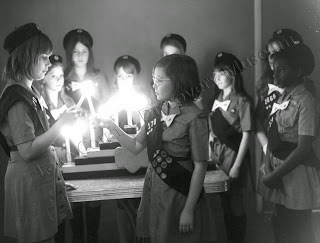 Each year on February 22 the Girl Scouts celebrate World Thinking Day in which the girls participate in activities and projects with global themes to honor their sister Girl Guides and Girl Scouts in other countries.