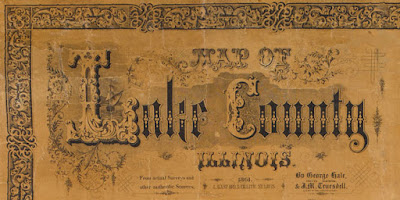 The Lake County, Illinois map of 1861 was the county's second official map. An earlier map was commissioned by the County in about 1845, but no copies are known to exist.

Lithographers Leopold Gast and Brother of St. Louis, Missouri were hired to publish the Lake County map. By 1861, the American map making industry was in full swing. The lithographic process was more cost effective than copperplate engraving, allowing lithographic map publishers to make good maps at a low cost, even in small publishing runs.

To ensure the map's accuracy, the surveys of County Surveyor, George Hale, were used along with the records of the Clerk of the Circuit Court/Recorder of Deeds, Josiah M. Truesdell. The map was a useful resource for farmers, businessmen and government officials. 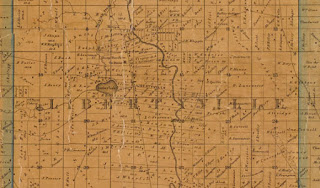 As an historical record, the map is a snapshot of Lake County’s agricultural heritage, and settlement and immigration patterns prior to the start of the Civil War (1861 - 1865). In 1860, Lake County's population was 18,257.

An original 1861 map in the collections of the Bess Bower Dunn Museum was in need of conservation. A grant from the Signal Hill Daughters of the American Revolution funded the map's conservation by the Book Restoration Company of Kenosha, Wisconsin. 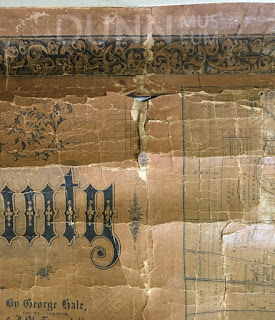 Detail of the 1861 Lake County map before conservation.

The paper map had significant cracks, flaking, and the shellac coating had aged to a dark color. Its conservation treatment included, but was not limited to soaking the map in milk alkaline solution to relax flat, de-acidification, removal of shellac varnish, and mounting map pieces onto okawara paper and then onto Irish linen.

After conservation, the map is now stable and able to be exhibited for short periods of time. 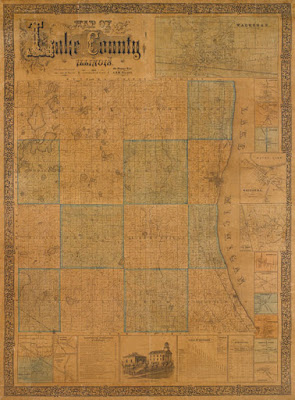 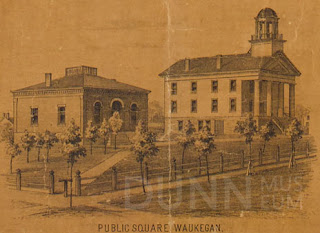 Similar to county atlases that included artist's renderings of farms, and county histories with biographical sketches of prominent citizens, the 1861 wall map promoted the county's civic pride and was a useful source for finding ownership of parcels of land.

Today, the 1861 Lake County map is considered an invaluable genealogical and historical record.

Special thanks to the Signal Hill Daughters of the American Revolution for funding the conservation of the Dunn Museum's 1861 Map of Lake County.