Caught up in patriotic fervor to preserve the Union, George P. Shatswell enlisted with the 15th Illinois Infantry in May 1861. When Shatswell left Waukegan, he was a strong young farmer, but on his return he could barely do a day's work.
George Shatswell was born in Avon Township, Lake County, Illinois on March 23, 1842. His parents, Richard Shatswell and Margaret Sluman, had migrated from Massachusetts in 1840, and were among Avon Township's earliest settlers. In 1846, the family re-settled in Waukegan Township.
In the summer of 1859, a seventeen-year old George Shatswell went to work on Allen Spaulding's 140-acre farm. The farm was located on the east side of Greenbay Road just south of Blanchard Road in Waukegan, Illinois.
The relationship Shatswell and Spaulding forged would create a lifelong bond. 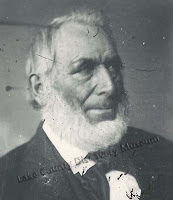 Allen Spaulding (1807 - 1901), circa 1880. Dunn Museum 2011.0.124
Allen Spaulding and his wife, Hannah Hinkston, were among the first settlers to Waukegan Township. They came from Oneida County, New York in 1839. (Hannah's sister—Fanny Hinkston Bacon—was featured in a previous post). Allen and Hannah had three daughters living at home: Sarah Jane (born 1839), Mary (born 1842) and Julia Ann (born 1845).
In 1860, Shatswell again worked for Spaulding during the summer. He probably would have spent a third summer working there if not for the world-changing events of the spring of 1861. News of the fall of Fort Sumter and the start of the Civil War ignited a fierce patriotism in George. He became one of the first young men in Lake County to respond to President Lincoln's call for troops
George enlisted with the 15th Illinois Infantry, and mustered in at Freeport, Illinois on May 29, 1861.
Heading to war with dreams of crushing the Rebellion were soon dashed when Shatswell contracted typhoid pneumonia in October 1861.
Shatswell was sent to the Sister of Charity's Hospital in St. Louis, Missouri. After two months, he was ordered to Benton Barracks, a Union Army military encampment. There, Shatswell "became so disgusted with treatment and quarters" that he rejoined his regiment without having fully recovered. 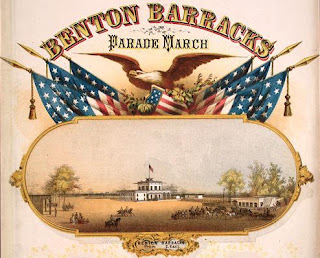 Benton Barracks, St. Louis, 1862. A. McLean Lithograph
George fought at the Battle of Shiloh April 6 - 7, 1862, until his "strength failed." Captain John S. Pratt ordered him to the hospital boat, and gave him his presentation sword for safekeeping.

Captain John S. Pratt (1837 - 1920), Company I, 15th Illinois Infantry
Instead of reporting to the hospital, Shatswell traded Pratt's sword to an Iowa soldier for a gun and accoutrements. Shatswell then "hunted up" his company, and "did all I could to thin the rebel ranks till the end of the battle."
After the battle, Shatswell's health declined and he was sent to hospital. Like so many soldiers who contracted camp disease and other ailments, Shatswell's health issues would cast a long shadow on the remainder of his life. (Disease caused more deaths in the Civil War than battles).
In June 1862, Shatswell was given 20 days furlough to go home to recover. When he arrived back in Lake County, his father and siblings did not recognize him because he had lost so much weight.
In Waukegan, a doctor recommended extending his leave, but George insisted on returning to his regiment. The following year, he fought in the Siege of Vicksburg, May 18 - July 4, 1863. 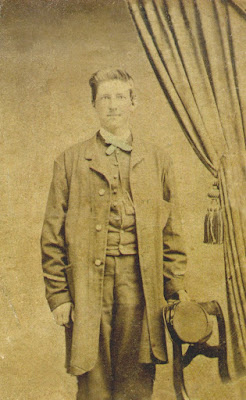 George P. Shatswell in his 15th Illinois uniform, circa 1864. Ancestry.com
In January 1864, George was joined in the 15th Illinois by his father Richard and brother William. The men remained with the regiment until they were captured at Ackworth, Georgia on October 4, 1864. They were sent to Andersonville Prison. 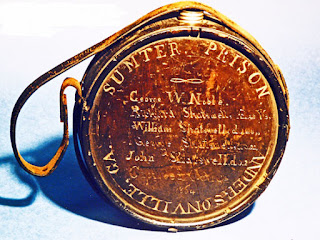 Confederate Canteen used by Richard Shatswell, his sons William,George and John,
and comrade George W. Noble while prisoners at Andersonville (Fort Sumter). Ancestry.com.
In George's words, they "starved for six months and fifteen days." Fortunately, the Shatswell men survived and were paroled at war's end.
Ever industrious, before George mustered out on May 30, 1865, he secured a position at the grocery store of J.H. Porter in Waukegan. He worked there until June 1866 when he left for Washington, D.C. to "settle with the Gov't" where E.B. French, Auditor of the U.S. Treasury, "made mine a special claim."
Shatswell then made his way to California where the dry, warm climate did his health good. He settled in Yuba County, California (north of Sacramento) and worked as a shipping clerk for Walker Moore and Company.
In May 1867, he received a letter from Allen Spaulding, reviving the connection they had formed years before.
To George's delight, Spaulding asked him to return to Waukegan to "take charge of his farm." And offered to "give [George] his daughter to help manage" the farm. 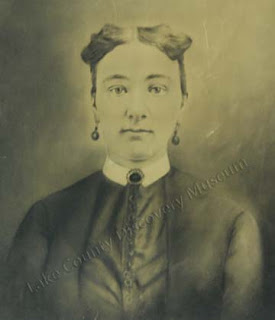 Portrait in charcoal of Julia Ann Spaulding Shatswell (1845 - 1893), circa 1867.
Dunn Museum 57.2.5
The daughter in question was Julia Ann, known as "Ann," who had been sixteen the last summer George worked on the Spaulding farm. Apparently, Ann was amenable to this arrangement or it is doubtful her father would have suggested it.
George later recalled: "I accepted the invitation (who wouldn't)."

George Shatswell's description of events, in his own hand, leading to his return to Waukegan in 1867.
(Original filed at Lake County Clerk's office, Waukegan)
With the death of his son in the war, Allen Spaulding faced a dilemma. He was 60-years old, and had no son to take over the family farm. Clearly, his impression and rapport with George Shatswell led him to the decision to create a stronger bond by having George marry his daughter Ann and take over the farm operations.
George Shatswell arrived home on June 10, 1867, and he and Ann were married on June 18.
Unfortunately, George's war-related health issues returned. "The strain proved too severe for my constitution. My lungs began to trouble me again worse than before... I was completely prostrated and put under the treatment of Dr. John Row Bullock of Waukegan. I was not able to perform any manual labor for about a year."
George and Ann's first child was born in July 1869. The joy of the birth of their son Fredrick was overshadowed by George's continued ailments. In the fall of 1869, Dr. Bullock advised George to "go west and get away from the Lake region."
George headed to Grand Island, Nebraska and settled on a Homestead Act claim. It is assumed that he brought Ann and their baby boy with him. 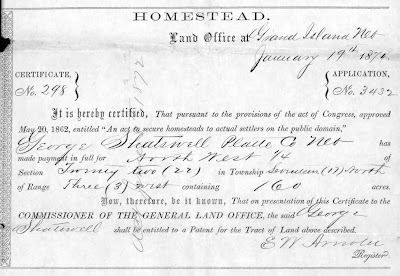 Homestead certificate of eligibility for veteran George Shatswell, Grand Island, Nebraska, 1874. Fold3.com
George's health improved enough for him to labor on his farm in the summer months. He could "not endure outdoor work in winter" and found a position teaching school. By the summer of 1873, he had given up on his farm and rented it. In the spring of 1876, he went back to work on his farm, telling Ann: "I would stick to it till she planted my bones on the hill."
George and Ann continued their lives on the Nebraska farm until Ann's mother, Hannah Hinkston Spaulding, died in fall 1878. With Allen Spaulding alone on the Waukegan farm, George and Ann were called back to Illinois to "superintend" the farm.
The couple and their young family lived with Allen Spaulding on the farm. In 1879, Allen Spaulding married his wife's older sister, Onor Hinkston.
Shatswell was only able to work on the Waukegan farm in the summer "about half the time" and "in the winter keeping pretty close to the house."
In 1884, he applied for a veteran's disability pension from the U.S. Government, stating that: "I did not apply for a pension before... because I did not wish to embarrass the Government until it was abundantly able to pay me what I consider I am justly entitled to. The time has now arrived."
George's forthright statement made under oath before the county clerk in Waukegan was sent to the Pension Office in Washington, D.C.. In his summation George wrote: "If you think I am not entitled to a pension after this statement of what I endured to save this grand Nation from ruin and destruction, please give me a situation in your department and I will be satisfied."
Indeed, he did become a "pension claim agent," advocating for veterans, and a Justice of the Peace. He was also active in the Grand Army of the Republic, Waukegan Post No. 374, including serving as its commander.
George and Ann had three children: Frederick (b. 1866), Nellie (b.1875), and Hattie (b.1877).
Ann passed away on February 17, 1893. On October 6, 1904, George died suddenly while in Burnett, Wisconsin.
Sources:
Posted by Diana Dretske at 11:41 AM 2 comments: