The village of Millburn in north Lake County is on the National Register of Historic Places for its wonderful historic buildings. The location is also significant for one of its early settlers--William Buffham (1801-1871). 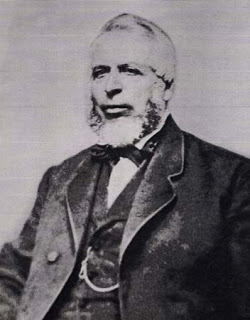 Buffham was born in London, England and became interested in mechanical devices at an early age. He came to Millburn with his wife and six children in 1850 and set up an optical instrument shop. Buffham may have been attracted to Millburn by the fact that it was settled by English and Scottish immigrants, and had a reputation as a hot-bed of abolitionism and intellectual activity. His mother's family in England had been active in abolition and prison reform.

Buffham is noteworthy for being a maker of optical and astronomical equipment at a time when there were only a few manufacturers of scientific instruments in the United States. While three of his sons worked the family's 140-acre farm, William and his eldest son, William Sharpe made microscopes and telescopes. 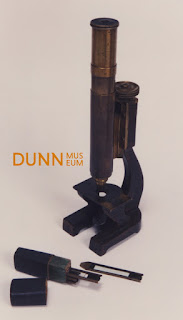 Microscope made by William Buffham in 1842. Photo by Mark Wallenfang/Shooting Start Studio (BBDM 97.26.3)

The microscope made by Buffham while still living in England in 1842 was played with by his great-great grandchildren. They did not realize its significance until they reached adulthood. 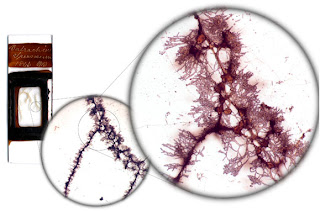 Buffham also made a collection of biological slides to view on his microscope, and built a cabinet for the slides. Shown is one of Buffham's glass slides of an algae specimen made in 1846. The enlargement of the algae (shown in circles) was made by Baxter Healthcare for the museum. 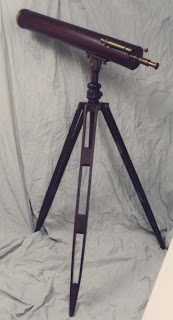 Around 1855, Buffham made a Gregorian telescope. This type of telescope used a concave mirror that inverted the image to allow direct observation of terrestrial objects. Buffham's descendants had been unaware of his manufacturing telescopes until one was found by an antiques dealer out east in the 1990s. 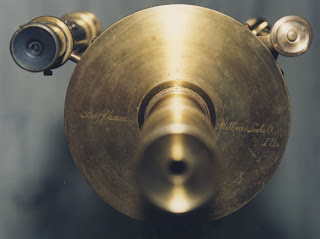 The Buffhams moved to Racine, Wisconsin in 1868 when his eldest son bought a painting business there.

Buffham continued to make microscopes and optical instruments in Racine, presumably until his death in 1871. 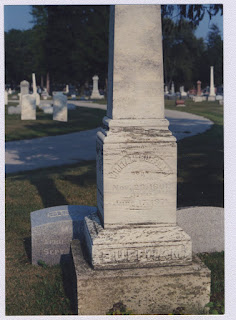 
Tree nurseries for landscaping purposes were an important agricultural crop in Lake County as early as the 1840s. The earliest known nursery was Thomas Payne's in Fremont Township, established in 1841. Within a decade, Payne had 100,000 trees in his inventory, including Norway spruce and apple varieties. 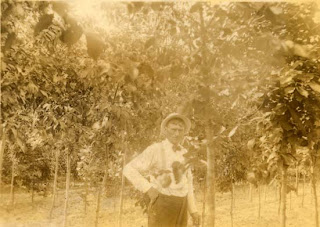 One of the best known nurseries on the North Shore was the Clavey Nursery of Highland Park, founded in 1885 by Frederick Clavey. Later the company was known as Ravinia Nurseries. F.D. Clavey is shown (above) in his nursery, circa 1910.

Clavey started his business by selling trees off farm lots. To Clavey, the best trees came from fields where cattle had nibbled on them making them trimmed and bushy. 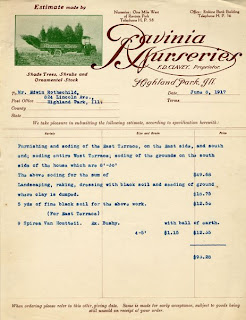 This estimate (above) for work at the Rothschild home in Highland Park includes extensive sodding and the planting of nine spireas all for less than $100. 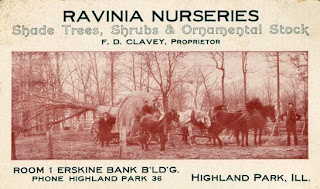 Trees were dug by hand and transported by horsedrawn wagon. Clavey wasn't just a nurseryman, he was a landscaper, too. 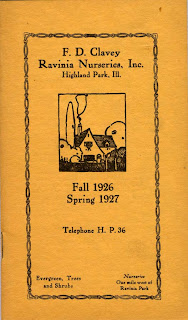 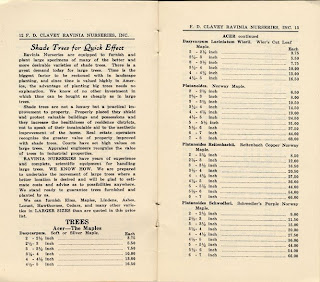 Page views from the catalogue. (above)

A 1923 advertisement for the nursery stated: "Trees selected with care as to variety and placed with relation to the house and views, give a feeling of quietness and an appearance of permanency to home grounds." 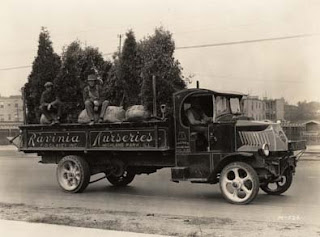 The ad went on to detail the nursery's growing practices: "Trees in our nurseries are planted far apart so as to develop a good top, and are frequently transplanted so as to produce a fine root system of fibrous roots. Because of this our extra-large size trees will transplant successfully and obviate years of waiting for their shade and proper effect." 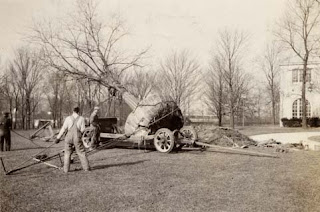 Large tree for "immediate effect" being planted at a North Shore estate, circa 1930. 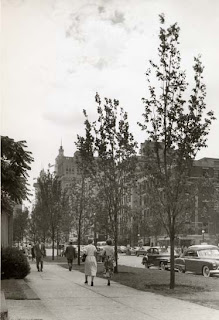 In the late 1950s, the nursery provided trees to beautify Michigan Avenue in Chicago (left). The Clavey's also planted the ivy for the now famous "ivy wall" at Wrighley Field.

By 1970, Ravinia Nurseries' was headquartered in Lake Villa, selling evergreens, trees, shrubs and vines. They have since gone out of business.
Posted by D_Dretske at 2:13 PM 2 comments:


In 1951, Ronald Mason was driving a bakery delivery truck on the north side of Waukegan when he spotted an animal horn in the road. The horn had carvings on it, and though it was interesting, Mason just kept it on a shelf and occasionally drank beer from it.

In the early 1960s, an acquaintance of Mason's met Dr. O.G. Landsverk who identified the piece as being a "Viking horn." According to Landsverk, the carvings on the horn depicted ancient Norse gods and legends. The horn became known as the "Waukegan Horn" and members of the Leif Erickson Society felt it could prove that Vikings had explored the St. Lawrence River and traveled through the Great Lakes.

No, this is not an April Fool's joke.

The buzz about the horn continued into the 1980s when it was sent to the University of Arizona in Tuscon for Carbon 14 dating. You may recall that this same university also had the privilege of dating the Shroud of Turin.

Everyone was convinced the horn would pre-date Christopher Columbus's voyages of the 1400s. As it turned out, the bovine horn was dated to about 1920, and was probably carved by a Swedish immigrant to Lake County.

Though that may have been a let down for many, it did heighten awareness of Scandanavian immigration to this region. Swedish immigration began en masse to the United States in the 1840s, and in earnest by the end of the 1860s due to a series of famines in Sweden. The fertile farmland of the Midwest became the destination for many of these Swedes.

As a child, my knowledge of the area's Scandanavian heritage was limited, but represents some of my favorite memories. For instance, my favorite local landmark was the giant Viking ship constructed in a guy's backyard next to the Shirl's Drive-In on Washington Street in Waukegan. It was awesome with its classic dragon head and one of the reasons why I loved going to Shirl's. We'd get our soft serve ice cream cone and look at the ship from the Shirl's parking lot. 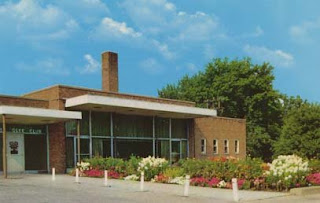 Another favorite spot was the Swedish Glee Club located at 621 Belvidere Street, and shown here in a Curt Teich postcard from 1957.

The Waukegan based Swedish Glee Club had its roots in 1892 when Hjalmar Fredbeck formed a Swedish quartet. In 1905, the quartet expanded to a chorus and became known as the “Swedish Glee Club.” By the 1950s, the club had its own building for performances and dinners, and became popular with not only Swedes, but also the surrounding communities.

My Irish grandfather was a member of the Glee Club. They had terrific dinners and the building was very open and full of light from its large windows. When we went there, my grandfather had to present his membership card before the door would open to let us in. What an experience!

There was also the Independent Order of the Vikings who bought property on Deep Lake to build a recreation center, but decided the site was too difficult to get to from Chicago. They then purchased property from David Beidler off “old” Grand Avenue in Gurnee in 1912. The Gurnee property was adjacent to the railroad line. The Vikings held annual picnics at this location, drawing upwards of 18,000 Swedish-Americans from the Chicago area. Below is a photo of the Viking Club House from the collections of the Warren Township Historical Society. 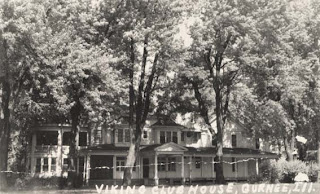 Also, at this location from 1925 to 1967, the Vikings ran a nursing home for Swedish-Americans. The building was sold to the village, then to the Special Education District of Lake County, and finally razed in 1973. Today, the site is owned and operated by the Gurnee Park District as Viking Park--a testament to the Swedish-American organization that once called it home.

So, Vikings in Lake County? Swedish-Americans would certainly agree!
Posted by D_Dretske at 11:20 AM 7 comments: