A New York native and son of Irish immigrants, Gene Tunney began fighting in 1915, and served in combat during World War I, hence his nickname the "Fighting Marine." He started as a light heavyweight, but in 1925 began to concentrate on heavyweight matches.

On September 23, 1926, Tunney defeated the legendary Jack Dempsey (1895-1983) in Philadelphia, PA in a 10-round unanimous decision for the Heavyweight Championship of the World. Not surprisingly, there was great interest when a rematch was announced the following year.

On August 11, 1927, the site for Tunney's training camp for his second fight against Dempsey was officially announced. The location would be Cedar Crest Country Club (aka Cedar Crest Farms). The property located in Lake Villa Township and west of Route 59 on the shore of Fox Lake, was the former estate of coal mine owner and operator, Jackson K. Dering (1870-1925).

The Chicago Tribune reported on August 19, 1927: "the training site is almost 70 miles by motor from Chicago... one of the few places Billy Gibson, manager of Tunney, visited in his quest for a training camp. Gibson asserts it is the most ideal training camp sites he has seen in his thirty years' association with boxing."

Tunney was given a suite of rooms in the main house, and rooms for his invited guests, access to a swimming pool, and two boxing rings. According to the Tribune: "Signs will be posted along the highways directing motorists to the camp. Unlike Dempsey, the champion [Tunney] will work in public and special trains will be run over the Soo line." The Soo Line was the only railroad to the lakes region and Lake Villa. 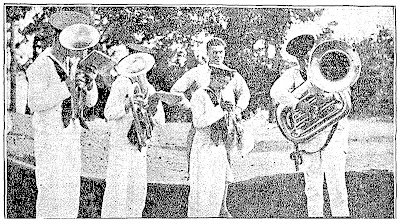 Gene Tunney (in back) listening to a "band of youths" playing on the lawn of Cedar Crest Country Club,
Lake Villa. Chicago Tribune, September 3, 1927.

After some public workouts in front of 4,000 fans and newspaper reporters, Tunney announced that he would begin training in secret. He did, however, work in a total of five exhibition matches at the camp for his fans.

"I have my own ideas of training," Tunney said to the Tribune regarding the secret workouts. "I want to perfect certain punches and I do not want any one to know the style of attack I am going to use against Dempsey."

Jack Dempsey was the most famous boxer of his era, and a cultural icon of the 1920s. He held the World Heavyweight Championship from 1919-1926. The odds makers favored Dempsey to win the rematch.

The Tribune reported that on September 13, Tunney spent the day golfing at the Onwenstia Club in Lake Forest and dining with society friends. His manager Billy Gibson noted that Tunney wasn't sleeping well with noise around the clubhouse and on the Fox Lake shore. Gibson said: "We thought it best for the champion to get away from the camp for a few days and forget all about the fight." 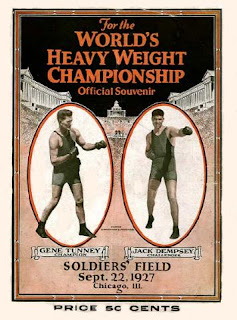 Tunney rode in a bullet proof car protected by two squad cars from Lake Villa to Chicago the day of the fight. It was said that notorious Chicago mobster, Al Capone, was a fan of Jack Dempsey and bet on him to win, fueling rumors that the fight was rigged.

Tunney dominated the fight in rounds one to six, but in the seventh round, Dempsey knocked Tunney to the ground. This was the first time in Tunney's career that he'd been knocked down.

Controversially, the referee did not start counting immediately. Instead, he waited until Dempsey moved to a neutral corner giving Tunney several seconds to recover before the actual count. Because of this delay, it became known as the Long Count Fight. 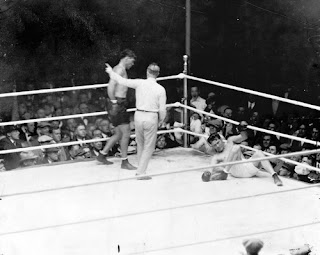 Chicago Tribune photo from the famous Dempsey-Tunney fight, showing Tunney knocked down and the referee trying to move Dempsey to a neutral corner before beginning the 10-second count.

Interestingly, it was Dempsey's camp who had negotiated for a new 10-second count rule for knockdowns for this fight.

Tunney later said he heard the referee at the "two" count and could've gotten up at any point after that, but waited until "nine." Dempsey said he had no reason not to believe Tunney, who then dominated the final two rounds, and won the title by unanimous decision.

Notably, when Tunney knocked Dempsey down in the eighth round, the referee began counting before Tunney moved to a neutral corner.

After the fight, Dempsey lifted Tunney's arm and said, "You were best. You fought a smart fight, kid." 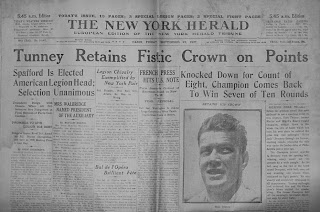 Approximately 15 million people listened to the fight on the radio, but controversy over the fight decision erupted. This was due in large part because a U.S. law prohibited the shipment of boxing movies over state lines. Once the law was repealed and people could see the count for themselves, the controversy dwindled. Tunney's alertness after being knocked down quieted the naysayers.

Perhaps the Washington Post's sports reporter Shirley Povich said it best when he wrote: "Gene Tunney did get up. With the count of nine he rose to his feet a calm, deliberate fighting machine, stunned, but aware, and there Gene Tunney saved the championship."

It was Dempsey's last career fight and Tunney's next to last. Tunney again defended the title successfully against Tom Heeney in 1928. 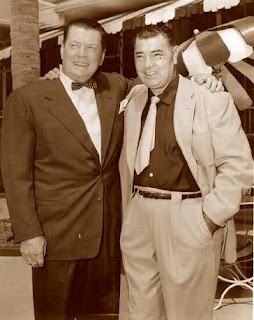 Despite fighting each other in one of the most controversial boxing matches in history, Tunney and Dempsey became good friends.

Posted by Diana Dretske at 4:12 PM No comments: