For museums, an object's story is essential to preserving and telling a community's history. And sometimes an object has more than one story to tell.

Take for instance, "The Bain" wagon donated to the museum in 2011. The wagon's story encompasses that of an immigrant farmer, local dairy industry, and Libertyville and Kenosha businesses. 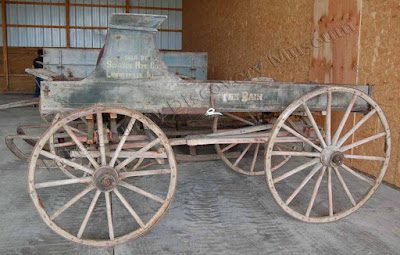 Simon Roppelt (1876 - 1931) was born in Bavaria, Germany to Christian and Margaret Roppelt. In 1893, at the age of 16, Roppelt set sail for a new life in America on the SS Darmstadt. Shortly after his arrival, he settled in Lake County, Illinois.

On October 5, 1900, Roppelt became a naturalized U.S. citizen at the county courthouse in Waukegan. John Hertzing and John Bauer (husband of Margaret Herzing) were his witnesses. Both witnesses were also German immigrants and probably related to Roppelt.

In 1910, Roppelt decided to make the important purchase of a new farm wagon. For many American farmers, the choice was clear: "The Bain" produced by the Bain Wagon Company of Kenosha, Wisconsin. 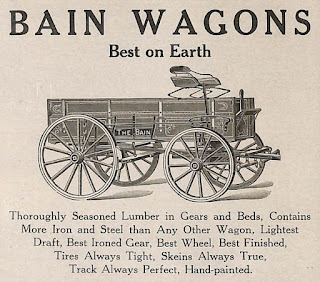 The Bain Wagon Company was one of the most recognized and respected wagon makers in the United States. It began in the late 1830s as Mitchell & Quarles. Edward Bain and George Yule worked for the company. In 1852, Bain took over the Kenosha factory and established the Bain Wagon Company, and promoted Yule to superintendent.

George Yule, had worked his way up from wagon maker in 1842 to president and owner of the Bain Wagon Company in 1911. Yule had emigrated from Aberdeenshire, Scotland to Somers, Wisconsin with his father and siblings in 1840. A number of family members settled in Millburn, Lake County, Illinois, including George's brother James Yule.

For Simon Roppelt, the closest Bain dealer was the Schanck Hardware Co. on Milwaukee Avenue in Libertyville. 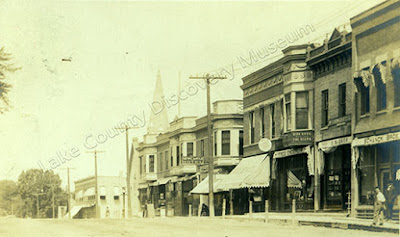 The Schanck Bros. store is at the far right in this circa 1907
photo postcard view of Milwaukee Avenue in Libertyville. The Schanck building
can still be seen today on the northeast corner of Cook and Milwaukee. (M-86.1.649)

Mundelein native, George Schanck (1837-1915), established his hardware store in 1870. The original building burned in Libertyville's fire of 1895. Schanck rebuilt in brick on the same site. 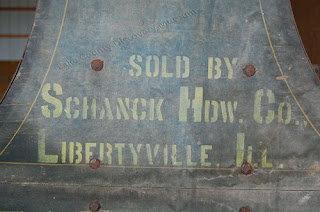 "The Bain" wagon purchased by Simon Roppelt has
advertising for Schanck Hardware painted on the seat.

Like all Bain wagons, Roppelt's came with the company's name stenciled on the side.

The Bain Wagon Company painted its logo
on the side of  "The Bain" wagons.

Simon Roppelt used "The Bain" wagon to haul milk cans to the Soo Line Railroad "milk stop" at Harris Road in Grayslake (today's Prairie Crossing depot) for shipment to Chicago. Milk production was a big industry in Lake County and supplied a growing need for milk in Chicago. Daily "milk trains" took dairy farmers' filled milk cans to Chicago in the morning and returned the emptied cans in the evening. Each farmer had a number that was painted onto the milk can for identification. 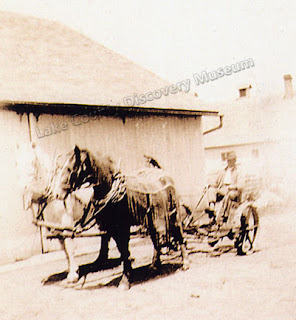 Roppelt's "The Bain" wagon was used from 1910 - 1928. The wagon was never repainted and retains its original color and advertising.

Posted by Diana Dretske at 3:27 PM No comments: