July 26, 2014 marks the 90th anniversary of the grand opening of the Antioch Theatre building in Antioch, Illinois.
The theatre venture was a co-partnership between Lyman B. Grice of Antioch and William C. Bryant of Bristol, Wisconsin. The building, located on the south side of Lake Street, and west of the Opera House, had modern conveniences and seats for 400 patrons. The projected cost of the building was $40,000.
Groundbreaking for the new theatre began on Wednesday, September 26, 1923. Soon after construction began, Grice and Bryant sold a 1/2 interest in the venture to James P. Johnson and Albert L. Fell. Johnson was a local proprietor of a resort hotel and the father of Oliver G. Johnson, who was managing the Majestic Theatre in Antioch.

In January 1924, Oliver G. Johnson announced he was moving his motion picture business (Majestic Theatre) into the new theatre building under construction on Lake Street. Johnson had given up his lease with Barney Naber on Main Street, who would be leasing the former movie house to William Ross for a restaurant. The Majestic Threatre had been in Naber's building since April 27, 1919.

The name of the new theatre under construction was originally proposed as the New Majestic Threatre, but that name was dropped in favor of the Antioch Theatre. Oliver G. Johnson brought in his brother Frank Johnson to co-manage the theatre.

The motto of the Antioch Theatre was "The Public is Right." The first feature presentation was Zane Grey's "The Wanderer of the Wasteland."
The person who was most associated with the success and improvements of the Antioch Theatre was Fred B. Swanson of Antioch. He began managing the facility by December 1925. He remained as manager until May 21, 1941 when he purchased the building, and become sole owner. He also owned other movie houses in the Midwest.

In October 1947, Swanson announced he had completed the remodeling of the Antioch Theatre. The remodeling gave the theatre an additional 100 seats in the balcony.

October 31, 1957, Swanson sold the Antioch Theatre to William Goeway of Antioch. Goeway took control on November 4. He also owned the nearby Lakes Theatre. Goeway planned a new deluxe concession department and extensive remodeling of the theatre.

On May 31, 1962, Goeway sold the Antioch Theatre to Henry C. Rhyan of the Family Outdoor Theater in Grayslake. Goeway moved to Jacksonville, Florida where he intended to continue in the movie business.
The Antioch Theatre is on the cusp of a new life. With the support of the community and the Village of Antioch, Tim Downey (owner) is leading the redevelopment effort.

Special thanks to museum volunteer and researcher, Al Westerman.

Posted by Diana Dretske at 9:35 AM No comments:


William Bonner Jr. was one of thousands of Lake County men to enlist in the Civil War. By the summer of 1862, the war had become synonymous with death and privation, but Bonner heeded President Lincoln's call to preserve the Union.


William was born in Canada on the family's trip over from Scotland. He grew up on the Bonner's Avon Township farm (shown above), working as a farmer. He most likely attended the one-room Dodge School (which his father William Sr. built) on the southeast corner of Sand Lake Road and Route 45.

The 21-year old William was recruited by John K. Pollock of Millburn into Company C of the 96th Illinois Regiment. On September 2nd, Bonner went to Waukegan to formally enlist in Pollock's Company. He most likely shared the wagon ride to Waukegan with other neighborhood enlistees, including George C. Dodge, and Henry Bater, a laborer on the Bonner's farm. After several days of training the regiment went by train to Camp Fuller in Rockford, Illinois for more intensive training before heading to the front.

During a portion of his first year of service, Private Bonner suffered from "camp illness." Soldiers were commonly sick due to poor sanitation, poor nutrition, and being exposed to a multitude of diseases. Several letters from William's comrades in the museum's collections note his ill health:

The 96th Illinois' first battle came at Chickamauga, Georgia on September 18 - 20, 1863. This battle claimed the second highest number of casualties of the war after Gettysburg. (See my post on Chickamauga)

The 96th Illinois lost half its men in one day's fighting on September 20. Bonner and his comrades of Company C were given a "terrible blow" while defending the Union's position on Horseshoe Ridge. Of their 35 men sent into battle, 25 were wounded, and the remaining ten had bullet holes through their clothes and accoutrements.

According to the regimental history, William Bonner Jr. "was shot through the body" in the first charge on Horseshoe Ridge. He was "left upon the field, doubtless dying within a few hours." Bonner did not make it to the field hospital at the rear, but even if he had the wound was fatal.

For many months Bonner's friends and family clung to the hope that he was alive and would be heard from. The Bonners watched the road for any sign of their son's return home.

One of William's comrades, William Lewin of Newport Township, wrote on December 11, 1863, nearly three months after the battle: "I have not seen any one that has seen or heard any thing of Wm Bonner since the battle of Chickamauga." (below)

No news ever came.

On the home front, families often never learned the fate of their loved ones. There was no system to identify the dead, notify families, or compensate them for their loss. William Bonner is one of hundreds of thousands of Civil War soldiers who have remained unidentified and their demise unknown.

On Sunday, July 13 at 10 a.m., the Bonner Family will hold a memorial to honor William Bonner, Jr., whose body was never found. The grave marker dedication is open to the public and will be at the Millburn Cemetery on Millburn Road east of Route 45. 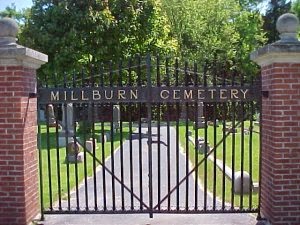