In the mid-1800s, Great Lakes shipping was key to the economic boom of the newly settled Midwest. Port cities big and small, such as Chicago, Milwaukee, Waukegan and Kenosha thrived from abundant commerce and growing populations. Farmers shipped produce to market via the lakes, and settlers and businesses benefited from shipments of lumber and goods.

In 1835, brothers, Hanson, Robert and John Minskey headed west from Baltimore, Maryland on horseback to Lake County, Illinois. They were part of the westward migration into the Midwest, following the opening of the Erie Canal and treaties with Native American tribes. (see my post on the Treaty of Chicago).

The Minskey brothers grew up in Baltimore near shipyards and amid a vibrant trade culture, and understood the economic potential of the Great Lakes. Hanson Minskey (1809 - 1881), who had been in the U.S. Navy, wanted to pursue a career as a ship's captain. 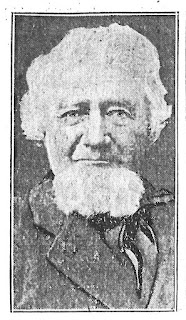 Hanson and Charlotte purchased 90 acres on the northwest corner of today's Sheridan Road and Route 173 in Zion. Though Hanson's occupation was as a sailor, the family had additional income from farming the land.

Beginning in the early 1840s, Hanson Minskey became a ship builder in Waukegan, and a ship's captain. While Hanson pursued a career on the lakes, brother Robert settled down to farming, and brother John returned to Baltimore. The family's history notes Robert also being a sailor, but no supporting information could be found. Robert's son, George J. Minskey (1846 - 1930) was a sailor and ship's captain. 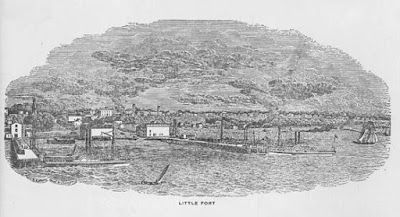 In 1848, Minskey became the captain of the newly built two-masted schooner, the James McKay. The ship's home port was Waukegan, where there was a considerable business in ship building. The ship was named in honor of one of its owners, Scottish-immigrant James McKay, who was a businessman and county sheriff. (see my post on James McKay). 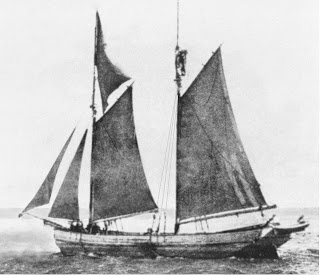 Two-masted schooner representative of ships Minskey captained on the Great Lakes.
In the 19th century, schooners were the workhorse of Great Lakes commercial shipping. 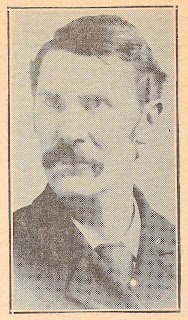 In 1867, at twelve-years old, Samuel began sailing the Great Lakes. Initially, he accompanied his father on voyages to Manitowoc and Milwaukee, Wisconsin, transporting goods.

Samuel Minskey was captain of the schooners: Gazelle (1879), Delos DeWolf (1892), and Magnetic (1905). These were the ships and dates found with an association to Samuel Minskey. 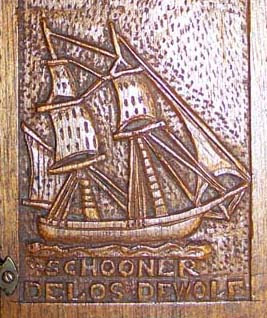 Captain Samuel N. Minskey sailed the schooner Delos DeWolf in 1892.
This rare sailor's folk art of the Delos DeWolf (found online) was used for the cover of
"The American Cruisers Own Book." Kahn Fine Antiques and Works of Art website.

In 1892, Samuel's ship brought the first load of paving bricks to upgrade Genesee Street in Waukegan from a dirt road to a paved road.

In 1902, while captaining a ship in the Gulf of Mexico, Samuel's wife Emma and their eight-year old son Lauren joined him. The family nearly lost their lives when the ship went down, presumably due to an accident. They were saved by a "hair's breath," but the ship and its' contents were lost. After this experience, it is not surprising that son Lauren, did not follow his father or grandfather into a life of sailing. 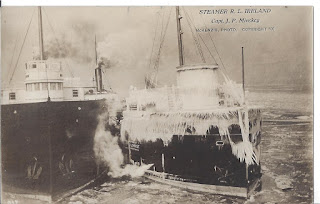 Sailing on the Great Lakes in the 19th century was dangerous work. Each captain and his crew had to know the location of every island, barrier, and lighthouse. When storms approached they had very little time to find safe harbor before being bombarded by powerful winds and the quick succession of waves.

Navigating a schooner took years of experience to master. The epitaph of "master mariner" on Samuel Minskey's gravemarker was a testament to his accomplishment. 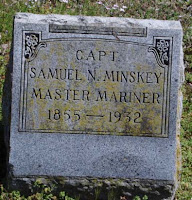 Life on the open waters—away from home for months at a time—with cold, wind, rain and ice battering the ship and its crew, took its toll on sailors.

After four decades on the lakes, Captain Hanson Minskey's health had deteriorated. He retired in 1878, and he and his wife sold their farm and moved to Waukegan. In an effort to regain his health, in 1880, Hanson removed to Wharton County, Texas. Texas had become known for health resorts that attracted "lungers," people with weak lungs or tuberculosis.

The following spring, Hanson sent for his wife and sister to join him in Texas. Charlotte was suffering from "paralysis of the brain," a 19th century term often used for cerebral palsy.

Sadly, the new climate was not enough to restore their health. Charlotte died on September 19, 1881, followed by a grief-stricken Hanson on September 21. Two days later, Hanson's sister Harriet died. Their remains were brought back to Waukegan for burial at Oakwood Cemetery.

Four generations of Minskeys were found to have sailed the Great Lakes from the 1840s to 1930s: Hanson Minskey, sons Jed and Samuel, nephew George, and great grandson Jeremiah J. Minskey. 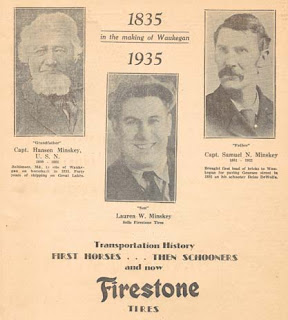 Captain Minskey's patent log was donated to the Dunn Museum by Samuel's son Lauren, who survived the sinking of his father's ship in 1902. The patent log is on exhibit in the Museum's "An American Frontier" gallery.