One of the perks of the museum being at Lakewood Forest Preserve is that everyday I get to enjoy wildlife and the change in seasons. Today is no exception. It's a lovely autumn day here in northeastern Illinois, and I got to pet a donkey!

Okay, donkeys are not normally part of the wildlife at Lakewood, but this weekend they are! Its the annaul Farm Heritage Festival, and with all the tractors coming in to be displayed, it seemed like the perfect time to share some farming images from the archives. 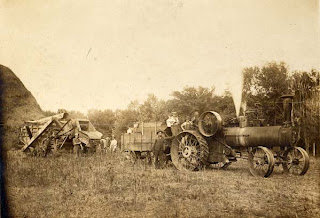 This beautifully photographed threshing scene is identified only as "Trashing Lake Co." We may never know where the scene was photographed, but it is a good representation of a once familiar sight. 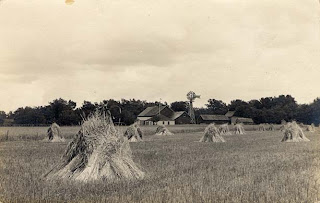 Many locals ran resort businesses or had jobs in town in addition to operating a family farm. This spectacular photo postcard taken by C.R. Childs in 1913 shows a harvested field, and Setler's Resort, Antioch, in the background. 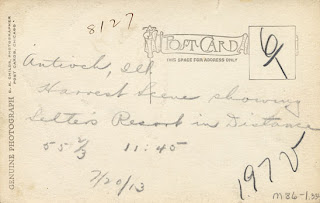 The reverse side of the postcard has Childs' handwritten notes, which include a potential caption, the time of day "11:45," and date "7/20/13" the photo was taken. 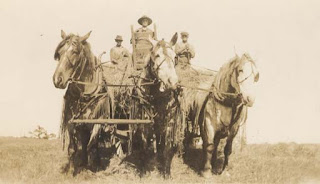 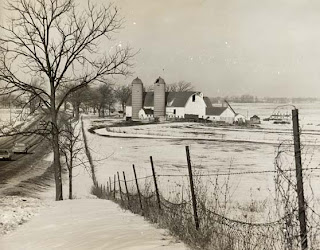 Scenes like this one at the corner of Fairfield and Gilmer Road are few and far between these days. Burnett Farm, circa 1973. 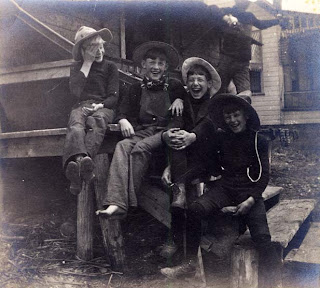 Remember, all work and no play makes Jack a dull boy. Obviously, these farm boys photographed by Bess Dunn about 1910, got the message!
Posted by D_Dretske at 2:45 PM 1 comment: 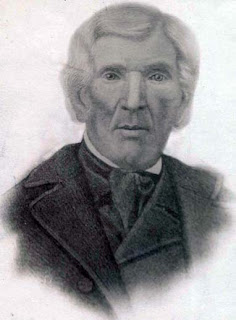 Daniel Wright (1778-1873) is considered Lake County's first settler. I like to qualify that further by saying he is the county's first permanent non-native settler. The distinction is important, since native peoples lived in this region for thousands of years, and French and British fur traders were seasonal inhabitants from about the mid-1600s.

Wright was born in Rutland, Vermont in 1778. He was a farmer and served in the War of 1812. Although he was known as "Captain" he served in the war as a Lieutenant with the 1st Rifle Company, 3rd Regiment of the Vermont Militia.


In 1814, he moved his family to Ohio, and in 1832 began to explore land in Illinois. Rumors of good, cheap farm land led Wright to Fort Dearborn (later known as Chicago) where trappers told him of good hunting along the Des Plaines River near what would become Half Day (later Lincolnshire).

Wright was the first of the American newcomers to stay year-round in what would become Lake County, Illinois. Though many of the county's history books note that Wright arrived in 1834, in a letter to the Waukegan Weekly Gazette in 1868, Wright stated that "the native tribe of Potawatomi... helped me raise my first rude log cabin in June 1833."

This public statement is significant when put into the context that the Spring 1833 date puts Wright's arrival prior to the signing of the Treaty of Chicago on September 26, 1833. In this treaty, signed between the U.S. Government and the United Nation of Chippewa, Ottawa and Potawatomi Indians, the tribes relinquished their last tracts of Great Lakes’ land, and the land was opened to non-native settlement. Accordingly, the trickle of settlers began in the spring of 1834. 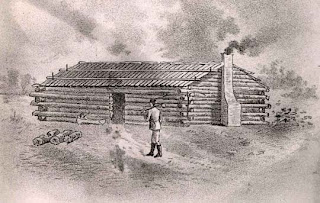 Shown here is an artist's rendering of Wright's cabin. Wright stated that in the fall of 1833, a prairie fire swept through the area burning his crop of hay and forcing his family to find shelter along the Des Plaines River bank. Fortunately, the cabin was unharmed since it had been built with green timber.

Wright never purchased the land he settled on, but his grandson, William Whigham, did. Wright farmed the land along the Des Plaines River until his death in 1873. 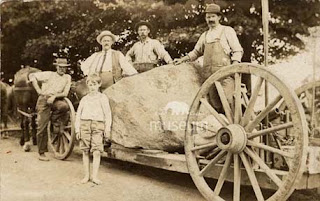 In 1909, the Lake County Historical Society placed a memorial rock near the intersection of Milwaukee Avenue (Route 21) and Aptakisic Road just west of the Des Plaines River where Wright had settled.

The rock was from the site of today's St. Mary's of the Lake Seminary in Mundelein, and taken by wagon on dirt roads to Half Day by the Bairstow Company of Waukegan. 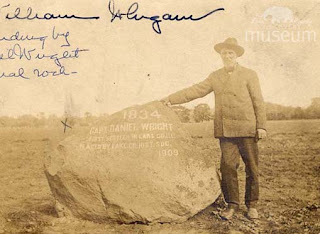 William Whigham, Wright's grandson, was photographed with the memorial rock about 1909. You will notice that the date carved into the rock to honor Wright's arrival is 1834. Hence, the continued confusion about when he arrived in Half Day.

The "X" marked in ink on the photograph on the left side of the rock, denotes the location of Wright's cabin. In his golden years, Wright lived with his grandson in a woodframe house on the southwest corner of Milwaukee Avenue and Aptakisic Road, now the site of a commercial development. 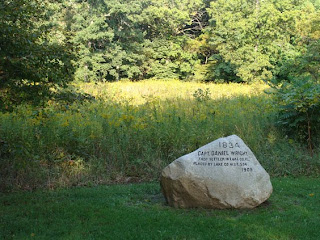 In 1996, the Illinois Department of Transporation determined that the rock needed to be removed from the road right-of-way. They contacted the Lake County Discovery Museum to assist with finding an appropriate location. The Friends of Ryerson Woods and the Lake County Forest Preserve District agreed that the rock should be placed on public land where it could be enjoyed by all. With this in mind, and the fact that much of the land now preserved in the Ryerson Conservation Area was once owned by Wright's descendants, Ryerson Woods was chosen as the location. Photo of the Daniel Wright memorial rock at the Ryerson Conservation Area.
Posted by D_Dretske at 12:58 PM 9 comments:

During the depression of the mid-1890s, there was a rise in the number of communitarian groups throughout the United States. American utopianism was nothing new. A rash of these groups had formed in the 1830s and 1840s, and many more following the Civil War. Yet, one small group stood out at the end of the nineteenth century—Jacob Beilhart's Spirit Fruit Society—which eventually settled in Ingleside, Illinois. 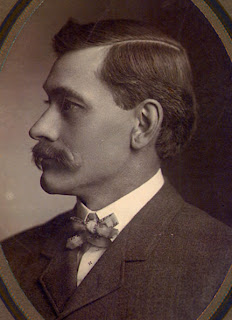 The charismatic Jacob Beilhart (1867 - 1908) was born on a farm in Columbiana County, Ohio. This portrait was taken in 1904 for the Cincinnati Enquirer. (Collections of the Lisbon (Ohio) Historical Society)

The Spirit Fruit Society is considered by some to be the longest lived utopian society in the United States, existing from 1899 to 1930.

Though raised as a "fire and brimstone" Lutheran, Jacob's search for truth lead him to faith healing and the possibilities of mental suggestion and self-sacrifice. "Spirit Fruit" was Jacob's view of "true life" for the "tangible fruit of the Universal Spirit."

Jacob's message included the importance of doing good works; the teachings of Jesus, who represented the perfect, unselfish man; the glorification of "female qualities"; and the need for marriage reform. Unlike other founders of communitarian groups, Jacob made no attempt to attract converts. He also allowed his members to come and go as they pleased—some staying permanently while others only visited for days or months.

Jacob's promotion of "free love" gave him the most trouble, and was decades ahead of what Americans were ready to accept. His "free love" philosophy included the right for consenting adults to change partners, but not have more than one partner at a time, and was tolerant of homosexuality. The intent was to create an atmosphere of tolerance, not one of promiscuity. However, this lifestyle brought negative attention on the Society, and forced Jacob out of Lisbon, Ohio and into the big city of Chicago where his message was more tolerated. 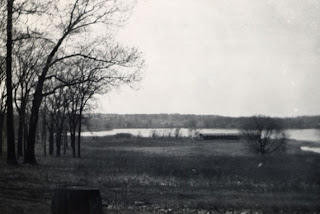 By 1905, the Spirit Fruit Society was able to buy property near Ingleside along Wooster Lake. The 90-acre site was perfect for farming, beautifully situated on the lake, and was close enough to Chicago that Jacob could preach there and interested individuals (including journalists) could ride the train out to the Society's farm. View of Wooster Lake from the front steps of the Society's Temple. 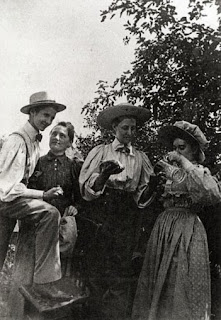 There were never more than two dozen members at a time, and they were very devoted to Jacob's beliefs, especially the notion that the human spirit could attain health and peace called "Universal Life" through a strong work ethic.

Shown here are several of the original members of the Spirit Fruit Society. From left to right: Virginia Moore (in men's clothing) who was Jacob's lover, Lou Beilhart (Jacob's wife), Mary Beilhart (Jacob's sister), and an unidentified woman, circa 1898. Lou seemingly tolerated Jacob's affair, but eventually left him, although they never legally divorced. Photo courtesy of H. Roger Grant.

The members built by hand their home along Wooster Lake, which they called the "Spirit Fruit Temple." It was a 60 x 80 foot cement block structure complete with personal space for each member. Both men and women members dug by hand tons of gravel from the west bank of the lake, and hauled 500 loads of it "across the ice on sleds in very cold weather" to build their dream.

In 1908, the unthinkable happened. Jacob "took sick" with acute appendicitis. Though a doctor from Waukegan was brought in to operate, peritonitis set in, and Jacob died three days later. In keeping with the simplicity of "Universal Life," his followers placed his body in a homemade oak casket and buried him in an unmarked grave. The site of Jacob's grave is now inaccessible on private property.

Despite this great loss the colony continued. Perhaps this fact more than any other makes the Spirit Fruit group unique. Historically, communitarian experiments headed by a single individual dissolved if anything happened to that leader. The Spirit Fruit Society remained in Ingleside until 1914, and for unclear reasons headed west to California where they bought an abandoned olive grove property near Los Gatos. The Society's membership dwindled, and the final blow came in 1930 when Virginia Moore died of cancer. 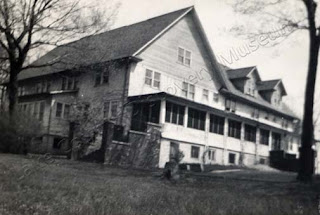 The Society's Temple in Ingleside was "rebuilt" in the early 1940s and became the Wooster Lake Health Resort (above) —a non-sectarian health clinic which offered "the profession and the public the most accepted and approved hospital equipment" available. (Dunn Museum 91.20.9) 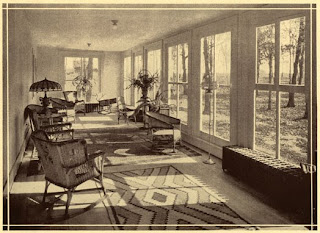 Above is one of the rooms featured in the health resort's promotional booklet, circa 1945.

In 1995, the former Temple and sanitarium burned to the ground. It had been vacant for years. The site has since been developed as a residential subdivision.

Physically, very little remains of the Spirit Fruit Society. Remnants of the Temple in Ingleside were collected by the Bess Bower Dunn Museum (formerly Lake County Discovery Museum), and photographs and other documentation were donated to the museum by the former caretakers of the site. But the utopian Society's success is evident in terms of its longevity, the personal growth of its members, and that the group achieved its goal of "practicing goodness and thoughtfulness and turning the other cheek."

For an in-depth look at Jacob Beilhart and his Spirit Fruit Society, I recommend H. Roger Grant's book Spirit Fruit: A Gentle Utopia.
Posted by D_Dretske at 12:25 PM 12 comments: