On July 14, 1918, a homeless terrier on the streets of Paris, France was rescued by two American soldiers of the First Infantry Division. Named Rags, the dog became a war hero and mascot, and spent two years living at Fort Sheridan. 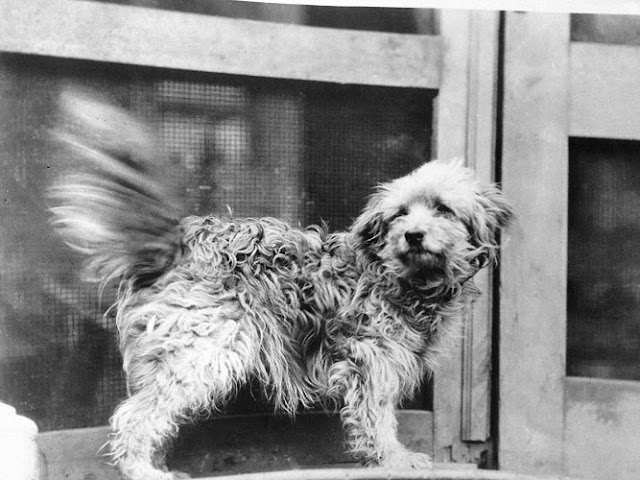 Late on that Bastille Day evening—one hundred years ago—soldiers Jimmy Donovan and George Hickman bumped into a stray dog on their way out of a cafe. The men gave the little dog a scrap of food and pat on the head, and the smart little terrier took a chance and followed Donovan down the street and into history.

Moments later, Donovan was picked up by Military Police for staying out past curfew. On the spot, he scooped up the dog and named him "Rags," claiming he had been sent to find the division's mascot. Rags charmed the MPs and was allowed to return to camp with Donovan. 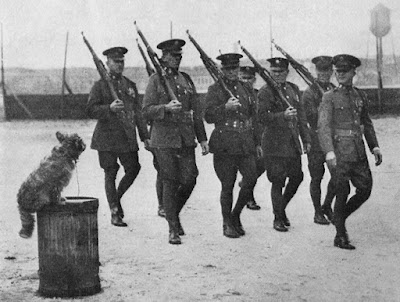 Rags loved soldiers and was trained by Donovan to salute them on parade. Courtesy of Grant Hayter-Menzies.

Just four days later, the French terrier—now officially the First Division's mascot—was on his way to the war front with his new companion. Animals were key in the war effort for transportation, to convey messages and to track the enemy. Donovan taught Rags to salute soldiers on parade and utilized him for carrying messages. On his own, Rags learned how to find damaged communications wire that Donovan, as a member of the Signal Corps, repaired.

At the Battle of Soissons, July 18 - 22, 1918, Rags and Donovan along with 42 infantrymen were surrounded by Germans. Donovan attached a message to Rags's collar and sent him off to military command, which resulted in an artillery barrage and reinforcements who rescued them. News that Rags had saved the day spread through the division.

At Soissons, France, Rags began to make a name for himself as a "war dog." Soissons in ruins by William L. King, 1919. Library of Congress.

Rags and Donovan participated in the final American campaign of the war, the Meuse-Argonne Offensive, which began on September 26, 1918. This was the largest American-run offensive and the bloodiest operation of World War I for the American Expeditionary Force.

On October 2, Rags carried a message across the battlefield amid falling bombs and poison gas. The swift delivery resulted in an artillery bombardment leading to the capture of the Very-Epinonville Road, and saved the lives of American soldiers.

Days later, on October 9, Rags and Donovan were caught in heavy enemy shellfire. Rags was injured on his right front paw, right ear and right eye from shell splinters and he suffered effects of gassing. Donovan was also seriously wounded and the two were taken to a field hospital together. Rags's health improved quickly, though he lost sight in his right eye. While Donovan convalesced, Rags was allowed to stay under his cot and was occasionally placed next to Donovan on the cot.

Donovan suffered from a severe case of mustard gas poisoning, which damaged his lungs. The best care for him would be at the U.S. Army post at Fort Sheridan, Illinois, where the hospital staff specialized in the treatment of gas and shell-shocked patients. 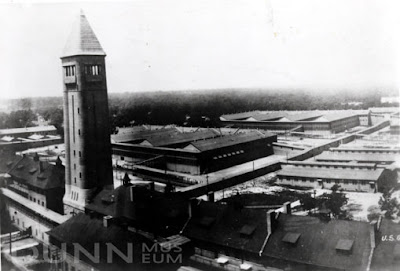 During the journey from France to Fort Sheridan, Donovan and Rags were separated due to military procedures, but many compassionate individuals ensured the two would be reunited, including Col. Halstead Dorey. Colonel Dorey had recognized Rags as the "little hero of the Argonne campaign," and smuggled Rags onto the hospital ship in one of his bags. Animals were not allowed for fear of contagion, and were euthanized if found.

Jimmy Donovan and Rags arrived at Fort Sheridan in late 1918. Donovan settled into one of the wards at Hospital No. 28, later re-designated Lovell General Hospital. Rags was allowed into the hospital once medical staff realized he was no ordinary dog, but a war hero. Rags visited Donovan daily, which did wonders for both their morale. 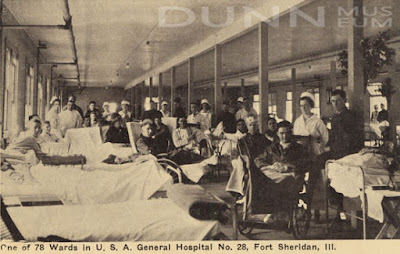 Postcard view of a ward at the Fort Sheridan hospital, similar to the one where Rags visited Donovan. BBDM 92.24.236

When Rags was not at Donovan's side he was exploring the fort. He soon sniffed out the best mess halls where cooks would feed him. He also found lodging at the post's fire station.

Fort Sheridan's fire station where Rags lived, shown here circa 1919. BBDM 92.24.361
The building (with an addition) is now a private residence.

Despite the care of the hospital's highly skilled staff, Donovan died, leaving Rags without his closest companion.

Donovan had been concerned about who would look after Rags. Thankfully, Rags had become a celebrity at the fort. His brave deeds had followed him from the battlefront and many took pride in having such a unique war hero in their midst.

Rags had spent so much time charming new acquaintances that he had become the "post dog." He also became attached to Major Raymond W. Hardenbergh, his wife Helen, and their daughters, Helen and Susan. Rags moved into the Major's bungalow at Fort Sheridan, which became his first true home.

The family quickly learned that Rags loved sweets, playing with the major's daughters and wandering the fort, but hated loud noises. Apparently, he was shell-shocked like so many of the veterans at the fort's hospital.

When Major Hardenbergh received orders for his new post, his wife and daughters gained the support of the fort community for bringing Rags with them. After all, they had given Rags his first home and, "It wasn't fair to make him homeless again." 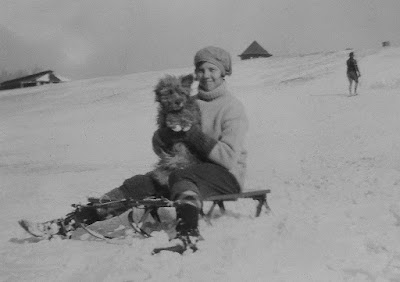 First Division Rags lived out his remaining years as a member of the Hardenbergh family. His war scars and fame followed him wherever he went.

Though Rags was one of millions of dogs, horses and other animals utilized during World War I as "military mascots," Rags had endeared himself to a generation of soldiers. 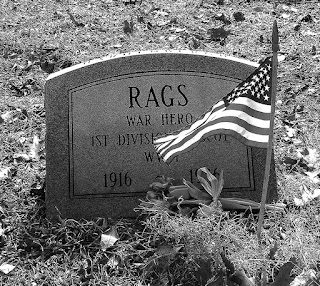 Rags saved the lives of innumerable American soldiers, and was a companion to Jimmy Donovan and the men of the First Division. Because of his bravery and the respect soldiers had for him, Rags was smuggled to the United States where he would live for eighteen years to the delight of the Hardenbergh family and thousands of men and women stationed at Fort Sheridan and army posts throughout the U.S. 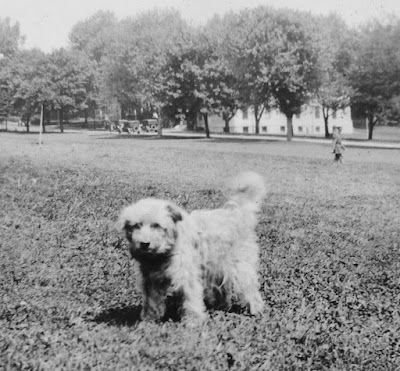 Rags at Governors Island, circa 1929. Courtesy of Grant Hayter-Menzies.

For the full story of this remarkable war hero, read From Stray Dog to World War I Hero: The Paris Terrier Who Joined the First Division, by Grant Hayter-Menzies. 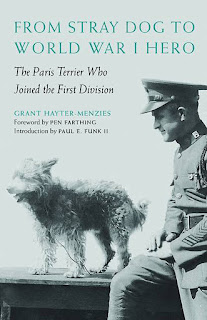