The Elm Theater was located at Liberty (Route 176) and Mill Streets in Wauconda. It opened in 1950 with seating for 610 people, and parking for 125 cars. 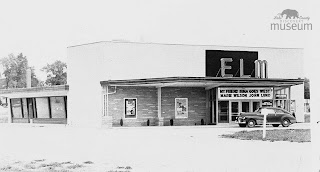 Photo of the Elm Theater taken in 1950, the year the theater opened. This image was used by the Teich Company for their Wauconda large letter postcard (below). Teich Archives OCH1780. 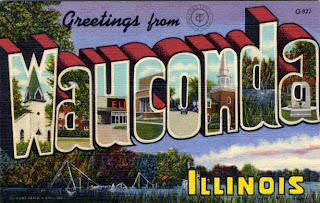 Through the 1950s and 1960s, the theater's movie listings appeared regularly in the Daily Herald.

In 1967, Transfiguration Catholic Church purchased the theater. Church officials bought the property because they feared "purchase by others would hinder the expansion program of the church."

Initially, the theater was staffed by church members who volunteered as ushers and cashiers. Later, the church leased it to Leonard Deasey, whose children and their friends worked the concessions and ticket booth. 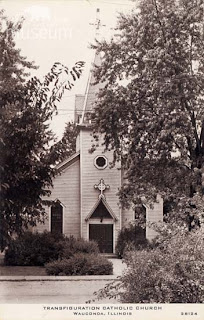 Because of the church's control, the content of the movies shown changed. Many parents were pleased that only movies permitted under the National Legion of Decency Code were shown.

Established in 1933, the National Legion of Decency was an organization dedicated to identifying and combating objectionable content in motion pictures, from the point of view of the Roman Catholic Church in the United States. For several decades, the Legion wielded great power in the American motion picture industry.

In 1984, the theater was torn down. The reason given for razing it was that Transfiguration "could no longer subsidize it." The new church was built on this site. 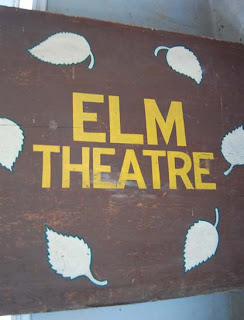 Earlier this year, an original sign from the Elm Theater (above) was donated by Glen Halverson to the Lake County Discovery Museum. LCDM 2012.4.


There are at least ten place names in Lake County attributed to the Irish.

Some of the earliest Irish place names were surnames given to an area by settlers. Meehan's Settlement, for example, was located in today's West Deerfield Township along Telegraph Road, approximately one-mile south of Everett. In 1835, the location was settled by Michael Meehan (1808-1892) and his wife Bridget (nee Monahan), from County Meath, Ireland.

Dulanty was located on Greenbay Road on the Shields-Deerfield Township line (and sometimes referred to as an early name for Lake Bluff). In 1837, Michael Dulanty (1799-1886) and his wife Ellen (nee Armstrong), arrived from County Tipperary, Ireland. They established a stage relay station and tavern known as the Centerville Inn or Dulanty's.

The area became officially known as Dulanty in 1846, when the post office took that name. It was common for post offices to be named for the postmaster, since the post office was located in their home or place of business.

Leahy Hill in Newport Township is located south of Wadsworth Road and east of Cashmore Road. It was named after the Leahy family, Irish settlers, who owned the land.

The place name Kennedy appears to have been used in southern Shields Township in the area where Irish immigrant, John Kennedy,  settled.

Two locales in Lake County were named for the high percentage of Irish who settled there: Irish Hills in  Newport Township, and Ireland in Libertyville/Vernon Townships. Irish Hills was named for the settlers and the hilly topography in the area west of Route 41 along Route 173; and Ireland was the region east of and adjacent to the Des Plaines River. These names were commonly used in the late 19th and early 20th centuries.

Though Killarney Lake no longer exists, the name suggests an Irish connection. The "lake" was a marshy area once located in Antioch Township, west of Fox Lake, in Section 35.   The area was most likely drained for development and farming.

The only Irish-influenced place names still in use are O'Plaine and Blarney Island. O'Plaine is derived from Aux Plains River, an early appellation of the Des Plaines River. Irish settlers reportedly changed the spelling of Aux Plains to O'Plain, and through the 1870s, the river was listed on maps as the O'Plain River. Today, the name is preserved in O'Plaine Road, with the addition of  an "e" on the end.

Blarney Island was named by Irish immigrant, Jack O'Connor, who took over the famous bar on Grassy Lake in the 1920s.

The most anecdotal of the county's Irish place names is Codfish Town. This name described an Irish settlement in Lake Forest near Washington Road. The name seems to have originated in the mid to late 1800s from the smell of codfish cooking on Friday evenings. Residents in the area were also referred to as "codfishers." 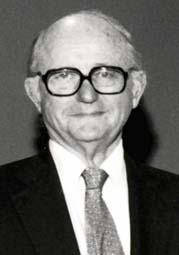 Internationally known artist, Franklin McMahon, passed away on March 3. In his own words, he was an "artist-reporter" always in pursuit of history with his sketch pad and artists' pencils in hand.

McMahon lived in Lake Forest, but traveled the world to cover events that would be recognized as key moments in  American and world history. McMahon went on assignment for Life and Look Magazines, The New York Times, Chicago Tribune, and Sports Illustrated, to name a few. Those assignments included the Emmet Till trial in Alabama, the March from Selma to Montgomery, the Chicago 8 Conspiracy Trial, the Watergate hearings, and the first walk on the moon (drawn from inside NASA's Mission Control).


In 1959, McMahon got word about a meeting to discuss the integration of a proposed subdivision in Deerfield. Since the meeting was at a local elementary school near his home, he decided to attend (though not on assignment). That evening he made nine drawings, which are now part of the museum's permanent collections.

I had the great privilege of spending an afternoon with Franklin McMahon a couple of years ago. We looked at dozens of his drawings, so numerous and beautiful that I was overwhelmed by his talent. Perhaps even more impressive were the memories he shared. He remembered making every sketch, and told the story of how he came to be in that place, sometimes at risk of bodily harm. Hearing about these experiences gave me a new perspective on American history.

McMahon produced 8,000 to 9,000 drawings in his career. He was an eyewitness to history, and his artworks evoke the emotions of those times.