A Century of Wolf Hunts

The American frontier of northeastern Illinois posed many challenges for settlers leaving behind established communities in the eastern United States and Europe. Here they faced the task of forging a new life in a land they perceived as "wilderness."

One of the greatest threats in that "wilderness" were wolves and coyotes, who preyed on their livestock. 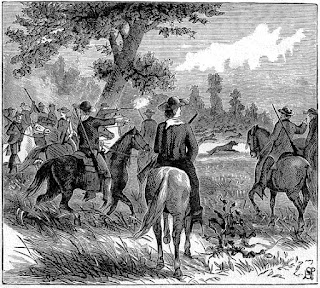 The first county bounties (cash payments) for wolves' scalps were issued in 1838. By 1874, the Lake County board offered "twenty dollars for the scalp of a wolf slain." ($440 in today's currency). The bounties were to encourage the extermination of wolves, coyotes and even crows—which were all felt to impact a farmer's livelihood.

Predators were hunted year round, but mainly in the winter months when they were easy to spot on the snowy landscape, and their pelts were thicker and more valuable. Hunters presented scalps for the bounty and retained the pelts to use or sell.

In 1854, farmer John Herrick (1806 - 1890) of Half Day (now Lincolnshire), announced he was offering a bounty of $8 for each "old" wolf and $1 for each "young one." Much of Herrick's farm was within the heavily forested Des Plaines River valley, which at the time was "much infested with wolves" that had committed "many depredations."

By the 1860s, sheep farming had increased to the point that Lake County was ranked third in the State of Illinois in number of sheep. In 1865, the county boasted 82,382 sheep. The more sheep, the more enticement for predators. 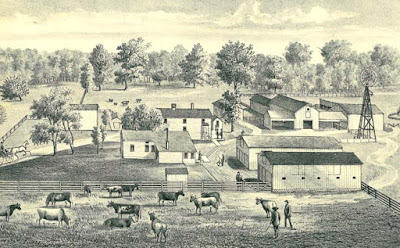 In Benton Township, to curb the wolves being "very destructive among the sheep," a "great wolf drive" was held on March 14, 1868. Hunts typically involved hundreds of men, in this instance 350, walking in a line "with guns." The day-long hunt ended at the sprawling sheep farm of Nelson Landon (1807-1884). In all, only three wolves were killed, but a "large number" broke through the lines and escaped.

While most hunts were undertaken by men, women settlers also did their part to protect family and livestock. Maria Randolph Sibley (1821-1901), who had come to Lake County from Massachusetts with her husband and young children in the 1850s, tracked a wolf that was getting their cattle. The incident may have occurred while her husband was enlisted in the 64th Illinois during the Civil War. Sibley went into the family's grain field with her gun, and a wolf came "bounding over the shocks" of cut grain-stalks, frightening her so much that she was unable to shoot. The wolf saw her, "turned and trotted away."

Modern times called for modern measures, and sheep farmer, Lewis A. Mills (1894-1986), hired a plane from Palwaukee Municipal Airport (today's Chicago Executive Airport) in Wheeling to search for wolves from the air. For two years wolves had "ravaged sheep and poultry flocks of the county without check." Mills's flocks and that of business magnate, Samuel Insull (1859-1938), whose estate (today's Cuneo Museum) was adjacent to Mills had been "among those suffering heaviest from the wolves." 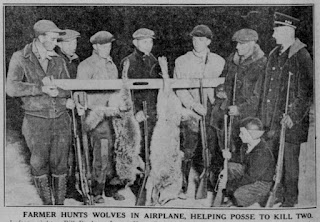 Assisting in the hunt from the ground were Gordon Ray (1893-1987) and Bob Rouse (1892-1963). Rouse shot and killed one of the wolves. When the plane landed to pick up the wolf, it overturned in the snow making it necessary to get another plane from Palwaukee. In the second round, the plane "chased" a wolf to a fence line, and Gordon Ray and Lee Kane shot it. 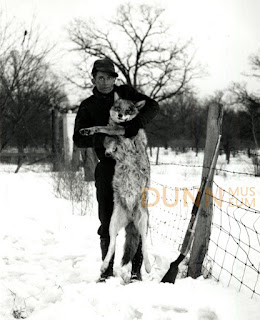 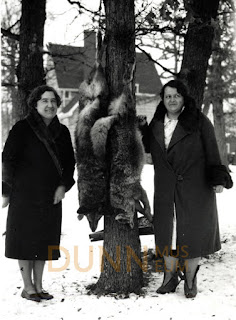 Though these farmers identified their prey as "wolves" they were actually coyotes. This is one example of how accounts can be misleading. In researching historic wolf hunts unless details were given such as "large," "big," or "gray," it's unclear whether the animal was a wolf or coyote. To add to the historical confusion, pioneers commonly used the term "prairie wolf" for coyote.

While wolf sightings have been rare in Lake County for a century, coyotes have successfully adapted to development and changes in their environment.

The Lake County Forest Preserves encourages everyone to learn more about coyotes and the important role they play in the ecosystem. Check out frequently asked questions about coyotes. Homeowner groups and other Lake County organizations can book a free informational presentation about coyotes by contacting Allison Frederick at afrederick@LCFPD.org.

Posted by Diana Dretske at 9:04 AM No comments: