The historic town of Half Day claims many firsts in the annals of Lake County history—the first post office (1836), the first school (1836) taught by Laura Sprague in her family's log cabin, and the county's first non-native settler, Daniel Wright.

Perhaps most intriguing about Half Day is its name, which provokes more interest and debate than any other place name in the county.

You may wonder why there's debate. Ask anyone and they'll tell you it got its name because, "It took half a day to get there from Chicago." That may have been true back in the day of horsedrawn transportation, but Half Day was named for Aptakisic, a Native American leader of great standing.

Aptakisic's name (also spelled Aptegizhek), was translated as "center of the sky," "sun at meridian" or "half day." He was known to the settlers as Half Day. Both Daniel Wright (1778-1873) and Henry Blodgett (1821-1905), who knew Aptakisic, documented that he was "known as Half Day." Wright went on to say that the village took its name from Aptakisic. 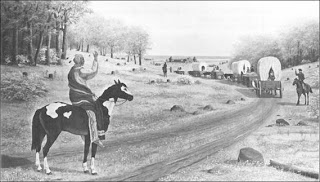 A depiction of Aptakisic (Half Day) waving goodbye to the settlers he had led to Fort Dearborn in 1832, by Lester Schrader, courtesy of Naperville Heritage Society.

Blodgett had met Aptakisic in 1832, during the Black Hawk War, when Aptakisic protected the settlers in Downer's Grove from an impending attack.

Wright became acquainted with Aptakisic and his tribe of Potawatomi in 1833 when he settled along the Des Plaines River. 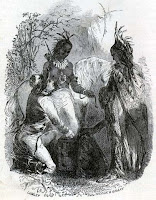 Wright remembered: "When I stuck my stake in the banks of the Aux Plain [sic] River I was surrounded by the native tribes of Pottawatamies [sic]. They helped me raise my first rude cabin, being the first house built in the county." These native people also assisted Wright in planting crops, and tending to his family when they became ill.

According to James A. Clifton in his book, The Prairie People: Continuity and Change in Potawatomi Indian Culture 1665-1965, Aptakisic was present at the negotiations for the Treaty of Chicago, which took place in September 1833. "Apparently wearing Meteya's [Mettawa's] moccasins, Aptegizhek stood and informed Commissioners Porter and Owen that the Potawatomi had no wish to consider moving west of the Mississippi until they had been given the opportunity to inspect the country there... He insisted the Potawatomi had assembled merely to enjoy their Great Father's beneficence and liberality. Could the annuities due the Potawatomi be distributed quickly so that they might go back to their villages to tend their gardens?"

Ultimately, the treaty was signed by Aptakisic (twice!) and other leaders of the United Chippewa, Ottawa and Potawatomi Indians on September 26, 1833. 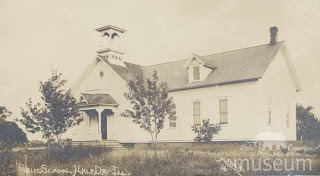 In 1918, the students of Half Day School wrote a history of their school and community. In it, they recounted that "Half Day was named so in honor of an Indian chief, Hefda, who some people say is buried in this locality." They went on to say that Half Day was a "half way station" between Chicago and the northern part of Lake County.

Excerpt from the Half Day School history, 1918.

When and how did the origin of the name change? 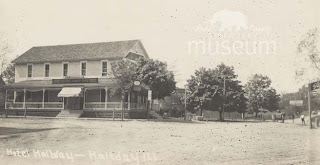 It is my assertion that the confusion was started by visitors to Half Day, possibly as early as the 1840s. In 1843, the Half Day Inn (shown above Dunn Museum 97.18.3) was established on the Chicago and Milwaukee Road (today's Route 21) as a stagecoach stop. The rutted and muddy road would have most certainly made for slow travel, leading travelers to surmise the town's name came from its distance from Chicago.

In 1886, train service was available on the Wisconsin Central Railroad to Prairie View, several miles west of Half Day. That trip would have taken at least two hours, and then a buggy ride over to Half Day, again leaving visitors to believe the name was a matter of travel time. Even with the advent of the automobile, travel was slow until roads were paved in the 1930s and beyond.

Travelers not knowing the true origin of the name, adopted a new meaning. As the people who knew Aptakisic died, and generations passed, the connection to Aptakisic faded, and the new tradition took root with no one around to contradict it. 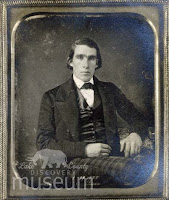 In a letter, written late in his life, Henry Blodgett once again recalled his friend, Aptakisic:

"In the fall of 1837, Aptakisic's band was removed to a reservation on the west side of the Missouri River near the mouth of the Platte and later were moved into what is now a portion of the state of Kansas, south of the Kansas River. I well remember the sad face of the old chief as he came to bid our family goodbye. ... We all shed tears of genuine sorrow ... his generous kindness to my parents has given me a higher idea of the red man's genuine worth." Henry Blodgett as a young man in 1850. (above right)

Aptakisic's legacy continued in the names Aptakisic Road, Aptakisic Creek, and the former community of Aptakisic located in today's Buffalo Grove. Aptakisic was a railroad stop on the Wisconsin Central line at Aptakisic Road (west of Route 21), and had its own post office from 1889-1904.

The town of Half Day never incorporated, and in recent years was absorbed into the Villages of Lincolnshire and Vernon Hills.
Posted by D_Dretske at 4:11 PM 25 comments: