Asiel Z. Blodgett (1832-1916) of Waukegan understood the importance of being a good leader.

During the Civil War, he served as the main recruiter and Captain of Company D, 96th Illinois Volunteer Infantry. He prided himself on knowing each of the men in his command. 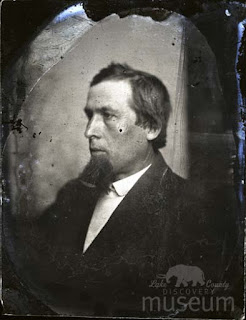 While at Wartrace, Tennessee in the summer of 1863, he was given a challenge. An officer from another company asked, "Captain Blodgett, I am curious to know whether or not you have memorized your roster."

Blodgett replied, "I am of the opinion that I have memorized it."

The officer bet Blodgett that he could not "call it correctly."

That day, Captain Blodgett was sitting in front of his tent, using the drummer boy's drum as a writing surface to make out his reports. He had set the drum on top of a camp stool, and with the challenge made, brushed aside his reports.

He wrote directly on the drum head from left to right, carefully listing every man's name from memory. All 98 men of Company D, plus the eight men who had died in the company's first year of service. Blodgett won the bet. 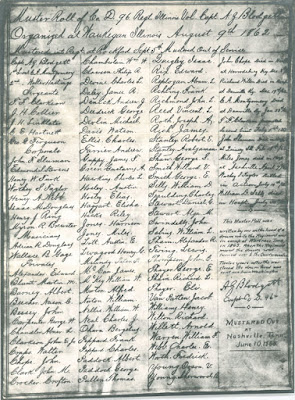 At the request of Lake County Historian, Bess Bower Dunn, Blodgett's son sent a copy of the "drum head roster." (above)

Shortly after making the roster, the 96th Illinois fought in the Battle of Chickamauga, September 18 - 20, 1863. The battle was the most significant Union defeat in the Western Theater of the Civil War, and had the second highest number of casualties in the war following the Battle of Gettysburg two months earlier.

The 96th's Company D lost five men (killed) and 18 wounded. Among the injured was Blodgett, who was wounded twice on September 20. Early in the engagement he was shot in the shoulder and though the wound hurt him greatly, he remained with the command. 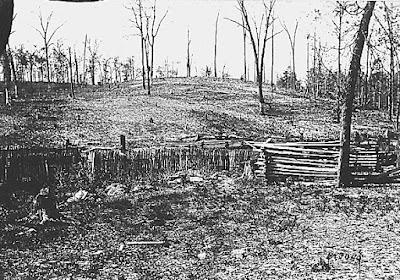 Hill Two from the Vittetoe Road. Chickamauga after the battle. (Signal Corps U. S. Army)

According to the Regimental history, on Sunday afternoon, September 20th, Blodgett was "thrown to the ground by the fall of a heavy tree-top which, striking his head and back, rendered him unconscious." This happened in the midst of the battle, leaving Blodgett temporarily within Rebel lines. "When the Union lines advanced in a second charge" the men removed the tree and "he was released from his perilous position."

The drum was lost in the confusion of battle.

Blodgett recovered only partially from his injuries and reluctantly had to resign his position in August 1864. Years later, he received an official package from the U.S. War Department. Opening it, he found the drum head on which he had written the names of his men.

In 1939, Bess Bower Dunn, contacted one of Blodgett's sons about the story. John H. Blodgett replied with a copy of the "drum head roster" and the full account.

Blodgett's son wrote: "It occurred to me that possibly some of the relatives of the men who were with Dad are still around and if so might be interested in looking it over. If Frank Justice [sic] cares to say anything about it in his paper I would like to have you send me a copy."

Indeed, Frank Just, the editor of the Waukegan Daily Sun, was very interested and ran a long article on Blodgett and the 96th Illinois.

Excerpt of article written by Athlyn Deshais on Blodgett and the 96th Illinois, Waukegan Daily Sun, 1939.

Athlyn Deshais wrote in her article: "They are gone now, those gallant soldiers who marched and fought beneath the banner on which was inscribed the magic figures, 96.... The day of the eye-witness reminiscences belongs to the past."

For more, read by post on the life of Asiel Z. Blodgett and post on the 96th Illinois at the Battle of Chickamauga.

Posted by Diana Dretske at 12:52 PM No comments: