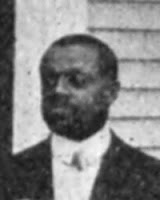 Brister was born in Philadelphia to Dr. Joseph Brister, D.D.S. and Olivia Parker Brister. He entered the University of Pennsylvania's dental school in 1879, receiving his diploma in 1881. He was the first African-American to earn a degree from Penn. From 1880 until shortly after 1890, James practiced dentistry with his father.

While in Chicago, Brister came into contact with John Alexander Dowie's Zion Movement. Chicago's large population, and Dowie's Tabernacle location across the street from the main gate of the World's Columbian Exposition were significant in attracting new members to his church, including Brister. 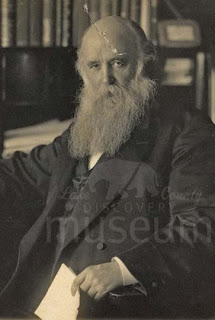 Born in Scotland and raised in Australia, John Alexander Dowie (1847-1907) (above) was a charismatic preacher and faith healer who established the Christian Catholic Church.

Dowie came to Illinois in 1893 to preach his message of “clean and faithful living” outside the entrance to the Columbian Exposition. By 1899, his followers numbered in the tens of thousands, and had donated enough money for Dowie to consider establishing a socialist utopia. Ultimately, Dowie  purchased 6,000 acres of farmland in Benton Township for his "City of God," which became Zion, a theocracy under his control.

Although Dowie was a controversial figure and his leadership was criticized for anti-democratic tendencies, he was ahead of his time when it came to social issues. He believed in an eight-hour work day at a time when 12-14 hour days were common, and allowed women to vote in local elections. He also believed in diversity and strongly enforced a policy against racism, making his church and Zion attractive to African-American families.

About 1903, James Brister moved his family to Zion, Illinois as part of Dowie's Christian Catholic Church. By 1905, 200 of Zion’s 10,000 residents were of African-American, South African or Caribbean heritage. Possibly the most influential of these African-American citizens was the town’s dentist, Dr. Brister.

Brister’s dental practice was in the “Temple Cottage” on Sheridan Road, and his family lived on Ezekiel Avenue and later Enoch Street. 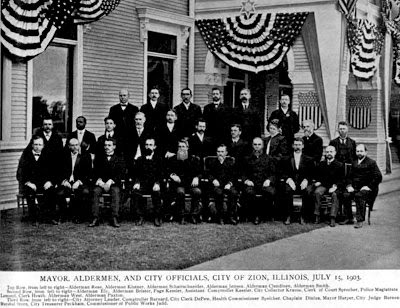 In Zion, you did not become a leader in the church or hold public office unless Dowie personally chose you. Dowie selected Brister to be a deacon of the church, and his wife, Anna, a deaconess. Brister was also selected to be a member of the first Zion City Council in 1903. (Photo above showing James Brister - 2nd row left - as a member of the first city council for Zion, 1903. Collections of University of Pennsylvania Archives and Record Center).

During the Civil War, Susannah Smith (1839 - 1914) of Millburn wrote letters to her brother, George, who was with the 96th Illinois Regiment. One of George's comrades, Richard Thain, was rightfully envious of the long letters and asked George for permission to correspond with his sister. 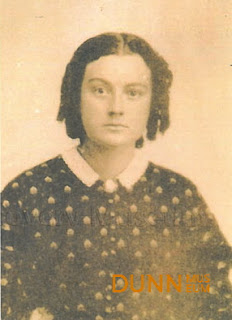 I suppose you will think me rather bold in addressing you in this manner but I hope you will not be offended. My object in corresponding with you is to have something to occupy my time and to relieve the monotony of camp life. ... I hope you will do me the favor to answer this poorly written letter and if you wish to keep a correspondence I will be very happy to answer your letters. Believe me, Your Sincere Friend." (Dunn Museum 93.45.433) 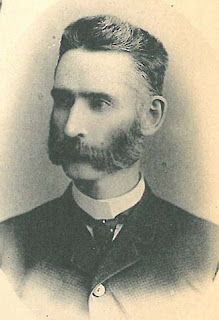 Richard S. Thain, circa 1885 from the History of the 96th Illinois Regiment. (left) Richard was the Second Brigade's postmaster and was nearly killed by a Confederate scout.

It's difficult to see a romance blossoming in Richard's matter-of-fact letters, but in Susie's diaries there is plenty of evidence of her affection for him and the attentions he gave her following the war. (Susie's letters to Richard had been saved by the family, but unfortunately were destroyed in a fire at a family member's cabin in California in 1992).

The "soldier boys" were discharged and sent home in June 1865. On June 15, while taking a break from teaching at the Grubb School near Millburn, Susie wrote of her anticipation in her diary:

"Heard Richard was in... how I do wish that I could see him. I stand at the window a moment and then take a turn in the yard hardly knowing what to do... I can write no more for the girls are crowning me with oak leaves and roses, so, as they say, that their teacher may look pretty, if she should have company this afternoon." (Dunn Museum 93.45.290)

She did have company that afternoon, and recounted the moment in her diary: "I have seen Richard, he came up to the schoolhouse... I thought that he was very kind to do so, but I could hardly speak to him, I was in such a tremble of excitement." (Dunn Museum 93.45.290)

The old Grubb School where Susie Smith taught and Richard Thain visited her on his first day back from the war. Photographed in 1966. Image courtesy of Historic Millburn Community Association.

This was probably not Richard and Susie's first meeting. They had both grown up in and around the small community of Millburn. However, their correspondence most certainly changed the dynamic of that relationship. Several days later, Susie wrote that she had spent "the happiest day of my life" in Richard's company, singing and talking.

Despite their age difference, Susie was six years Thain's senior, they spent the next year and a half together. Richard was often in Susie's company at church meetings, and spent evenings at the Smith family home. 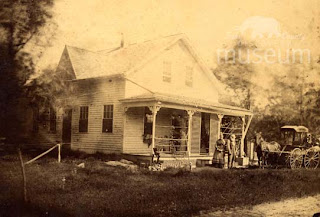 In early fall 1865, Richard moved to Chicago to start in business, but continued to make frequent visits to Millburn. On April 13, 1866, Susie wrote: "After tea, looked out and saw Richard coming up the path, quite a joyful surprise. R staid at our house all night."

"Christmas... Had a good time and yet there is such a blank when R is gone that I cannot enjoy my self as well. How strange it seems that one person can add so much to anothers happiness and become as it were a part of anothers existence. It seems as though the greatest happiness I have next to the knowledge of the love of God is the thought of the love of my Richard thoughts of him are ever in my mind."

And then Susie's heartbreaking entry for January 1, 1867: "Happy New Year was exchanged on every side, and we passed a very pleasant day and evening... When we reached home my disappointed heart which I had managed to keep down all day gave way and I had a hard cry. I did hope to see Richard to day and I know he would have come if it had been possible but I was so grieved over it seemed impossible to keep from crying. And so I did cry. May God forgive me for being so weak. When will I ever learn to control myself. Ned dear brother came and put his arms around me and tried to comfort me." (Dunn Museum 93.45.290)

Susie's diary ends on January 17th, leaving us with many questions, but from her tears we know she was not ready to lose Richard.

There is a happy ending for Susie, but it does not involve Richard Thain. He spent a couple of years traveling cross-country and building his business before settling down with Hannah Abbott in 1869 in Oak Park, Illinois. After Hannah's death, he married Emma Jenness in 1881.

In 1868, one year after the end of her romance with Richard, Susie began co-editing the Millburn Literary Association's publication with her neighbor, David J. Minto. They had been attending the same prayer meetings and evenings of singing at Mr. Hughes's for two years, and were both teachers.

Susie's one surviving letter is to David, dated May 7, 1869 from Chicago. Susie wrote to "Dear Davie" that her friend Mrs. Emerson wanted to "commence" the letter for her, because she knows "how to write love letters." 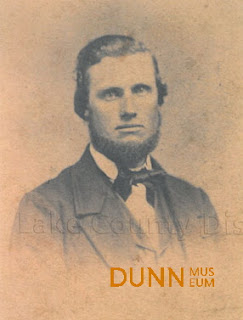 David J. Minto, circa 1870. (Dunn Museum 93.45.52) David enlisted with the 96th Illinois, and was honorably discharged due to illness in April 1863. On his return to Millburn, he farmed his family's land, and taught in the local schools.

In the same letter, Susie wrote: "Don't you think Davie that the 20th would be a good day for... you know." That "you know" referred to a possible wedding day. Indeed, they were married on that very May 20th by Rev. Thomas Lightbody of the Millburn Congregational Church, and remained married for 44 years. 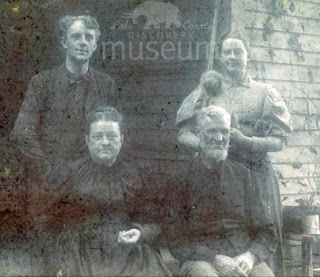 Photographed in 1898 at the Minto family homestead are Susie and David Minto (seated) with their only surviving children, David Harold and Una (with kittens). (Dunn Museum 93.45.91)

Susie and David's granddaughters, Katherine and Lura, donated the family's letters and diaries to the museum in 1993. The museum's Minto Collection is hosted online by the Illinois Digital Archives.