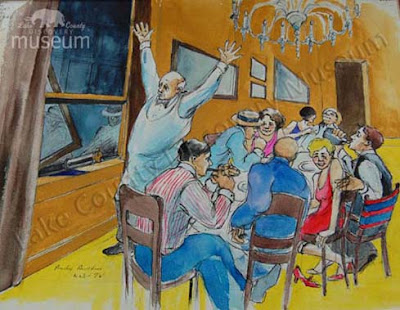 Prohibition gang violence spilled over into Lake County on June 1, 1930.

Mobsters from the Capone and the Druggan-Lake gangs were gunned down at Manning's Hotel in what came to be known as the "Fox Lake Massacre." (Watercolor painting above depicting the Fox Lake Massacre by Andy Austin. LCDM 77.23.4)

The Chain O' Lakes region became a notorious hangout for Prohibition gangsters. The likes of Al Capone (1899-1947) and his gang could freely gamble and drink the nights away. Capone was reported to have owned a summer house on Bluff Lake near Antioch, and to frequent the Mineola Hotel in Fox Lake. George "Bugs" Moran was also reported to have a home on Bluff Lake. 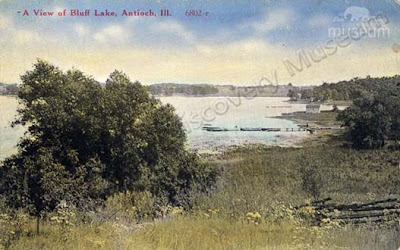 The reason behind the "Fox Lake Massacre" is still debated, but many believe it was part of Chicago's beer wars, and a dispute over control of the Chain O' Lakes region beer distribution between Al Capone and Bugs Moran.

Mario Gomes, Al Capone expert and webmaster of the encyclopedic My Al Capone Museum website, noted that: "Moran and his men had to constantly out-think and stay one step ahead of the Capone boys in order to survive." By the time of the Fox Lake Massacre, Moran was being squeezed out of his territories and his days as a Chicagoland gangster were coming to an end. 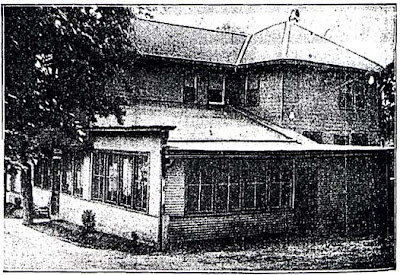 The Manning Hotel on Pistakee Lake, showing the enclosed porch where the gangsters were seated. Chicago Tribune photo, June 2, 1930.

According to the Chicago Tribune, "Alderman Manning had changed beer dealers, putting in Druggan beer in preference to 'local beer' in which the Bugs Moran gang—hibernating in the resort country—had taken a partnerly interest." James Manning was a Fox Lake alderman and the proprietor of Manning's Hotel. Manning's was located on Pistakee Lake near W. Grand Avenue, west of Route 12. (The building still stands as a private residence). 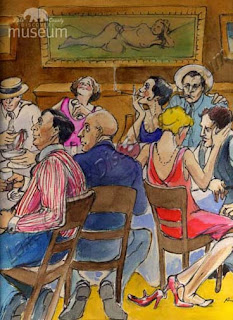 Watercolor painting by Andy Austin of Chicago gangsters and their "molls" drinking at Manning's Hotel, the night of the shooting. One of the victims, Vivian Ponic McGinnis, is shown in pink at back. (LCDM 77.23.1)

At 1:40 a.m. on June 1, 1930, gangsters in the enclosed porch at Manning's were machine-gunned without warning. 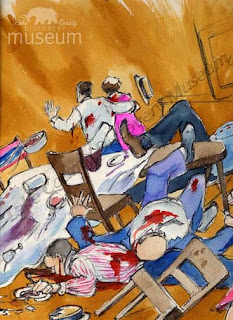 Watercolor painting by Andy Austin of the Fox Lake Massacre, with gangsters shot and fleeing the scene. (LCDM 77.23.5) 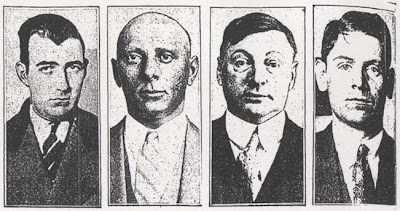 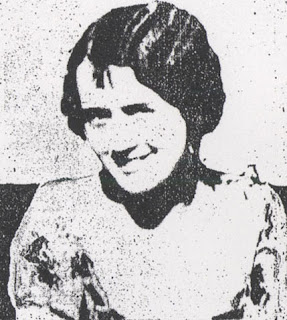 Also wounded was Vivian Ponic McGinnis (1903-1993), wife of Chicago attorney Arthur J. McGinnis, and whose mother, Anna Ponic, ran a resort next to Manning’s. Mrs. McGinnis was drinking with the gangsters when the shooting occurred. She and George Druggan were driven to Chicago, two and half hours away, for medical attention. Vivian married George Druggan in 1934. Chicago Tribune photo, June 2, 1930.

Chief of Detectives Stege commented: "Ordinarily it would be bad medicine for them to invite a war with the Capone-O'Donnell and Druggan-Lake outfits, but the Moran and Aiello hoodlums have been up in Fox Lake long enough to start any kind of war." 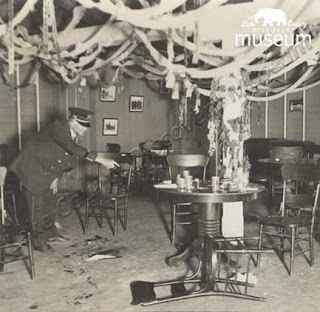 In the aftermath of the shooting, a policeman points at a detail of the crime scene at Manning's Hotel. (LCDM 2011.5)

Louis Capella, the bartender at Manning's, said all was "merriment" that night. "They were having a good time all evening." Just before the shooting he started sweeping around the Druggan table to give them the hint to leave. When he heard the first shot, he dove behind the bar and escaped injury. "When it was quiet, I looked out and saw some of the injured people running." 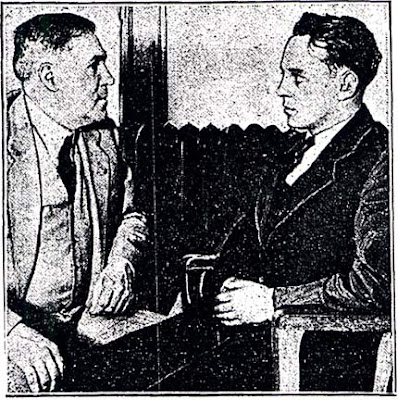 Many have strongly suspected that the Fox Lake Massacre was in retaliation for the St. Valentine's Day Massacre on February 14, 1929. Seven of Moran's associates were lined up against the rear inside wall of a garage at 2122 North Clark Street, in the Lincoln Park neighborhood of Chicago's North Side, and executed.

According to Bugs Moran biographer, Rose Keefe: "The St. Valentine's Day Massacre on February 14, 1929 marked the end of Moran's reign over the North Side. For over a year, the shaken gangster debated the feasibility of continuing the fight, briefly partnering with minor league Capone rivals like renegade Sicilian Joe Aiello and pimp Jack Zuta. In late 1930 he finally conceded defeat. But he did not slink away in disgrace. The door had closed in Chicago, but he found windows of opportunity elsewhere." 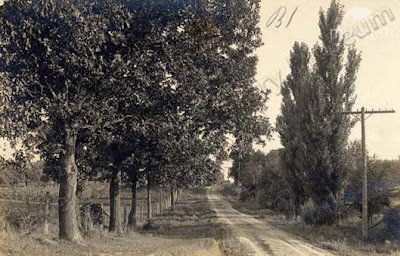 This photo postcard of a road near Bluff Lake gives an accurate view of area roads at the time of the Fox Lake Massacre. (LCDM M-86.1.19)

Local authorities did not seem very interested in solving the shooting at Manning's. Within several days of the murder, State's Attorney, A.V. Smith, announced that he believed the killers were professionals from New York and were long gone.

Bugs Moran was arrested at Elizabeth Cassidy's resort on Bluff Lake in October 1930. The arrest was not related to the shooting at Manning's Hotel.

For continued reading on this era and Bugs Moran, I highly recommend, "The Man Who Got Away: The Bugs Moran Story," by Rose Keefe.

I read that Verne Miller had done the killing in revenge for the Capone gang's slaying of Eugene "Red" McLaughlin.Could you confirm this please?

"Verne Miller biographer Brad Smith summed up the Fox Lake Massacre succinctly in 'Lawman to Outlaw': 'The men who stayed up that night drinking on the porch of Manning's Resort learned too late what others would also come to learn. It was hazardous to your health to cross a friend of Verne Miller.'"

Interesting assortment of characters. Sam Pellar was of course famous for being a body guard and driver for north side boss Earl Hymie Weiss, and surviving what was called ganglands most perfect execution, in front of Holy Name Cathedral in 1926. Bertsches' brother Barney was also a Bugs Moran ally.