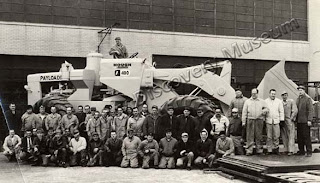 The company became the largest employer in central Lake County with 3,000 employees, and eventually the world’s largest manufacturer of rubber-tired tractor shovels. 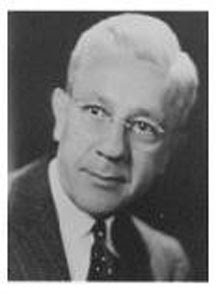 Hough was working as a mining engineer in Wisconsin in 1920, when he conceived of the idea of "moving bulk materials in large quantities with hydraulically operated, mobile equipment."

By 1933, his company was incorporated and operating out of Chicago. In 1939, he opened his plant in Libertyville, which covered 14,400 square feet, and where the first Model HS Payloaders were manufactured. View of Hough Company, Libertyville, 1939. (LCDM 2010.34) This machine arrived at a time when there were no machines with shovels attached to the front or rear, and it provided speed, maneuverability and fast cycle times.

Hough was an industry and community leader in Libertyville. Under Hough's leadership and legacy, the company defined the modern wheel loader, and accomplished such achievements as four wheel drive, torque conversion and the hydrostatic transmission. In 1952, Hough sold his company to International Harvester, and became a division of that conglomerate. Frank Hough continued as the chief designer, and the PayLoader name was retained. By then his plant occupied over 312,000 square feet and employed more than 1,000 people. 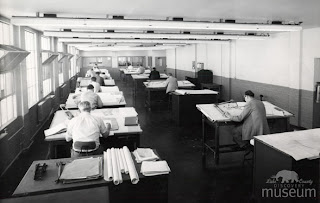 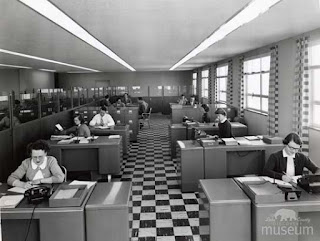 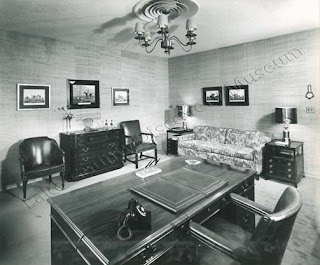 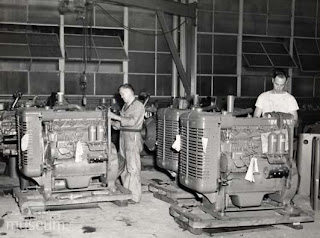 View of the manufacturing operations at Hough-International Harvester, circa 1965.
(LCDM 2010.34.35) 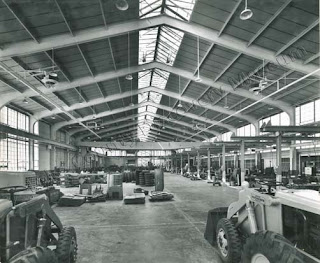 Hough dissolved in 1966 and became a division of Harvester. Dresser Industries bought the plant from Harvester in 1981. Komatsu Ltd. formed a joint venture with Dresser in 1988. Komatsu is a Japanese company that manufactures construction and mining equipment, and was founded in 1917. 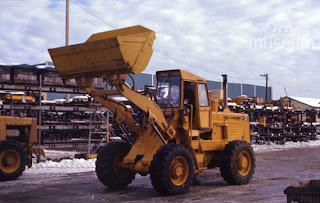 In 1995, Komatsu America Corporation purchased the plant. The Libertyville plant closed in 1996 when Dresser and Komatsu reassessed their manufacturing capacity in the United States. Komatsu's mining products were consolidated under the name Komatsu Mining Systems in 1997. 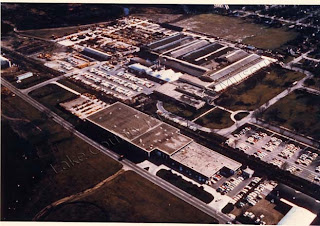 Like Hough and International Harvester before them, Komatsu still uses the Antioch Proving Grounds for testing earth-moving machines.

Komatsu's headquarters are now in Rolling Meadows, Illinois. Komatsu America is the second-largest, fully-integrated manufacturer and supplier of construction equipment in North America. 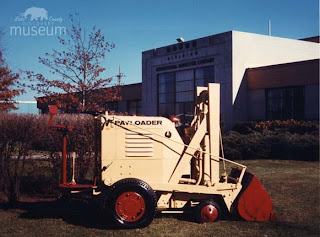 In recent years, the museum has received several generous donations of Hough and International Harvester items from the company and former employees, including photographic images, newsletters, Payloader models, and even a drafting table and drafter's tools. A sample of the photographs and slides have been shared in this post.

The earliest Hough donation was made to the museum in 1961 by the company itself. The 1939 Hough Model HS Payloader (LCDM 61.51) is shown in front of the company plant.
Posted by D_Dretske at 3:34 PM

check the pictures of the loaders the one shown at the conexpo is a terex brand and the one shown in the working shot is a caterpillar brand. What happen to Hough pictures?

Thank you for your comment. I've replaced the non-Hough related images with Libertyville plant views.

The aerial photo of entire plant is a reverse negative photo. With highway 176 shown in foreground, the front entry circle drive should have been to the right (west) of the photo.

Thanks, Lou. I've flipped the aerial photo to the correct orientation.

My first job after high school was for International Hough, in 1985. Looking at the dates listed in this article, apparently Harvester and Dresser had already bought them out. It was my job to use an electric eraser to remove the old company name and logo off of the blueprints in the engineering department and stick a new company label on in it's place. I was told at the time that the room where the blueprints were stored and where I worked was an underground bomb shelter. The building was located off Rockland Road.

Does anyone know a thomas Nielsen who worked for either hough / international or UAW 1643 in libertyville ill in 1967? He was fiends w Gerry clary who also worked there...
Any info please contact me at
Vixion2go@hotmail.com
Thank you

I found a Frank G Hough toy payloader in a cellar. It is 17X7X6 in tough shape but I found the name and Rockford, Ill. on a front logo. Any worth?

Greg,
Thanks for your comment. I replied to you via email.
Diana

The Hough plant had a very large testing ground that ran from the plant building almost all the way west to St Mary's road.
They tested payloaders there and created and leveled little mountains and valleys all over what had to be 30 acres of land. For a kid who could sneak under/over the fence on weekends, it was the greatest unsupervised playground ever.

It was most likely made by nylint in Rockford. Look on the tires for the possible manufacturer. Condition establishes price. Nothing else it is good for parts for a collector to repair another toy.

Hello, I have browsed most of your posts. This post is probably where I got the most useful information for my research. Thanks for posting, maybe we can see more on this. Are you aware of any other websites on this subject. Forklift Rental

I worked there late 60's & 70's Does anyone remember Ed Krumely the boss.H e had realtives in Willard wi. stoneeeee451@hotmail.com

Hello , I'm searching for any information on my grandfather. he worked at the Hough plant for 20 years as the Forman of the implement division. His name was Irvine Feltner, any information about him please contact me at wfeltner18@Gmail. Com thank you.

My name is Rick Sparks. I worked in assembly at the Hough plant from 69-72. I initially worked on the H65-80 line. Most of my time there was spent building D-500's. I built the front half on second shift.

It was one of the most interesting jobs I ever had.

My dad transferred from Milwaukee to the plant in 1973-1988 retired. His name was Richard "Dick" Langlois. He was a Machine Repairman. Usually worked 2nd shift. He and my mom Lucy got a place in Florida for their retirement. Mom got real sick January 1988, she died August 29, 1988, dad retired August 31,1988. International Harvester was an amazing company. Blessings to you all. Linda

Thank you for sharing this story, Linda. All best wishes!

I worked at the plant from 1966 thru 1973. I started in production stores and ended up in cost accounting. I have a lot of good memories.

Google Tractor Parts, Idaho. General Tractor? anyway, Google people who work on Hough tractors and they will tell u. I called one and they thought "gas". Oddly, I worked across from that line for three years, 1969-71 and never paid any attention! Build H65 and H80 and found a home building 500D's. Good luck and have fun!

The following picture "Aerial photograph of Libertyville plant looking southeast from Route 176, circa 1975. (LCDM 2010.34)" is before 1975. I know this as my father (Rodney Anderson) worked in the Engineering Division off of Rockland Road, which is not in the picture. I know this as I was a freshman at LHS. It's a great picture but it may even be prior to 1972 as we moved to Libertyville at that time.

I worked as Bilingual Secretary at Dresser's plant in Mogi das Cruzes SP Brasil, prior to joint venture with Komatsu. Anyone from Brazil here? In 1987 I was about to move to Libertyville IL to work as secretary, but changed my mind. Instead I remained in Brazil working as missionary on behalf of streetkids. Anyone from Libertyville here? Sorry, I couldn't come, but it's never too late! Who knows? ;D

My dad worked at Hough in the 40's-60's before they were changed to Intl. Harvester. He was offered a buy-out which he took. He was a machinist. Arthur Curtis Evans. I remember the lavish Hough family christmas parties where they had gift for all the children and pictures with Santa. We got miniature sized Hough Payloaders with moving parts. They were great fun and I'm sure we played them to death in the sandbox moving materials around. Nice memories. I looked at the group picture to see if I could spot my dad but it's a bit too grainy. Thanks for the history.

Thanks for your comment Aleata. It made me think back. It was IH Hough when I worked there. One Christmas we got a turkey. The next year we got a window scraper! An IH toy D500 is what I want!