Kuhn's Rock and the Underground Railroad


In 1846, an anti-slavery society was formed in Lake County. Abolitionists promoted the abolishment of slavery. Some aided escaped slaves on the Underground Railroad which wasn’t a railroad at all, but a secret network of safe houses and people who helped slaves reach freedom in the north.

Under the Fugitive Slave Act of 1793, it was illegal to aid runaway slaves. When the act was strengthened in 1850, underground activity greatly increased. Though Ohio and Pennsylvania probably saw the most activity, Illinois had a number of underground routes. One departed from Chicago taking escaped slaves to Canada by way of the Great Lakes, and another went north over land through the area of Burlington, Wisconsin. 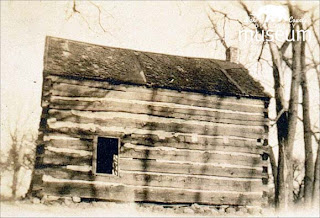 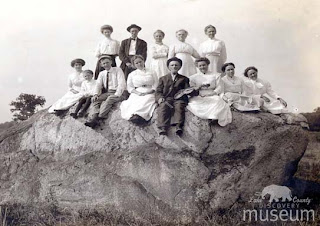 Photo of Kuhn rock from the Browe School History, 1918. This large granite boulder was used as a landmark to direct runaway slaves to the "safe house" at the Kuhn family's cabin. LCDM 2003.0.36.

Since the railroad needed to be kept secret, there were no maps to guide escaped slaves, only the stars in the night sky, landmarks and verbal directions. Finding the Kuhn Family home in rural Lake County of the 1850s would have been a trick if not for a distinct landmark in the vicinity known as Kuhn's Rock. Shown at left is the John Strock Family on an outing to Kuhn’s rock, circa 1918. 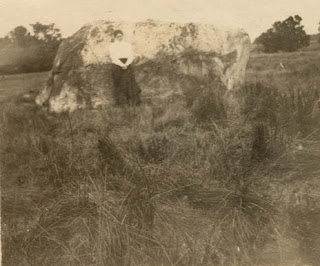 The rock is thought to be the largest gray granite rock in the State of Illinois. It was deposited prominently on the landscape by the Laurentide Glacier as it melted and retreated north some 12,000 years ago.


Here is Bess Bower Dunn posing next to the rock, circa 1910. This photo gives a good perspective of the rock nestled on farm land. LCDM Bess Dunn Collection

With the construction of Interstate-294 in the late 1950s, the rock needed to be moved out of the road's right-of-way. Road contractors, Campanella and Sons, moved Kuhn's rock onto private property.


The first Eucharistic Congress of the Catholic Church took place in Lille, France in 1881. The 28th Congress was held in Chicago, June 20-24, 1926, the first time it had been hosted in the United States. It was considered the greatest religious gathering in modern times. 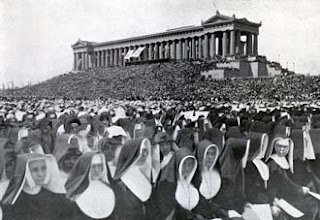 On June 24th, 750,000 people made a pilgrimage in a Eucharistic Procession from Chicago to St. Mary of the Lake in Mundelein. The participants traveled on foot, by auto, bus, and by rail. Shown below is a view of St. Mary of the Lake with the procession being led by Cardinal Bonzano. The Chapel of the Immaculate Conception is at left. 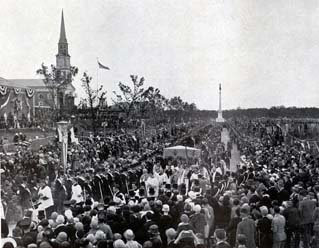 The village's population swelled from 590 to 750,000, as the faithful and Church religious gathered from around the world at St. Mary of the Lake. Chicago's North Shore Line railroad made history when it transported 250,000 people to the event. Today, a trail on the south side of Route 176 is all that remains of the line that brought people to St. Mary's. 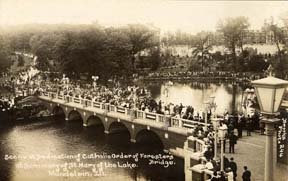 In 1920, Cardinal Mundelein had announced plans to build St. Mary of the Lake. At right is a postcard view of the dedication day, celebrating the opening of the seminary.

A colorized view (below) of the Eucharistic Procession at St. Mary of the Lake with prelates crossing one of the bridges on the property. 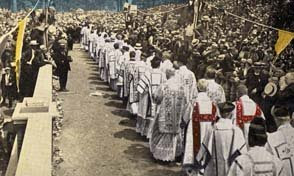 The village adopted George Cardinal Mundelein's name in 1924, in honor of his building the seminary and for what some called as a way to "cash in" on the free advertising the seminary and Eucharistic Congress would bring.
Posted by D_Dretske at 3:14 PM 1 comment: 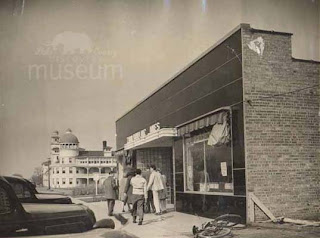 Perhaps you've heard the saying, "If our town didn't have a bowling alley, we'd have no culture at all."

Bowling became hugely popular in the U.S. in the 1950s thanks to television. Broadcasts of “Championship Bowling” and “Bowling for Dollars" had wide viewership. Above is a photo of the Zion Bowling Lanes on Sheridan Road, circa 1960, taken by the Press Association Inc. Notice the modern, streamlined building with the historic Zion Hotel in the background which was razed in the 1970s (the dome is still preserved onsite). 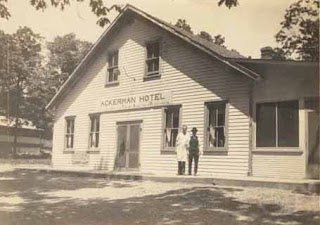 Ninepin bowling was brought to the New World by European settlers. The origin of the tenpin game in the U.S. is unknown, but by the late 1800s it was prevalent in Illinois, Ohio and New York.
The Ackerman Hotel in the Fox Lake area, shown here about 1930, was one of many local hotels that had a bowling alley. The Mineola Hotel in Fox Lake also had an alley in its basement.

I love the sound of bowling, the way the ball hits the pins with a crash. One of my clearest recollections of bowling as a child was on vacation with my family in the 1970s. I stood at the line and found my mark, swung my arm back, and the ball went flying off my hand and into everyone waiting their turn! 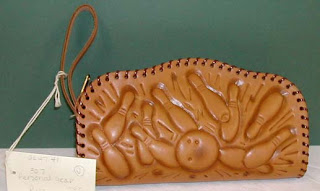 This bowling-themed purse is from the Museum's permanent collections. It was used in the Prairie View area (now Lincolnshire) around 1962, no doubt on bowling night. 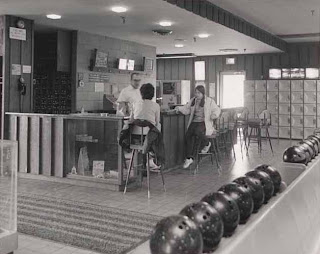 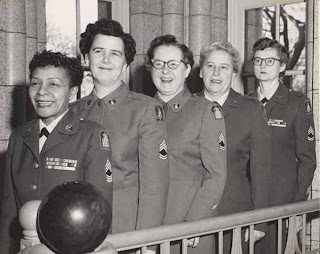 During World War I, Curtiss JN-4 airplanes were built and tested in Waukegan. Also known as "Jenny" by Americans for the JN designation in the name, the biplane was probably North America's most famous WW I plane. 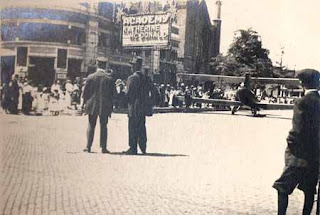 The photo above is of a parade on Genessee Street in Waukegan, July 3, 1920, and shows the Curtiss JN-4 coming into camera view at right. The Academy Theater is prominent in the background. During the war, the Jennys were often used in local parades to promote the purchase of Liberty Bonds.

The JN-4 was used to train pilots, but each one needed to be test flown first. Curtiss had its own test pilots, and the Army Signal Corps also had a pilot test the planes before they were accepted by the U.S. Army. The test field was on the north side of Waukegan in today's Lyons Woods Forest Preserve on Sheridan Road.

The runway on the test field was a farm field, rolled by rollers to smooth the ground as much as possible. The planes would fly to other airfields in Wisconsin, Chicago, and Rantoul. 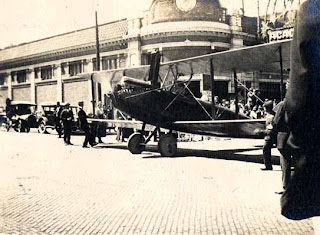 At right is a closer view of the Jenny on parade in Waukegan, 1920.

The twin-seater biplane's maneuver-
ability made it ideal to train pilots. Its top speed was 75 mph, and its service ceiling was 6,500 feet. The JN-4B models were built in Waukegan and powered by an OX-2 piston engine; 76 were sold to the U.S. Army, and 9 to the U.S. Navy.
Posted by D_Dretske at 3:00 PM 3 comments: