Memorial Day was originally known as Decoration Day, a time set aside to honor the nation’s Civil War dead by decorating their graves. 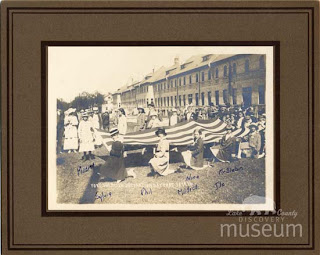 It’s difficult to pinpoint the origins of the day, but it seems likely that it had many separate beginnings, including women’s groups in the South who decorated graves before the end of the Civil War.

The first widely observed Decoration Day was on May 30, 1868, commemorating the sacrifices of Civil War soldiers by proclamation of General John Logan (1826-1886), national commander of the Grand Army of the Republic. Logan who was from southern Illinois and pro-Southern before the Civil War, decided to join the Northern cause to preserve the Union, and eventually became a general. After the war he served as an Illinois senator from 1871-77 and 1879-1886, and in 1893 was honored with a National Guard weapons training camp named for him—Camp Logan in Zion.

During the 1868 celebration, General James Garfield (1831-1881), later the 20th President of the United States, made a speech at Arlington National Cemetery after which 5,000 participants decorated the graves of the more than 20,000 Union and Confederate soldiers buried there. 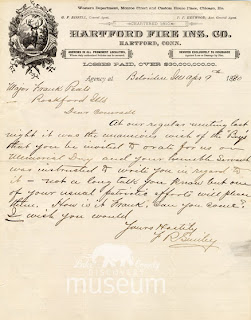 The letter above is addressed to Frank Peats, formerly of the 17th Illinois Regiment (Civil War), April 9, 1880. It reads:

Dear Comrade, at our regular meeting last night it was the unanimous wish of the 'Boys' that you be invited to orate for us on Memorial Day and your humble servant was instructed to write you in regard to it - not a long talk you know but one of your usual patriotic efforts will please them. How is it Frank. Can you come? I wish you would. Yours Hastily, Y.R. Swieley.

When the Civil War broke out in April 1861, Peats wrote his fiancee saying that he had to engage in the "struggle between the sons of freedom and traitors to every principle of right and justice." (LCDM Frank Peats Collection 94.5.211)

By 1890, Decoration Day was recognized by all of the northern states. The South continued to honor their dead on different days until after World War I when the holiday changed from honoring just those who died fighting in the Civil War to honoring Americans who died fighting in any war. In 1971, Congress declared Memorial Day a national holiday to be celebrated the last Monday in May. 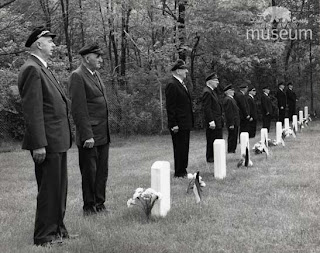 "German War Veterans' Memorial Day Service, May 29, 1972, Fort Sheridan." (LCDM 92.24.1821) In 1944, Fort Sheridan assumed control of prisoner of war camps in Illinois, Michigan and Wisconsin—a total of 15,000 prisoners of war. German POWs were housed in newly constructed barracks at the south end of the Fort. Nine German POWs are buried at the Post Cemetery. However, none of these men died at Fort Sheridan. 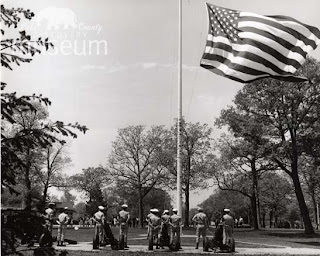 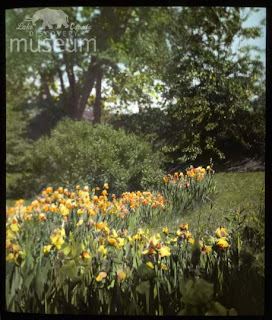 For years, I have marveled at a group of 32 glass lantern slides in the museum's collection. They are beautiful slides of plants and flower gardens, hand-colored in spectacular tints, and attributed to G.D. Clarke. (right) Clarke's slide taken in Waukegan, circa 1910, titled, "Sherwin Wright-Edge of the Wild-Aurea-Flavescens." BBDM 93.32.381

When I looked at the slides last week, wanting to share them as springtime inspiration in this blog, I recalled that G.D. Clarke had not been researched. There are a number of individuals in our records who need to be researched to further our understanding of their lives and items they donated, and writing this blog gives me a chance to do that. So, I set to work with my research, and was surprised by an interesting discovery.

The donor of the slides was Mrs. Elam Lewis Clarke. Since the slides were made circa 1910, I looked in early Waukegan city directories, and found listed Elam L. Clarke (lawyer) and his wife, Georgia D, living at 740 N. Sheridan Road, Waukegan. This answered my initial question—"G.D. Clarke" was Georgia D. Clarke (1871 - 1952). Elam Clarke, by the way, was the son of Lt. Colonel Isaac Clarke (1824-1863), hero of the 96th Illinois Regiment.

Through census records, I was able to ascertain that Georgia's maiden name was Douglas. She was the granddaughter of nationally known nurseryman, Robert Douglas of Waukegan. Some of the subject matter of her slides were pine trees planted by Robert Douglas. 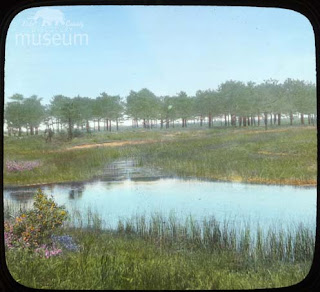 Georgia Douglas Clarke photographed these White Pines on the Dead River, Zion, circa 1910 (above). They were planted by her grandfather, Robert Douglas, in the late 1800s, in what is today's Illinois Beach State Park. BBDM 93.32.361

Douglas bought sapling pines from Europe and planted them in the sandy soil north of Waukegan along Lake Michigan (today's Illinois State Beach Park). The land was cheap, and Douglas thought the soil would be good for growing. He planted 200,000 seedlings, white and Scotch pine, some of which were reportedly sourced from the Black Forest of Baden-Wurttemberg in Germany. Their descendants can still be seen near the lakeshore at the state park. 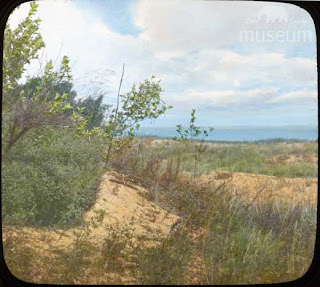 In 1888, Douglas, and famous landscape architect, Jens Jensen, began preservation efforts to make the area of the Illinois State Beach Park a regional park. With industry encroaching from the south, sand mining devastating the dunes, and parts of the surrounding countryside succumbing to farm pasture and homes, it looked like the unique beauty and habitat of the area would be lost. Douglas's granddaughter, Georgia, documented the site's beauty in her lantern slides in the 1910s. Legislative efforts to save the area finally began in the 1920s. "Dunes of Lake County" by G.D. Clarke, circa 1910. BBDM 93.32.369 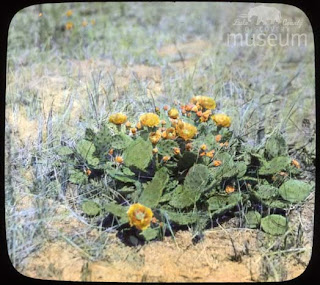 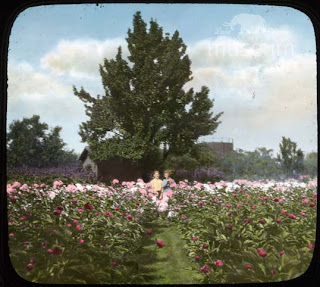 The beautiful peony garden above was located down the bluff on Sheridan Road at Grand Avenue. The view is looking south with a potting shed in the background at left and a gas storage tank at right. As early as 1861, this area was designated on plat maps as "Greenhouses," and Grand Avenue did not run east of Sheridan Road until well into the 20th Century. 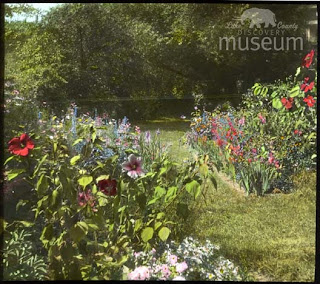 During World War I, Georgia sold flowers from her garden to benefit Victory Memorial Hospital and the Red Cross.

Special thanks to Beverly Millard at the Waukegan Historical Society for additional information on Georgia D. Clarke and Elam L. Clarke.


In 1914, the Federal Government designated the second Sunday in May as Mother’s Day.

The idea for Mother's Day in the United States may be traced to “Mother’s Day for Peace,” which began to be promoted in 1872 by Julia Ward Howe (1819-1910). Howe wrote the lyrics to the “Battle Hymn of the Republic.” She was also a proponent of peace and sponsored celebrations honoring motherhood, womanhood and peace beginning in 1873. 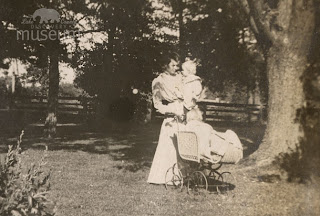 Mildred Holloway Minto standing "under the maples" on the family farm near Loon Lake with her daughters, Katherine (in her arms) and baby Ruth in buggy, circa 1908. LCDM 93.45.77.4

The first true Mother's Day observance was held on May 10, 1908 as a church service honoring Anna Reeves Jarvis, who had worked during the Civil War to better sanitary conditions for soldiers and to reconcile people who had fought on opposites sides of the war. Her daughter, also named Anna, thought that children often lacked an appropriate appreciation for their mothers while their mother was still alive, creating the hope that a holiday honoring mothers would increase respect for parents and strengthen family bonds. 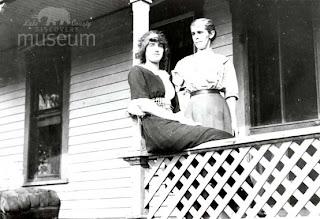 Harriet Rouse Ray and her daughter, Pearl, on the porch of their home at the Ray Farm, Diamond Lake, 1914. The family ran a summer resort, and Harriet was known as an excellent cook. Her Sunday chicken dinners were especially well attended. LCDM 91.17.34.

In Lake County, there is only one legendary woman known to have used “mother” in her name. Wealthy Buell Harvey Rudd, or Mother Rudd, was the proprietor of the O’Plain Tavern in Gurnee in the 1840s and 1850s. 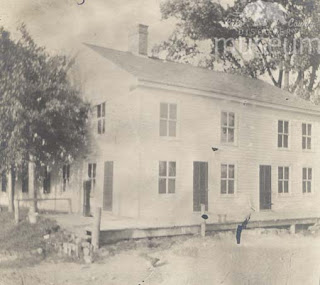 The Mother Rudd House, as it came to be known, was something of a “town hall” and meeting place for the community, and Mother Rudd became synonymous for hospitality. Today, Mother Rudd’s house is home to the Warren Township Historical Society. Photo of Mother Rudd's, circa 1910. 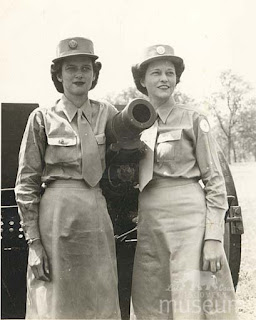 Happy Mother's Day! And remember to call your mother!