Aiken's fast and economical method of building concrete-walled buildings revolutionized construction and is still in use today. The process involves pre-fabricating concrete wall sections and lifting or tilting them into position on a concrete foundation.

Aiken was born in Abingdon, Knox County, Illinois. He came to Lake County, Illinois by 1895, when he was promoted to the rank of Colonel and assigned as the range officer at the new rifle training center at Camp Logan in today's Zion. Camp Logan was an Illinois National Guard training facility established in 1892.

Jannette was the daughter of George P. Kellogg and Phoebe F. Landon Kellogg. Jannette was also the granddaughter of Nelson Landon (1807-1884), one of Lake County's most influential and wealthy pioneer settlers. Jannette and Robert resided on her father's farm along the east side of Sheridan Road just south of Kellogg Creek in Winthrop Harbor.

Aiken came up with his idea of constructing buildings using pre-cast concrete walls and raising them into position in early 1907, when he built concrete target walls for use at Camp Logan. Previously, the Camp's targets were made of wood. The new concrete targets kept ordnance from being shot into Lake Michigan and endangering boaters, and allowed the lead to be retrieved and reused.

After filing for a patent on a "method and apparatus for constructing concrete buildings," Aiken built a factory to manufacture the concrete targets and steel target frames, and used his new tilt-up method to construct it. The factory stood on his farm in Benton Township along Sheridan Road and was 80 x 75 feet and 14 feet high. 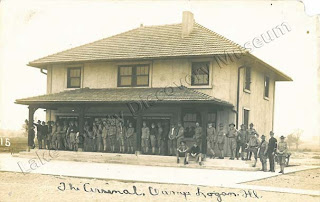 His next project was an ammunition and gun house at Camp Logan (above), and then a large mess hall at Camp Perry in Ohio. His first commercial store was built near Kenosha and was 30 x 40 feet with a cellar.

On November 14, 1908, Aiken organized the Aiken Cement Home company and incorporated it in the State of Maine (for tax purposes).

In 1909, he made plans to build a residential subdivision on his farm on Sheridan Road, using his tilt-up technique. The houses were to be concrete and two-stories high with six large rooms, front hall, stairways and bathroom. The subdivision was never built.

In February 1909, Aiken had a booth for his Cement Home Company at the 2nd Annual Cement Show held at the Coliseum in Chicago. The Chicago Tribune called him, "the novelty of the show" for demonstrating his invention of building concrete homes by actually constructing one inside the Coliseum. 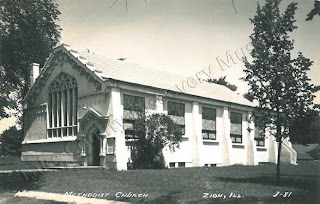 In 1910, Aiken completed a new church for the Memorial United Methodist at 2935 Sheridan Road in Zion (above). 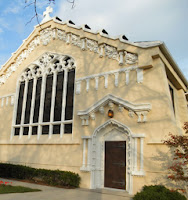 Detail of the church as it appears today. (above)

By 1910, Aiken had formed a partnership with Frederick H. Sears of Chicago with Sears organizing the Aiken Home Company of Chicago with offices at the Peoples Gas Building. Fred Sears expanded the company across the country, including in Los Angeles. The business was valued at $1,000,000.

It is unclear when and if Aiken and Sears parted ways.

In 1924, Aiken and his wife, Jannette, and her sister Josephine Kellogg, subdivided the northern portion of their property, south of Kellogg Creek into the "Kellogg's Home Site Subdivision." The site was improved with one and two bedroom concrete, Spanish-style bungalows that were rented on a daily basis to tourists. In addition, there was a campground and sandwich shop on site. This was Robert Aiken's last project using his method of tilt-up construction. 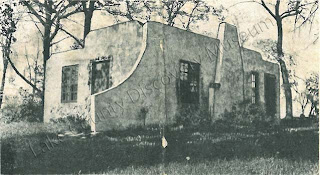 Josephine Kellogg was the proprietor of the tourist camp (above), which she named "Hollyhock Hill." Aiken's concrete bungalows are still visible today on Sheridan Road in Winthrop Harbor.

Aiken's tilt-up construction remains a dominant form of construction throughout the United States. He is honored each year by the presentation of the Robert Aiken Memorial Award at the annual World of Concrete Convention. 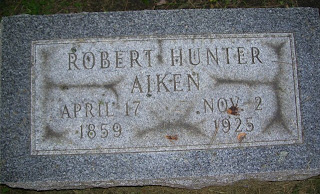 Special thanks to museum volunteer, Al Westerman, for his extensive research on Robert Aiken.