This handsome portrait of Levi H. Mead, from the collections of the Bess Bower Dunn Museum, prompted me to research his life in Newport Township, Lake County, Illinois and his service with the 65th Illinois during the Civil War. 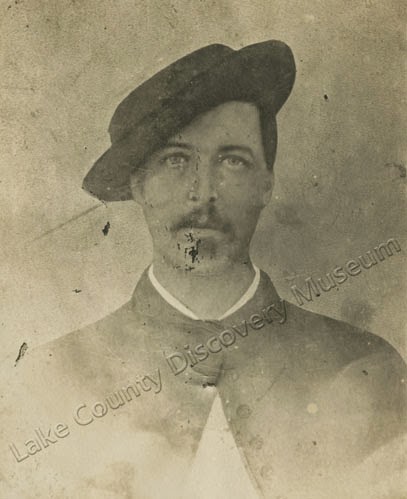 Levi H. Mead (1839 - 1864), circa 1862
(BBDM Collections)
Levi's roots in Lake County began about 1840 when he was just a baby. His family came to Lake County from Ohio. They first settled in Benton Township and then in Newport Township on the west side of Greenbay Road just south of today's 21st Street.
In 1850, the Mead family consisted of patriarch Edward Mead, who had served in the War of 1812, wife Ellen, and children: Sarah, Martha, Amanda, John, William Edward, Margaret, Levi, and George. All the children (except for the youngest) were born in Ohio where the family had spent many years.
In the summer of 1862, with the Civil War still raging, President Lincoln called for 600,000 more troops. In Lake County, James S. Putnam (1829 - 1869) of Waukegan was elected a captain in the 65th Illinois "Scotch Regiment" and set about recruiting men for Company F.
The 6' 1" farmer, Levi Mead, was one of the first to add his name to the company's rolls, joining on February 28, 1862. Levi's older brother John, joined on April 1st, and together they mustered in at Camp Douglas in Chicago on April 26.
The regiment was ordered to Martinsburg, Virginia and was among 14,000 troops under the command of Colonel Dixon S. Miles to hold Harpers Ferry. Unfortunately, General Robert E. Lee's forces were too much for them and on September 15, the Federals surrendered, the 65th Illinois among the prisoners.
The following day, the 65th Illinois was paroled and sent to Chicago.
During this "furlough," Levi married his sweetheart Amelia J. Wells. Amelia was the daughter of English immigrant John Wells. The Wells family had settled in Newport Township in 1843.
The Mead and Wells children were school mates at the Biddlecome School (later known as Lone Oak School), on 21st Street east of Kilbourn Road. It was a log school until 1857, when a new wood frame schoolhouse was built and the old school was moved onto the Shea farm where it was used as a barn. (Source: Biddlecome School History, BBDM)
On the afternoon of December 24, 1862, Levi and Amelia went to Pleasant Prairie, Kenosha, Wisconsin and were married in a "common" ceremony by Samuel H. Thompson, a minister of the Gospel.
It's unknown how long Levi was able to remain at home with his new bride, but in April 1863, the 65th was sent back the front.
By May, the regiment was serving in campaigns in East Tennessee, taking part in the battles around Chattanooga and in the defense of Knoxville. After a severe winter campaign over 1863 - 1864, the regiment reenlisted as a veteran organization.
On April 7, 1864, Mead mustered in as a veteran at Louisville, Kentucky. Afterwards, he and 400 comrades were given veterans furloughs and went home for an extended period.
When the 65th Illinois returned to the field, it joined General Sherman's Atlanta Campaign as part of the XXIII Corps. 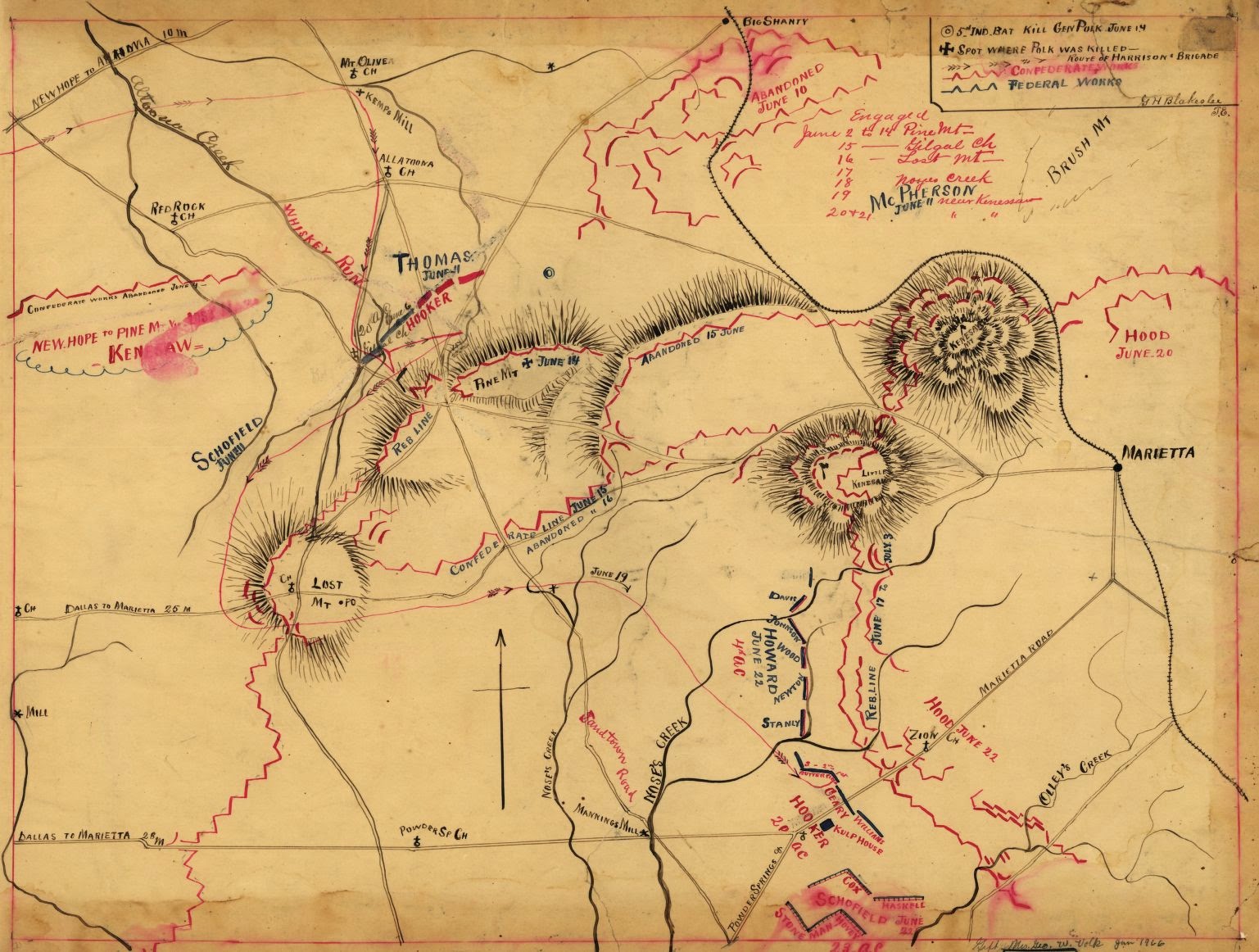 "Map of the environs of Pine Mountain, Lost Mountain, Kenesaw Mountain,
and Little Kenesaw Mountain"  by G.H. Blakeslee 1864.
(Library of Congress Geography and Map Division Washington D.C.)
On June 15, after over a week of steady rain, the regiment was brought into a fierce engagement with the Confederates between Kennesaw and Lost Mountains near Marietta, Georgia.
The Rebels fell back and on June 16, the 65th Illinois occupied their works. Over the course of the next few days from June 17 - 19, the regiment engaged the enemy in lively skirmishing.
While on the skirmish line on Friday, June 17, Levi Mead was struck by a musket ball in the throat and killed at Lost Mountain.
On the 20th, the advance was checked by a deep and almost impassable creek - the enemy defending the bridge with artillery and infantry. Volunteers being called for, about 50 men of the 65th Illinois stepped forward and charged across the bridge, driving back the enemy, and holding the position until the remainder of the Regiment crossed. 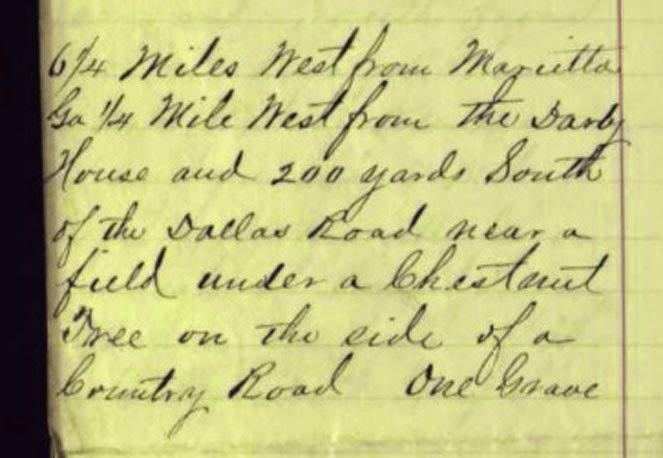 Description of locality where Levi H. Mead was first buried
"around Kennesaw" Mountain "under a Chestnut tree."
More than likely, Levi's brother John helped to bury him.
(From US Burial Registers, Military Posts and National Cemeteries records, 1862-1960, Ancestry.com).
On June 30, Orson V. Young of the 96th Illinois wrote home to his parents in Newport Township: "I saw Levi and John a few days before Levi was killed. I suppose his folks have heard all about it by this time." (BBDM 92.33.70)
Just twenty-three years old, Amelia Wells Mead was now a grieving widow with no children and no income. She set about making a widow's pension claim to the U.S. Government. This process included getting a certified copy of the public record of her marriage; testimony of her "widowhood" and good character from witnesses Azro D. Hutchins and Elijah Eddy; power of attorney given to Francis E. Clarke (brother of the late Lt. Col. Isaac Clarke of the 96th Illinois); and service and death record of her husband Levi H. Mead.
She further had to declare that she never "engaged in or aided and abetted the existing Rebellion."
In 1866, a program began to re-bury over 10,000 Union dead (including Levi Mead) from Sherman's Atlanta Campaign at the new Marietta National Cemetery.
Levi's brother John, also with the 65th Illinois, mustered out as a sergeant in Chicago on April 25, 1865. Three years later, John married his brother's widow.
John and Amelia had one child, Earnest E. Mead, born in November 1877. The family lived in Shelby County, Iowa; Kenosha, Wisconsin; and finally in Avon Township, Lake County, Illinois.
Amelia Wells Mead died in 1920, and John Mead in 1924. They are buried at Avon Centre Cemetery in Grayslake, Illinois.
~ ~ ~
Grateful appreciation to Patricia Harold  for providing confirmation of Amelia J. Wells' marriage to Levi H. Mead, and sharing copies of documents found on Fold3.com. Her connection to these events is through her stepmother, Marge Wells Copley, a g-g-grand niece of Amelia Wells Mead.
Posted by Diana Dretske at 1:19 PM 4 comments: