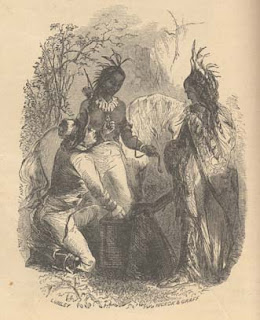 The private ownership of land was a European convention unfamiliar to Native Americans. Land came down to tribes from their ancestors, and in turn they passed over the stewardship to their children and their children's children for countless generations. American Historian, Clarence Walworth Alvord (1868-1928), wrote: "To allow the whites to use the land was one thing; to cede to them the permanent possession of the land was quite different." The permanent transfer of land became necessary with the pressures of westward migration that came with the opening of the Erie Canal in 1825 (which connected the Great Lakes with New York City via the Hudson River). The Erie Canal increased efforts to open northeastern Illinois to non-native settlement and brought hundreds of settlers into Michigan and Illinois. Often, mistakenly, the Treaty of Prairie du Chien (there were four between 1825-1830) is cited as the reason Native Americans left northeastern Illinois. In fact, it was not until the Treaty of Chicago in 1833 that the tribes in what is now Lake County, Illinois ceded the land to the U.S. Government. The Treaty of Chicago brought an estimated three thousand Native Americans, traders, government officials, army troops, land speculators, and adventurers to Chicago, then a small village. Aptakisic (Ah-be-te-ke-zhic) of the Half Day area Potawatomi was one of the leaders present. 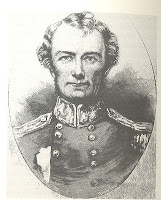 American author, Washington Irving (1783-1859), and Englishman, Charles J. Latrobe (1801-1875) (shown at right) happened to be in Chicago at the time of the treaty. (LaTrobe later became the first lieutenant-governor of the colony of Victoria in Australia). LaTrobe wrote about the event extensively in his book, "The Rambler in North America," published in London in 1835, and excerpted here from John J. Halsey's "History of Lake County, Illinois" (1912). Latrobe noted that the tribal chiefs did not wish to sell their land, but the U.S. commissoner said, "That nevertheless, as they had come together for a council, they must take the matter into consideration." Latrobe wrote of the scene on September 21, 1833: "The council fire was lighted under a spacious open shed on the green meadow, on the opposite side of the river from that on which the fort stood, [near the north end of the present Rush Street Bridge in Chicago]... Even though convinced of the necessity of their removal, my heart bled for them in their desolation and decline... and their speedy disappearance from the earth appears as certain as though it were already sealed and accomplished." 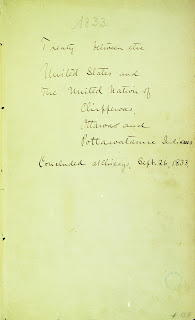 Cover page from "Treaty of Chicago" 1833. National Archives at Chicago.
Indeed, by September 26, 1833, the treaty was signed between the U.S. Government and the United Nation of Chippewa, Ottawa and Potawatomi Indians. Five million acres were sold to the United States including the last tracts of Native occupied Great Lakes’ land. The treaty stipulated that these tribes resettle west of the Mississippi River by the time the treaty was ratified by the U.S. Congress, which did not occur until 1835. However, fewer than half of the Potawatomi moved onto reservations in western Missouri and Kansas. Some went north into Canada, while others resettled in northern Michigan and Wisconsin. Settlement of the newly ceded land was not to occur until the treaty was ratified, which took place in 1835. Notably, the county's first non-native settler, Daniel Wright, arrived in 1833. Anyone who came into the region prior to the treaty's ratification was on their own should they encounter any difficulty with Native Americans. Wright fondly recalled that the local tribe assisted him with building his first cabin and in planting crops. Native Americans passed through Lake County for decades following the Treaty of Chicago. Many settlers were cautious of them, having heard stories of raids and kidnappings (true or not) from other parts of the country.
Posted by D_Dretske at 2:12 PM

Diana Dretske is the Curator and Lake County historian for the Bess Bower Dunn Museum (formerly Lake County Discovery Museum). The museum is a department of the Lake County Forest Preserves and nationally accredited by the American Alliance of Museums.
Use of material on this blog must be properly credited and may not be published without written consent. Contact ddretske@lcfpd.org Thank you!
This blog's subscription service has changed from Feedburner to follow.it. Current and future subscribers to the Lake County History Blog will receive new post notices from follow.it. New subscribers, please submit your email below.